Steven Seagal and President Maduro in the Miraflores Palace, Tuesday, May 4. Photo courtesy of Prensa Presidencial.

The famous US actor Steven Seagal visited President Nicolás Maduro at the Miraflores Palace this Tuesday, May 4, in a meeting full of symbolism about values such as international friendship, culture, cooperation, and fighting spirit.

For these reasons, the Venezuelan president thanked Seagal for his gesture. Seagal currently holds the position of special envoy of Ministry of Foreign Affairs of the Russian Federation, the country that also granted him citizenship. In addition, Seagal is a recognized master of martial arts, especially the discipline called Aikido.

The head of state expressed, through his Twitter account, that he felt honored by the presence of Seagal at the headquarters of the Bolivarian government, at a meeting that served to strengthen the relationship between the people of Venezuela and those of the United States and Russia.

RELATED CONTENT: US Affirms That With Its Allies, It Will Pressure Venezuela to ‘Return to Democracy’

After receiving him in the Presidential Office of the Miraflores Palace, President Nicolás Maduro invited Seagal to enjoy an exhibition by children and young athletes of the national Judo team . 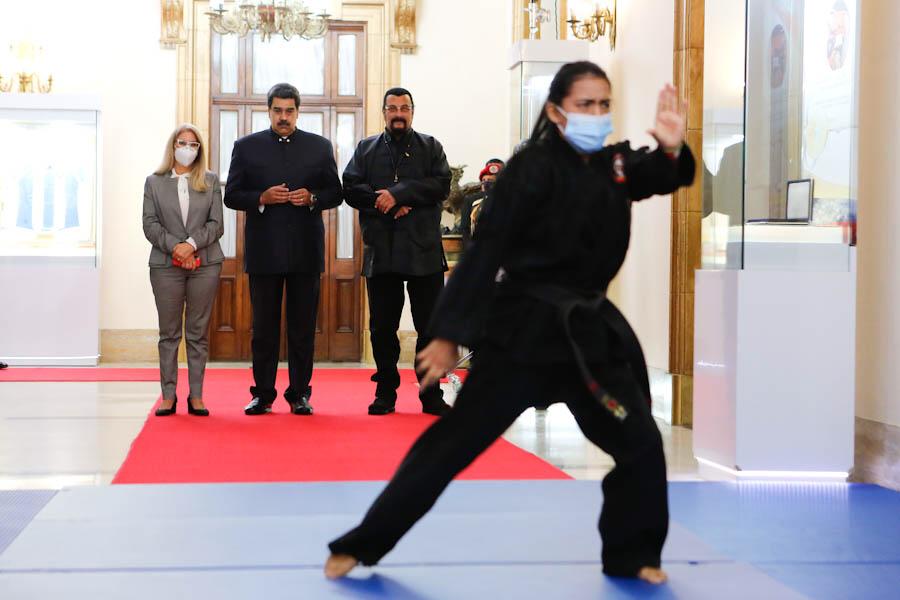 An activist for peace
American martial arts expert, musician, actor, and film producer Steven Seagal received Russian citizenship in 2016 from President Vladimir Putin. At the time, Putin also appointed him as a “special envoy to improve relations with the United States.”

Steven Frederic Seagal was born on April 10, 1952 in Lansing, Michigan (United States). He also stands out as an activist for world peace, and defines his friend Vladimir Putin as “one of the great living world leaders.”

On this occasion, the Venezuelan head of state received him as a special representative of the Ministry of Foreign Affairs of the Russian Federation. Seagal and Maduro also had the opportunity to share their taste for music, as Seagal was presented with a guitar as a gift “with the affection of the Venezuelan people,” to reiterate their gratitude for the visit.