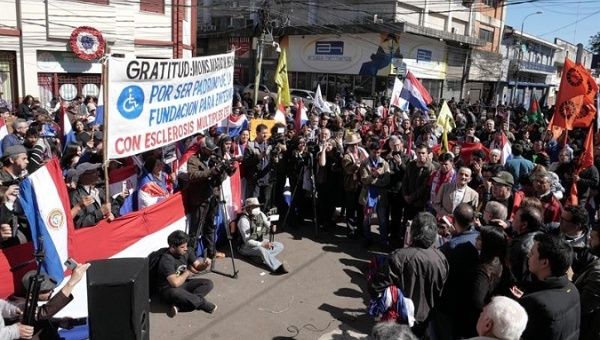 Local media revealed that the vice president’s legal advisor negotiated the exclusion of a clause in an energy contract to benefit a Brazilian company.

About two thousand people gathered in front of Congress and showed their support for the political trial, due to accusations of corruption acts linked to an energy contract which would see the state-owned electricity company’s spending increase by up to US$300 million.

Local media revealed last week that Jose Rodriguez, the vice president’s legal advisor, negotiated the exclusion of a clause to benefit Leros Comercializadora, a Brazilian company linked to the family of the far-right President Jair Bolsonaro.

Activists said the contract is “a betrayal of the homeland” and “surrender of sovereignty.”

The representatives of the Catholic Church called on the ecclesiastical hierarchy to listen to the demands of the people.”This is not a political act, this is an act of national cause,” said Bishop Melanio Medina, minutes before addressing the young people gathered in the square.

Medina accused Abdo Benitez and Velazquez of being aware of the negotiations with Brazil and demanded an investigation to clarify their participation in the controversial energy agreement.

RELATED CONTENT: President Maduro Ratifies his Love and Gratitude to the Venezuelan People One Year After Assassination Attempt

The call was supported by the Guasu Front (FG), the leftist formation led by the former president, Fernando Lugo (2008-2012), who also supports a political trial.

Senator Carlos Filizzola of FG demanded “zero impunity” in the investigations and accused the Paraguayan president of “hiding information from the public.”

“They have incurred in poor performance of their functions that are stipulated in the National Constitution and they have to be dismissed in a political trial,” he added.

The current political crisis of the current government has resulted in five resignations of senior officials, including Foreign Minister Luis Alberto Castiglioni.