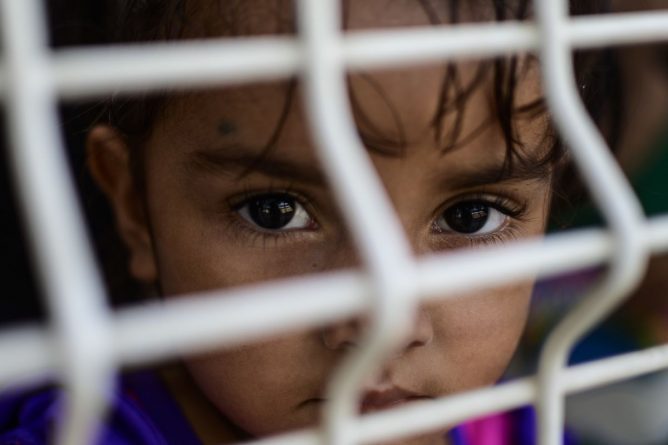 Lending even greater significance to the parallels commentators and historians have drawn between U.S. migrant detention centers and concentration camps of the past, the Trump administration is reportedly planning to hold more than a thousand immigrant children at an Oklahoma army base that was used as an internment camp for Japanese Americans during World War II.

According to Time, Fort Sill “has been selected to detain 1,400 children until they can be given to an adult relative.”

“Fort Sill, located southwest of Oklahoma City, was one of several internment camps where Japanese-Americans were held during World War II,” Time reported. “Between 1942 and 1946, the U.S. government forcibly removed an estimated 120,000 men, women and children from their homes and incarcerated them across the country. Fort Sill was later used to hold German prisoners of war.”

As Time pointed out, the horrific practice of detaining immigrants at the site of a former internment camp did not begin with Trump.

“In 2014, the Obama administration placed around 7,700 migrant children on bases in Texas, California, and Oklahoma, including Fort Sill. The temporary shelters were shuttered after four months,” Time reported. Under Obama, Fort Sill was used to detain around 200 children.

News of the Trump administration’s decision to send over a thousand children to the base as it detains a record number of immigrants was met with horror.

RELATED CONTENT: US Troops Deployed in Guatemala to ‘Halt Migration’

“We will look back at this moment in time and ask ourselves what we did to put a stop to these horrific, inhumane policies. Speak up. Speak out. Be on the right side of history.”

Echoing a sentiment that was common across social media, Yale legal scholar Tiffany Li added, “Those who fail to learn from history are doomed to repeat it.”

Having trouble absorbing this. How many times have we said ‘never again’? https://t.co/3n1tkgBgzA

It feels as though history can’t yell any louder than this.