Ignoring past Israeli prime ministers who warned that annexation of the West Bank would introduce legal apartheid to Israel, Benjamin Netanyahu said the first phase of annexations would go to the Cabinet on Sunday, reports Joe Lauria.

Within hours of the so-called Trump peace plan on the Palestine-Israel question being revealed on Tuesday Israeli Prime Minister Benjamin Netanyahu said he would propose the first phase of West Bank annexation to the Israeli cabinet on Sunday.

Netanyahu sprang into action after the plan, which he essentially created, was unveiled by Trump with Netanyahu at his side at the White House. It was the final piece of a strategy that only a U.S. administration as slavishly pro-Israel as Trump’s could give Netanyahu.

First the Israeli prime minister got the U.S. on Dec. 6, 2017 to recognize all of Jerusalem, including Arab East Jerusalem, as Israel’s capital with the move of the U.S. embassy there, something every previous U.S. administration had refused to do. 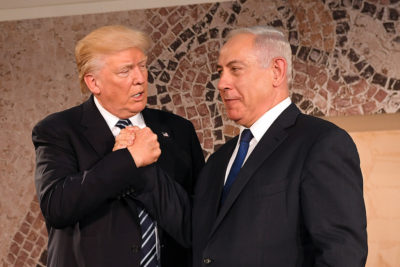 Then on March 25, 2019 Trump recognized Israel’s illegal 1981 annexation of Syria’s Golan Heights. Just three months ago Secretary of State Mike Pompeo declared expanding Israeli colonies on the West Bank as legal, a violation of the 4th Geneva Convention, which says: “The Occupying Power shall not deport or transfer parts of its own civilian population into the territory it occupies.”

The last piece Netanyahu needed was Tuesday’s much-awaited “peace plan” from the most anti-Palestinian administration in U.S. history.  Even The New York Times‘ coverage admitted the plan was strongly biased towards Israel and that Netanyahu was in on the secretive plan all along.

The operation was run by Trump’s son-in-law, Jared Kushner, whose family are close personal friends with Netanyahu.  It is a plan being imposed on the Palestinians rather than arising out of Palestinian-Israeli negotiations as past U.S. administrations tried to do.

The Netanyahu/Trump plan calls for new Israeli borders that intrude on Palestinian territory.  The Palestinian “state” envisioned includes no military force and the Israeli military would control and patrol the Palestinian border with Jordan.  In the deal Trump is trying to buy off the Palestinians’ aspiration for independence for $50 billion.  (On Tuesday, as the plan was being unveiled, Trump was facing an impeachment trial in the Senate and Netanyahu was formally indicted on corruption charges.)

If the Israeli cabinet approves Netanyahu’s first annexation proposal, which will include the Jordan valley, Palestinians living in annexed territories would come under direct Israeli rule but, under the plan, would not be allowed to vote in Israeli elections. That is the very definition of apartheid.  (Though Israeli law forbids Israelis living outside Israel–except for diplomats and military–to vote in Israeli elections, Israeli colonists, known euphemistically called “settlers,”–though living legally outside Israel–have had the right to vote.)

Netanyahu is simply brushing aside warnings that came from earlier Israeli leaders.

While many critics of Israel have pointed out that Israel was already running a de-facto apartheid system in its rule over four million Palestinians without rights, legal apartheid would come with annexation of the West Bank.  Negative public reaction to that appeared to be the reason annexation had been resisted by Israel until now.

No less than two former Israeli prime ministers have said so. “As long as in this territory west of the Jordan River there is only one political entity called Israel, it is going to be either non-Jewish, or non-democratic. If this bloc of millions of Palestinians cannot vote, that will be an apartheid state,” said Ehud Barak in 2010.

Three years earlier, former Israeli Prime Minister Ehud Olmert said: “If the day comes when the two-state solution collapses, and we face a South African-style struggle for equal voting rights (also for the Palestinians in the territories), then, as soon as that happens, the state of Israel is finished.”

A former Israeli ambassador to South Africa, Alon Liel, put it even more bluntly:  “In the situation that exists today, until a Palestinian state is created, we are actually one state. This joint state – in the hope that the status quo is temporary – is an apartheid state.”

RELATED CONTENT: UN Rejects US “Deal of the Century” 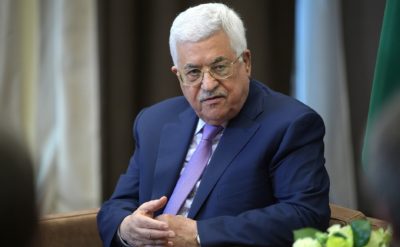 Apparently Netanyahu felt that the times had changed enough (for the worse) that Israel could withstand the negative regional and international outrage that annexation will cause.

Palestinian Authority President Mahmoud Abbas mocked Trump’s Deal of the Century as the “slap of the century.” And he told Trump where he can put that $50 billion.

Palestinian activist Fakhry Abu Diab told Al Jazeera: “It is obvious that Trump is repeating history by establishing a new Balfour Declaration. He [Trump] is giving away what he does not own, to people who have no right to it.”

International law professor Francis Boyle, who was an adviser to the PLO and Yasser Arafat, told Consortium News: “As this plan moves forward, I don’t think there will be much of Palestine to speak of. It will be Greater Israel. Then there will be another Nakba forcing a lot of Palestinians into Jordan: Jordan is Palestine.”

U.S. Senator Chris Murphy (D-CT) tweeted:  “This plan was negotiated with no one but the Israelis, and thus it’s not a peace plan at all. Peace can only be achieved through agreement between Israel and the Palestinian people. By setting these new terms, it makes it harder for Israel to compromise later.”

“Any claim that this plan envisions a Palestinian state is just false. The plan allows Israel to control all security matters inside the Palestinian ‘state’, and thus it’s not a state at all. The unilateral annexation of the Jordan River valley and existing settlements, deemed illegal under U.S. and international law, will set back the peace process decades. And it risks real violence and massive destabilization inside places like Jordan.”

Diana Buttu, a former Palestinian Authority spokeswoman, tweeted:  “Netanyahu is clear: Trump is the first world leader to say it is alright for Israel to steal land.”

Iran’s foreign ministry said in a statement: “The shameful peace plan imposed by America on the Palestinians is the treason of the century and doomed to fail.” Jordan warned against the “dangerous consequences of unilateral Israeli measures that aim to impose new realities on the ground.”

To make it work, Netanyahu needs the support of Arab governments that have long abandoned the Palestinian cause. In a statement, the United Arab Emirates’ ambassador to the U.S. Yousef al-Otaiba, portrayed Trump’s plan as  “a serious initiative that addresses many issues raised over the years.”

Saudi Arabia’s foreign ministry said it “appreciates the efforts of President Trump’s administration to develop a comprehensive peace plan.” The Egyptian government, which is dependent on Saudi financing, urged Israelis and Palestinians to “carefully study” the plan and said it appreciated the U.S. effort to solve the decades-0ld crisis.

Israeli troops were reinforced on the West Bank anticipating a violent reaction.

Joe Lauria is editor-in-chief of Consortium News and a former correspondent for The Wall Street Journal, Boston Globe, Sunday Times of London and numerous other newspapers. He can be reached at joelauria@consortiumnews.com and followed on Twitter @unjoe .