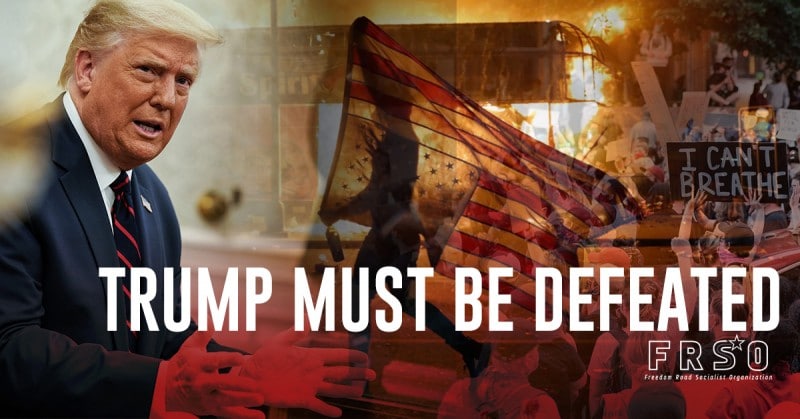 President Trump is a right-wing reactionary and dangerous fool to boot. He promotes an agenda of racism, inequality and discrimination. He puts kids in cages and then laughs about it. From Palestine to the Philippines he has shown himself to be an enemy of the peoples of the world, including those of us who live in the United States. Trump’s talk about “America First” is chauvinist trash, a banner under which to enrich the wealthy at the expense of everyone else. The trash needs to be taken out, as soon as possible, and this November at the latest.

Everyone knows that the pandemic has been made so much worse by the Trump administration, which has blended incompetence, opposition to science and subordination to business into a toxic brew that has taken the lives of 190,000 people. Contrast the Trump response with that of socialist China, where young people are returning to school, fewer than 5000 people have lost their lives and the pandemic is contained. Maybe, we need to start talking about the “White House virus.”

The economy is in a crisis not seen since the 1930s. Tens of millions have lost their jobs or livelihoods. Food lines are getting longer. By every measure, poverty is growing – hitting oppressed communities, African Americans, Chicanos and Latinos, Natives and Asian Americans the hardest. Workers need money and we need it now. Trump is steadfast in opposition to the $600 unemployment benefit and his executive order on assistance to the out of work is a cruel joke.

A great uprising is sweeping the U.S. and a powerful movement against police terror and racist discrimination has emerged. This country is a jailhouse for the oppressed and many want to escape. The flames that illuminated Minneapolis, Kenosha and other cities are a sign that enough is enough, and that the way things are has become intolerable. Trump has consistently greenlighted police killings. His endorsement of racist vigilante Kyle Rittenhouse, who killed two protesters in Kenosha, or his praise for the reactionary caravan that invaded downtown Portland show his vision of the future.

The upcoming election are in essence a referendum on the past four years, and we hold that it is important that everyone who can vote do so – and that you vote against Trump. The defeat of Trump and his ilk will create a more favorable context for the people’s struggle to advance.

That said, we need to proceed with our eyes open and the ability to distinguish friend from foe. The cold fact of the matter is that Biden is not a champion of working and oppressed people. He never has been and never will be. He is a tired, old corporate politician. While many are challenging police crimes and seeking community control of the police, Biden says he wants the police to have more resources. When Joe Biden says he is not a “radical socialist” he is telling the truth and he is telling us that he is not part of a real solution to the problems people in this country face.

In the U.S. today, both of the main political parties serve the rich and the powerful. For example, one of the reasons that current economic crisis is going to be so devastating is that Democrat President Bill Clinton carried out the largest single attack on the social safety net ever – his so called welfare ‘reform.’ We need something better. Something like the “radical socialism” that Joe Biden wants no part of.

No matter who wins the next election, we need to stay in the streets and fight for an agenda that reflects people’s needs. And we need to keep our eye on the prize. That means advocating for and building organization to achieve revolutionary change. The kind of change that sweeps away the current ruling class from power and puts power into hands of working people.