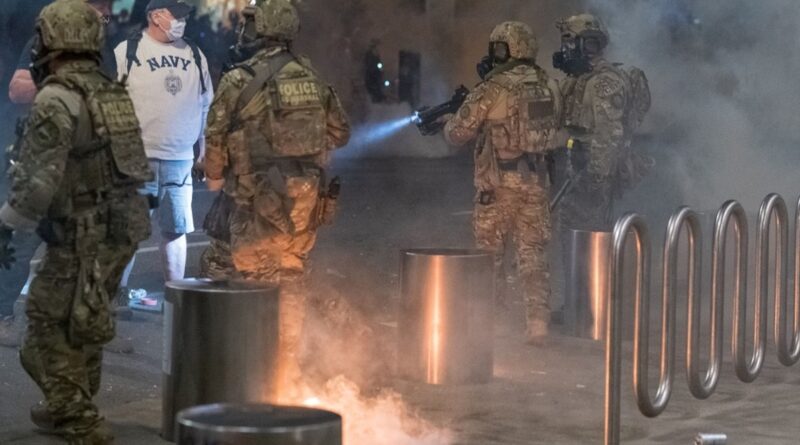 International Opinion US/Canada
July 23, 2020July 24, 2020 orinocotribune Black Lives Matter, Fascism, Federal agents, Mark Meadows, neonazis, Portland, Trump, US, white house
This is what fascism looks like. It spares no one.
By Juan Cole – Jul 21, 2020
Part of Trump’s reelection strategy is to scare the white suburbs, which polls show have soured on him, with “urban” (read: minority) violence. This is clear from his current campaign ads, which try to paint the gentlemanly Joe Biden as a bomb thrower.It now appears clear that part of that strategy is to send Federal agents dressed like Iraq War troops to Democratic-run cities, on the pretext of protecting Federal property, and then for them to attack and provoke Black Lives Matter and Defund the Police protesters, causing violence to escalate and using it … to scare the suburbs. The exercise also has the advantage for Trump of entrenching a new form of secret police and of turning Federal agents into instruments of his authoritarianism. White House chief of staff Mark Meadows has confirmed the plan to send the Feds into those cities.

Provoking social conflict so as to polarize society was part of the Russian hacker playbook in 2016. It is the preferred tactic of terrorist groups such as ISIL and the Neo-Nazis, since a polarized society is much easier to scare into submission.

Portland Mayor Ted Wheeler said on CNN on Sunday that the Federal presence and tactics had inflamed the situation and provoked the protesters.

Demonstrators came out again Sunday night for the 53rd night in a row in Portland, Oregon, demanding the defunding of the city police and supporting the Black Lives Matter movement, according to Tom Hallman, Jr. at Oregonlive.com

“The Pacific Northwest Youth Liberation announced a 7 p.m. meeting at Cathedral Park before marching to the Portland Police Bureau building at 7214 N. Philadelphia Ave., which houses the traffic division. It sits at the east end of the St. Johns Bridge. Others will likely congregate in downtown Portland, where the Justice Center and the Hatfield Federal Courthouse have been the epicenter of clashes with law enforcement authorities.”

The youth have in recent days mostly clashed with Federal agents sent by Trump on the pretext of protecting the Federal courthouse, and who have used provocative teargas and physical attacks on the protesters. Video posted on YouTube suggests that the Feds, with anonymized name tags and unmarked vehicles, attacked people simply for being in the street and made arrests without warrants or any probable cause. This behavior is unprecedented for Federal agents, who seldom make arrests and have in the past proceeded only with a court warrant. In other words, they are behaving like the Egyptian secret police.

RELATED CONTENT: A Constitutional Crisis in Portland
Saturday night, protesters had stormed the Mark Hatfield Federal Courthouse before being expelled by either police or Federal agents, and others had gotten into the Portland Police Association building, where someone set a quickly-extinguished fire.

On Saturday night, Zane Sparling of the Portland Tribune reports, a former naval officer and a Vet, Christopher David, who saw the Federal agents acting unconstitutionally approached them. He said he wanted to talk to them about how they were violating their oath of office. They beat him repeatedly with a baton, fracturing his hand in two places. It is in a splint and will require surgery. But he did not move, earning the moniker “Man of Steel” and “Captain Portland.” Then they pepper-sprayed him in the eyes, twice, and he retreated, stinging and half blind. He says he could have been killed.

No wonder that Federal agent did not want to wear a name tag.

Mr. David had every right to be on that street in front of the courthouse.

Mr. David is an example of how Trump’s scheme can backfire on him. Instead of a scraggly protester to scare the white suburbs with, his goons came up with a former commissioned officer in the Navy, whom they have put in the hospital for standing on the street. That is what Fascism looks like. It spares no one.

Featured image: Navy veteran Christopher David did not flinch while being beaten and later pepper sprayed by law enforcement officials in Portland, Oregon on July 18, 2020. (ACLU of Oregon/Doug Brown)

Juan Cole teaches Middle Eastern and South Asian history at the University of Michigan. His new book, The New Arabs: How the Millennial Generation Is Changing the Middle East (Simon and Schuster), will officially be published July 1st. He is also the author of Engaging the Muslim World and Napoleon’s Egypt: Invading the Middle East (both Palgrave Macmillan). He has appeared widely on television, radio and on op-ed pages as a commentator on Middle East affairs, and has a regular column at Salon.com. He has written, edited, or translated 14 books and has authored 60 journal articles. His weblog on the contemporary Middle East is Informed Comment.