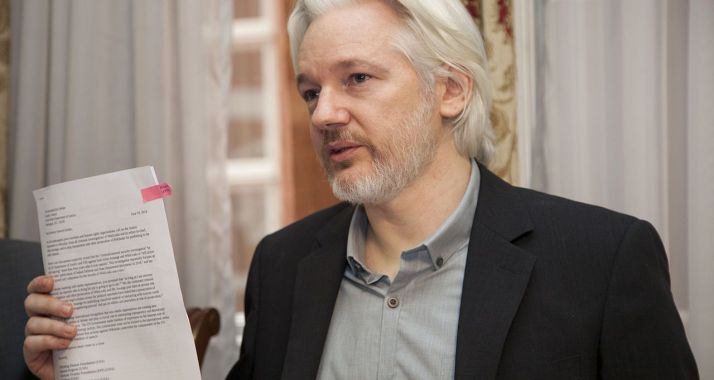 It is not just Trump, but the media, Obama, Bush, mainstream “human rights” organizations, Republicans and Democrats alike that put the noose around the neck of WikiLeaks publisher Julian Assange — threatening all journalists.

WikiLeaks publisher and political prisoner Julian Assange is facing 17 charges under the United States Espionage Act — a draconian law that was written during World War I to imprison leftists who spoke out against the mass slaughter.

How fitting, then, that 100 years later, this same ruthless statute is being used to muzzle the man who has done more than any other person alive to expose the misdeeds of the US national security state.

In its relentless assault on civil liberties, the Donald Trump administration has the dubious distinction of breaking two records at once: Indicting a journalist under the Espionage Act for the first time, and indicting a non-US citizen.

It is far from hyperbole to say that the US government’s campaign against Julian Assange is one of the gravest threats to press freedoms in modern history.

“This is madness,” wrote Wikileaks in response to the news of the indictment. “It is the end of national security journalism and the first amendment.”

The United Nations Working Group on Arbitrary Detention has declared multiple times that Assange has been unjustly detained for the past seven years, and must be freed and given compensation.

But now, the journalist could languish in an American dungeon for several lifetimes.

“The war on Julian Assange is now a war on all,” cautioned renowned journalist John Pilger. “The target today is Assange. Tomorrow it will be you on the New York Times, you on the BBC. Modern fascism is breaking cover.”

The New York Times has spent the past few years lying about Assange, smearing him and WikiLeaks as supposed Russian tools, in neo-McCarthyite screeds that are filled to the brim with insinuation and quotes from anonymous US government officials, but light on actual evidence. (“After Arrest of Julian Assange, the Russian Mysteries Remain,” fretted the newspaper of record in April.)

But even the Times has come to a rude awakening, warning in a report the night the additional 17 charges were announced that it is “a novel case that raises profound First Amendment issues … a case that could open the door to criminalizing activities that are crucial to American investigative journalists who write about national security matters.”

In a characteristically convoluted paragraph, the Gray Lady reluctantly acknowledged, “Though he is not a conventional journalist, much of what Mr. Assange does at WikiLeaks is difficult to distinguish in a legally meaningful way from what traditional news organizations like The Times do: seek and publish information that officials want to be secret, including classified national security matters, and take steps to protect the confidentiality of sources.”

BREAKING: For the first time in the history of our country, the government has brought criminal charges under the Espionage Act against a publisher for the publication of truthful information. This is a direct assault on the First Amendment. https://t.co/RJxjFPfkHe

CNN, too, had an eleventh-hour change of heart, warning that the case sets “up a major legal battle over First Amendment protections in the Trump era.” (Although this didn’t stop CNN analyst Asha Rangappa, a former FBI special agent, from delightedly effusing, “Awwwww yeah.”)

This came after CNN happily regurgitated US government propaganda that portrayed WikiLeaks as a Kremlin asset, implying that Assange was a useful idiot of the dastardly Russians.

NPR even praised the US government attorney who is trying to put Assange behind bars.

Putative “human rights” organizations also threw the WikiLeaks publisher under the bus. “Amnesty International does not consider Julian Assange to be a Prisoner of Conscience,” the organization asserted, adding that it “is not actively working on” his case. (UN human rights experts strongly disagree.)

This is the ultimate irony: The very same institutions and people that stand to lose the most from Assange being thrown in prison are those that helped put the noose around his neck.

Current WikiLeaks editor-in-chief Kristinn Hrafnsson voiced this sentiment tweeting, “I find no satisfaction in saying ‘I told you so’ to those who for 9 years have scorned us for warning this moment would come.”

I find no satisfaction in saying ‘I told you so’ to those who for 9 years have scorned us for warning this moment would come. I care for journalism. If you share my feeling you take a stand NOW. Either you are a worthless coward or you defend Assange, WikiLeaks and Journalism. https://t.co/NkUfZWYan8

And it was not just the corporate media that helped set the stage for Trump locking up a foreign journalist. The US war on dissident journalism — like most American wars — has been thoroughly bipartisan.

This assault on civil liberties began with George W. Bush and his fake “war on terror.” Barack Obama then expanded the crackdown by using the Espionage Act to charge more whistleblowers who leaked information to journalists than all previous presidents combined.

Journalist James Risen, who was himself a target of this Obama administration repression, wrote in The New York Times in 2016, “If Donald J. Trump decides as president to throw a whistle-blower in jail for trying to talk to a reporter … he will have one man to thank for bequeathing him such expansive power: Barack Obama.”

The brazen attack on Assange is one of many promises broken by Trump, who affirmed during his 2016 campaign, “I love WikiLeaks.”

But it is much too easy to put all the blame on the bigoted bogeyman. The tragic truth is that the blame goes around.

The reality is a President Hillary Clinton likely would have launched this same full-fledged attack on press freedoms. The Democratic presidential candidate put her stamp of approval on Britain’s arrest of the WikiLeaks publisher this April, insisting, “he has to answer for what he has done.”

So too would a future President Joe Biden, who as vice president under Obama dubbed Assange a “hi-tech terrorist” and mulled over prosecuting him.

The Department of Justice just declared war––not on Wikileaks, but on journalism itself. This is no longer about Julian Assange: This case will decide the future of media. https://t.co/a5WHmTCDpg

As journalists in the US and around the world now stare down the barrel of a gun, it must be said clearly: Everyone who demonized WikiLeaks and Julian Assange put the ammo in that weapon, paving the way for Trump’s historic attack on press freedoms.

Including and especially the media itself. Although, truthfully, it was not just the corporate media that smeared Assange; even some progressive, alternative media outlets played a role.

Certainly, the Trump administration and the far-right president himself are committing the crime — they will be the ones to pull the trigger in this unspeakable offense. But the media, Obama, Bush, mainstream “human rights” organizations, and a sizable majority of Republican and Democratic politicians alike put that gun in Donald’s hands.