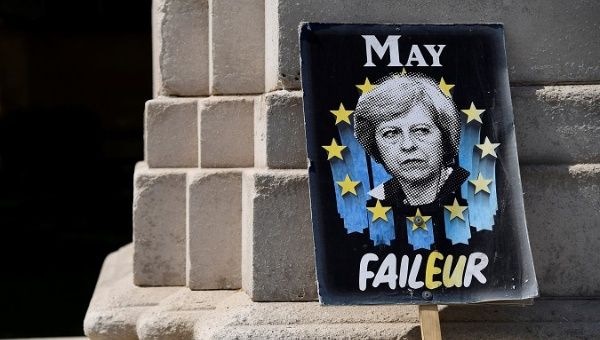 Who will replace Theresa May as Britain’s prime minister? teleSUR presents a list of the top U.K. contenders.

Within hours of UK Prime Minister Theresa May announcing her resignation, speculation has risen around the host of possible successors in line for the coveted seat in parliament.

On Friday, May revealed her plans to quit as leader of the Conservative Party on June 7, saying that during her tenure as prime minister, she had endeavored to make the U.K. a country that works for the many, not the few, and also to deliver Brexit.

Among the top contenders is Boris Johnson, the former British Foreign Minister — a favorite in public polls to succeed May due to his charismatic personality and experience in economically and socially liberal policies. Johnson also played a large role in the June 2016 Brexit referendum.

Also in the running is 56-year-old Andrea Leadsom, the former State Energy Minister and Environment Secretary. Although a firm supporter of a break with European Union (EU), Leadsom quit the House of Commons on Wednesday, after revealing reservations around the Withdrawal Agreement Bill. She believed the current approach could be dangerously divisive and not deliver the desired result.

Michael Gove, 51 years old, is Minister of the Environment and a strong candidate and supporter of May’s Brexit plans. He was Boris Johnson’s assistant during the referendum campaign in 2016. He is against a second referendum as he believes it is undemocratic and would be damaging for the U.K. and its integrity.

Another frontrunner for the role of Conservative party leader is Dominic Raab. Although Raab supports a departure from the EU, he left his position as Brexit Secretary just five months after accepting the post due to disagreements with the Brexit withdrawal agreement. He proposes lowering the income tax for the U.K.’s working class and improving employee rights for mothers.

Forty-nine-year-old and former business banker, Sajid Javid, stands a good chance of taking the seat as head of the party. He has expressed interest in the position and could bring a modern and multicultural outlook to the U.K.’s parliament. As home secretary, Javid has connections to both homeland security and the immigration ministry.

Finally just hours after May’s resignation, Foreign Secretary Jeremy Hunt had already stepped up and confirmed his intention to run for prime minister. He is believed to be the more moderate contender, between competitors Johnson and Raab. Hunt has led the British National Health Service for six years and initially defending the United Kingdom’s presence in the European Union, before moving to support May’s Brexit campaign.