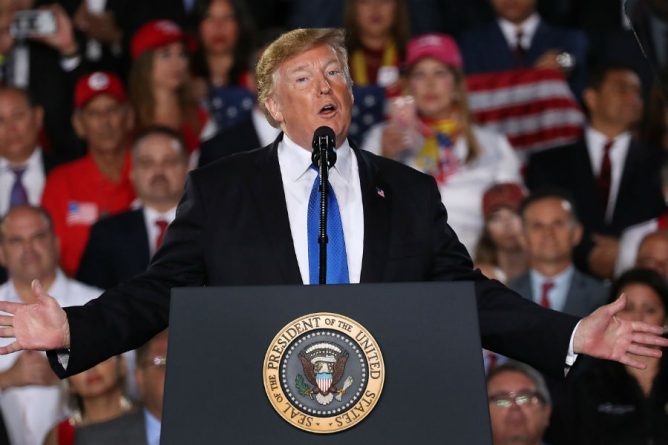 The words of the president of the United States, Donald Trump, to Oscar Pérez qualify as an act of support for terrorism, for the Venezuelan terrorist ex-policeman  who shot and threw grenades at two public buildings on June 27, 2017, after stealing a Venezuelan scientific police helicopter, and then carrying out other acts of terror. Trump called him “brave Venezuelan police officer” and “extraordinary and a great person.” His words were broadcast in the city of Miami, in a community event of Venezuelans living in that country, in what seemed an attempt to win over the inhabitants of the state of Florida with a view on the elections of 2020.

In his speech, Trump said about Pérez: “He is a brave Venezuelan police officer, you know the story.  In June of 2017, Oscar piloted a helicopter over the city of Baruta with a pennant that referred to Article 350 of the Constitution of Venezuela,” said Trump, omitting that Pérez carried out an armed attack in which he threw grenades and fired shots at public buildings where unarmed civilians worked.

“Oscar said he wanted to deliver and give hope to the people, that he loved the people, fought for the people and the people loved Oscar. But Oscar was shot and killed by these Venezuelan thugs, you already know the story: the Venezuelan security forces, which terribly decimated him”, he said.

The US president added: “Oscar gave his life for the freedom of his people, and today we have freedom thanks to extraordinary and great people like Oscar.”

Trump was accompanied by Pérez’s mother, who also spoke and asked for “justice” for her son, which was acclaimed by the attendees.

Who was Oscar Pérez?
On June 27, 2017, Oscar Pérez used his status as an inspector assigned to the Air Transport Division of Cicpc, to steal a helicopter from that agency and, from there, to execute an armed attack against the headquarters of the Supreme Court of Justice. (TSJ) and the Ministry of Popular Power for Interior Relations, Justice and Peace (Mpprijp) in Caracas. He and his companions fired 15 shots at the Mpprijp building on Urdaneta Avenue, where a party was held to mark the Day of the Journalist, and then four grenades were thrown at the TSJ , which housed a school that, fortunately, had already been vacated.

It is noteworthy that the attitude of many media when the attack occurred, was to dismiss and even imply that Oscar Pérez worked for the government and performed a  (false flag) auto-attack.

Subsequently, on August 6, 2017, the ex-military officer Juan Carlos Caguaripano led a group that carried out an armed attack against the Paramacay Military Fort, in the city of Valencia, Carabobo state, in order to appropriate weapons. After the attack, carried out mainly by civilians, 18 people were captured . Oscar Perez said in a video on social networks that this was related to his operation .

Subsequently, on December 18, 2017, Pérez was attributed the attack to a Command of the Bolivarian National Guard (GNB) located in Laguneta de la Montaña, in San Pedro de Los Altos, Miranda state, where he, accompanied by a group of men in ski masks, subdued those troops present, and stole 26 rifles, weapons and ammunition. Pérez posted a video on his Twitter account showing how they extracted the weapons.

One wonders how the United States would treat anyone who carried out terrorist acts similar to those carried out by Oscar Pérez, and what would happen if a head of state from another country praised these acts and treated their authors as heroes.

Two policemen were killed by Pérez’s group when he carried out his attack
On January 15, 2018, Oscar Pérez and his terrorist group were surrounded in a house in El Junquito, west of Caracas. While negotiating the conditions for their delivery, “they opened fire on the officials in charge of their capture and tried to detonate a vehicle loaded with explosives, with the unfortunate result that two officials of the Bolivarian National Police (PNB) were killed and 5 seriously injured”, said a statement from the Ministry for Internal Relations.

“Our troops were attacked by these violent people while the conditions for their surrender and safekeeping were being negotiated. The members of this terrorist cell that carried out armed resistance were killed and five criminals were captured and detained,” the statement said. Among the deceased were Oscar Perez himself.

On January 18, Diosdado Cabello disseminated details of what had happened. “They said one thing to those who were going to negotiate, but in social networks they said another,” Cabello said about the videos that Pérez and his group shared on Instagram through an account, EquilibrioGV, currently closed . They said: “We are going to give ourselves up,” but in social networks they said: “they are massacring us,” Cabello said.

One of the people killed by Pérez’s group was Heyker Vásquez, an intelligence officer and member of the Las Tres Raíces collective on January 23. Cabello pointed out that Vásquez “was sent to look after them” (Oscar Pérez’s people), to help them in the negotiation. “They send him to look after him because Díaz Pimentel (one of the members of Oscar Pérez’s group) is from the “23 de enero” neighborhood and he knew Heyker. He went to talk with them twice to give themselves up. They asked Heyker for cigarettes, he brought them cigarettes and said, ‘Tell your boss we’re going to give up.’ ”

Cabello explained that, as a result of the negotiation, police officers went in two vehicles to the site to stop the armed group. When they get out of the car, ” his very friend, Diaz Pimentel, murdered him as soon as he exited the car, with a shot in the chest. And they threw grenades at the 2 vehicles where the people who were going to arrest him were. He never showed a true will to surrender”,  he said.

Even as many opposition journalists and opinion leaders initially claimed that Oscar Pérez worked for the government and that the June 27 attack was an “auto-attack”, the international media took it upon themselves to clean up their reputation and turn the ex-policeman into a “hero”,  such as in the past was done with Orlando Bosch, Luis Posada Carriles and other terrorists involved in terrible events, such as the bombing of a plane of Cubana de Aviación on October 6, 1976, in which 73 people died .