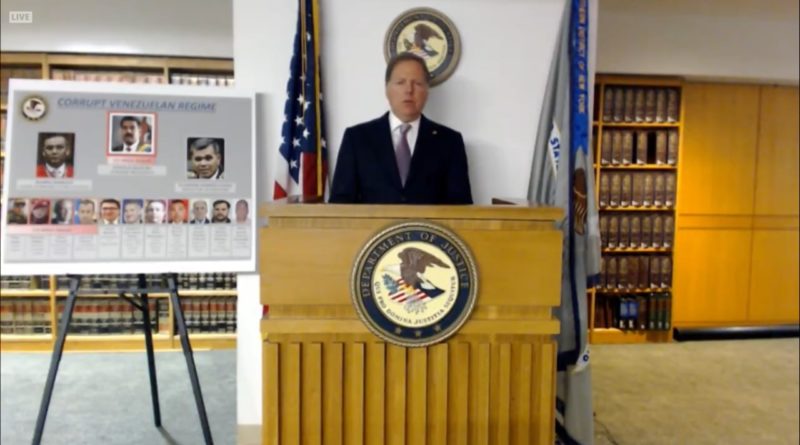 The government of Donald Trump announced this Thursday, March 26, that they offer a reward of $ 15 million dollars for the President of Venezuela, Nicolás Maduro, without presenting any evidence.

The US regime also accused other Venezuelan officials, among them the president of the Supreme Court of Justice (TSJ), Maikel Moreno; Defense Minister Vladimir Padrino López; and the head of the National Constituent Assembly, Diosdado Cabello, for whom it offered a $ 10 million reward for information leading to their capture.

This new attack against Venezuela comes in the middle of a pandemic due to the coronavirus and after Venezuela denounced new terrorist plans by the gringo president against the nation using Colombia as a base for terrorist plots.

Thursday afternoon Venezuelan Foreign Minister, Jorge Arreaza, read a communique denouncing the US government for, in the middle of the Coronavirus crisis, trying again to promote regime change in Venezuela, aiming at raising support for his [Trump’s] reelection bid in Florida state with a traditional cowboy – racist strategy.

Part of the statement reads: “Ironically, it is in Colombia where the drug is produced and the United States allows it to enter permitting its population to consume it wildly. The DEA has been the key international actor in the protection of drug production and processing in Colombia and the guarantor and vigilant of its transfer to the neurons of youngsters in the United States,” forgetting to mention that additionally the US has 7 military bases in Colombia allegedly to fight drug trafficking.

Here the text of the communique (our own translation):

The Bolivarian Republic of Venezuela denounces Donald Trump’s government, at a time when humanity is facing the fiercest of pandemics, for attacking again the people of Venezuela and its democratic institutions, using a new form of coup d’état on the basis of miserable, vulgar and unfounded accusations trying to minimize the high recognition that Venezuela has in the fight against drug trafficking fully demonstrated in different multilateral levels.

The policy of forced regimen change in Venezuela is doomed to failure. Offering rewards, in the style of racist cowboys from the Wild West, demonstrates the desperation of Washington’s supremacist elite and its obsession with Venezuela to achieve electoral gains in the state of Florida.

The deep frustration of the White House is a product of the peace that reigns today in Venezuela, whose authorities have managed to neutralize all the coup and destabilizing attempts planned and financed from the United States.

Likewise, Donald Trump’s government does not accept that, using its own and unprecedented model, Nicolás Maduro’s government is managing to adequately handle the threats of the Covid-19, in the face of the resounding failure that the US institutions have demonstrated in this matter.

It is appropriate to recall the world-renowned role that the Bolivarian government of Venezuela played in facilitating the negotiations and signing the peace agreement between the Colombian government and the FARC. Commander Hugo Chávez and Nicolás Maduro, first as chancellor and then as president, were key players in achieving such a relevant agreement for Colombian society.

Ironically, it is in Colombia where the drug is produced and the United States allows it to enter permitting its population to consume it wildly. The DEA has been the key international actor in the protection of drug production and processing in Colombia and the guarantor and vigilant of its transfer to the neurons of youngsters in the United States.

Today, through the declarations of those directly responsible, the allegations that the Bolivarian government has made over the planning of terrorist actions in Colombian territory, financed and directed from the United States, against the peace and stability of Venezuela are verified. This shows the absolute complicity and submission to the United States of the Colombian authorities, who by ignoring such serious complaints and dismissing the specific information that was timely provided to them, have lent their territory and resources for conspiracies against Venezuela, in frank violation of international agreements and the Charter of the United Nations.

The people of Venezuela and its Bolivarian government will face with truth all the attacks and lies that come from the main State that promotes terrorism and drug trafficking in the world. Venezuelan democratic institutions guarantee the protection of their Venezuelan people against any desperate action by the Donald Trump government. Venezuela’s independence is consolidated in the face of every attack by the decadent and infamous US imperialism.

An international analyst said to Orinoco Tribune: “They just missed putting on this crazy list the Ministry of Health, Education, Labor and Communications, to make it the first prosecution of an entire foreign government in history…this shows how desperate the US is amid its own coronavirus crisis and because all terrorist plots promoted by them in Colombia -against Venezuela- have been neutralized by Venezuelan authorities, but he’s also aiming at gaining some support for his re-election in the state of Florida.”