A map produced by the US Southern Command shows the main drug-smuggling routes in Latin America connecting Colombia and Ecuador with Guatemala and Mexico (Business Insider, 9/14/17).

In recent years, Western corporate journalists have turned to systematically citing unnamed sources and secret documents from the US national security state. Indeed, one would be forgiven for thinking it was standard operating procedure.

The Wall Street Journal (9/15/19) takes this “deep state” fan fiction genre to new heights with its latest on Venezuela, titled “Venezuela’s Hugo Chávez Worked to Flood US with Cocaine, US Prosecutors Say.” 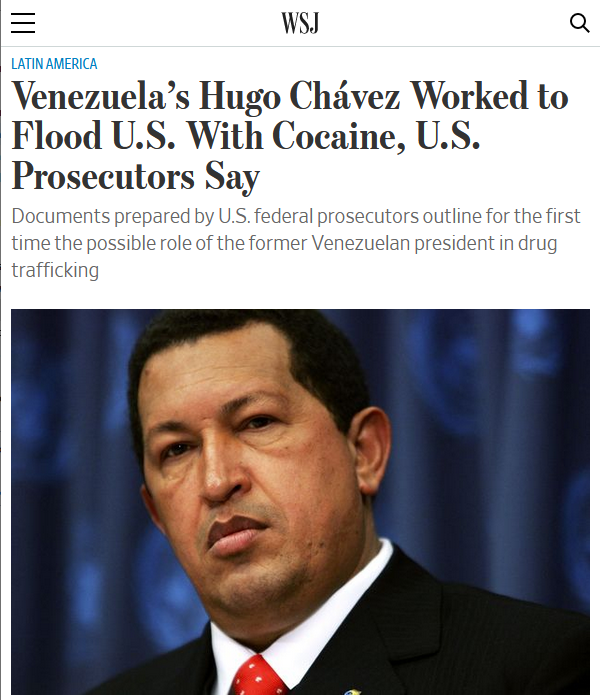 As advertised, the Journal’s Juan Forero echoes allegations against the Venezuelan government by US officials, which are contained in undisclosed “documents obtained by the Wall Street Journal.”

There is only one slight problem with this news: It’s not new, and is based entirely on the word of US prosecutors and defector-turned-witness testimony.

Like the conspiracy theory of Hezbollah activity in Venezuela, which Nicholas Casey recently dusted off for the New York Times (5/2/19), allegations of Chavista drug trafficking count among the corporate media’s favorite Venezuela soundbites.

At the time, the New York Times (9/12/08) and other outlets repeated the allegations, while ignoring then–OAS Secretary General Miguel Insulza’s testimony before the US Congress that there is “no evidence” tying Venezuela to the FARC. 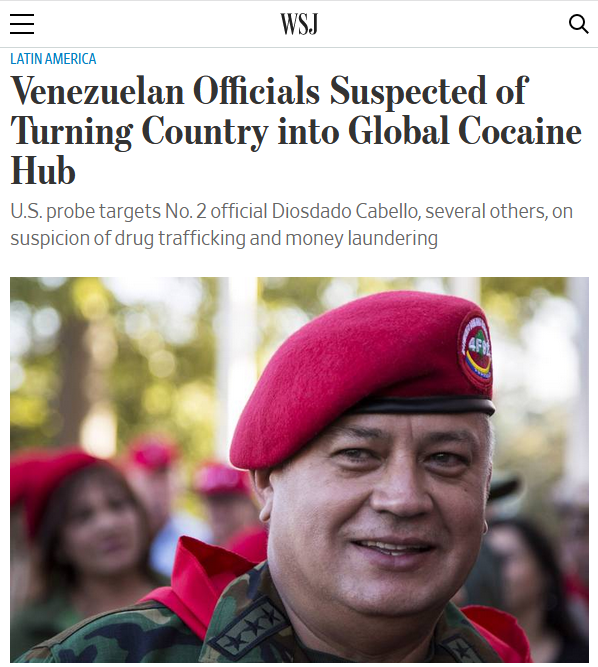 The Guardian (2/12/08), ever willing to serve Washington’s foreign policy interests, also debuted its own bombshell “investigation” in 2008, headlined “Revealed: Chávez Role in Cocaine Trail to Europe.” All these spectacular claims rely on the testimony of anonymous intelligence officials and alleged FARC deserters, to whom readers are expected to give the benefit of the doubt.

Fast forward to 2015, the Journal’s Forero and Jose de Cordoba (5/18/15) quoted unnamed Justice Department officials accusing Venezuela’s ruling Socialist Party’s No. 2, Diosdado Cabello, of heading a drug cartel. No evidence was presented to support the claims, and the Justice Department has, four years later, yet to unseal an indictment against Cabello.

Forero’s latest article rehashes the same allegations regarding the mythical “Cartel of the Suns,” but extends them to taint late President Hugo Chávez, who is purported to have “wielded cocaine trafficking as a weapon.”

Most of Forero’s report is an uncritical recitation of the claims contained in the “documents.” Unsurprisingly, all of the sources mentioned are Venezuelan government defectors, who have a clear incentive to fabricate information in order to secure their status in the United States and protect themselves against possible prosecution.

Since 2015, the Journal has reported the Justice Department’s “star witness” to be former Chávez bodyguard Leamsy Salazar, who defected to the US in 2014. Over the subsequent years, Salazar has proven himself a steady source of wild, unsubstantiated allegations involving Cabello and other top Bolivarian officials that have been repeated by corporate journalists.

On this occasion, we are expected to take at face value Salazar’s claims of having seen “what appeared to be cocaine” shipped on Venezuelan speed boats, overhearing Chávez order weapons for the FARC over the phone, and witnessing the late president promise to divert funds from state oil company PDVSA to the guerrilla group.

Forero does not cite additional, independently verifiable evidence that might support these allegations, which suggests that the Justice Department doesn’t have any.

This procedure is repeated with other state witnesses, including former Venezuelan Supreme Court Justice Eladio Aponte, who “fled to the US in 2012 and has been a witness on drug cases, said a person familiar with his role in the investigations.”

Here Forero commits a particularly glaring omission. Aponte only fled Venezuela with DEA help after he was identified as the business partner of Venezuelan drug lord Walid Makled. As we examined in the case of the drug-trafficking accusations against current Industry Minister Tareck El Aissami, US officials and corporate journalists have frequently drawn unproven links between Makled and high-ranking Caracas officials, despite the former being handed a 14-year sentence by a Venezuelan court in 2015.

In lieu of incorporating other perspectives that might challenge the US prosecutors’ claims, Forero opts to consult “experts” more than willing to echo them. He quotes Zair Mundaray, a former prosecutor who fled to Colombia in 2017. Mundaray served as No. 2 in the public prosecutor’s office under former Attorney General Luisa Ortega Diaz.

Forero again suppresses crucial details, namely that Ortega was herself accused of running an extortion ring from her office, prompting her successor to open various high-profile graft probes in 2017–18. Nor does Forero mention that Mundaray is currently serving as “legal advisor” to self-proclaimed “Interim President” Juan Guaidó’s “embassy” in Colombia, giving him all the more motivation to proffer damning “information” about Chávez and Chavistas to US prosecutors and journalists.

In another case, the Journal correspondent cites an anonymous US ex-official to confirm what other unnamed US officials have alleged in an undisclosed “document”:

A former senior US official who was shown the documents filed in Spain said it was the first time he had seen American authorities alleging that Mr. Chávez’s sponsorship of drug trafficking constituted a formal strategy to debilitate the US “That said, it makes sense for a regime that has long seen itself in an asymmetric war with us,” said the former official.

Very far from “speaking truth to power,” corporate media have almost completely surrendered the floor to anonymous US officials, allowing the official narrative to go unchallenged.

The Journal report, while not original in content, has the novelty of patching together half-baked claims into a Machiavellian plan hatched by Chávez himself. With Washington and Western media previously going after high-ranking figures such as Cabello and El Aissami, this time the target is the legendary leader of the Bolivarian Revolution. The story reads as a substitute script for the new season of Amazon’s Jack Ryan, which came under fire for its fantastical plot premise of Venezuela requiring US intervention after acquiring a nuclear weapon—no doubt the fantasy of recently fired National Security Advisor John Bolton.

Crucially missing is the historic fact that it was the CIA, not Chávez, that flooded US inner cities with crack cocaine in the 1980s as part of the Iran/Contra operation, of which current US special envoy to Venezuela Elliott Abrams is a veteran. The only thing Venezuela’s former president shipped to poor urban communities was free heating oil every winter.

Reading Forero, one almost loses sight of US authorities’ active complicity, both at home and abroad, in the drug trade. Cocaine is consumed first and foremost in the United States, and its profits have been laundered by the US-dominated financial system. Meanwhile, the DEA’s ever-growing multi-billion dollar budget has done nothing to fight the booming drug trade (assuming that is the goal). In fact, US-allied Colombia is the world’s largest cocaine producer and the source of 90 percent of the cocaine seized in the US, according to the State Department. Furthermore, the drugs are transported to the US mainly through Central America and Mexico, all countries with a heavy presence of US agencies.

The “Communist narco-terrorist” conspiracy theory invented by the US national security state and its far-right Colombian allies serves to conflate Colombia’s drug and guerrilla problems, with the FARC a convenient scapegoat. For one thing, the FARC was involved in the drug trade only at its lowest levels, levying taxes on coca sales. Moreover, since the 2016 peace accords and FARC demobilization, coca crops in Colombia have reached record levels year after year, confirming that the guerrillas played no major role in the illicit trade.

“The corporate grip on opinion in the United States is one of the wonders of the Western world,” Gore Vidal remarked. “No First World country has ever managed to eliminate so entirely from its media all objectivity—much less dissent.”

Even Forero outdoes himself by this standard, producing what is for all intents and purposes a press release for the US Justice Department.

The goal is never to prove anything or present substantive debate, but to further poison the well of US public opinion against Venezuela, legitimating regime change as US state policy. Rather than victims of murderous US sanctions, Venezuelans are depicted as the purveyors of an anti-American drug war. In fact, the most egregious dealers of death and deceit in the hemisphere are, as always, US policymakers and their stenographers in the corporate media.

Featured image: A map produced by the US Southern Command shows the main drug-smuggling routes in Latin America connecting Colombia and Ecuador with Guatemala and Mexico (Business Insider, 9/14/17).