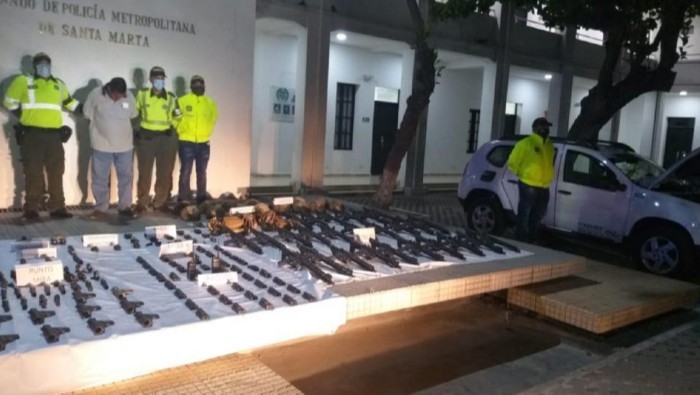 Clíver Alcalá, a retired Venezuelan General, was accused on Wednesday by the Venezuelan government as the organizer of three training camps in the Colombian city of Riohacha to carry out terrorist acts in Venezuela and to try to overthrow the government of Nicolás Maduro. He said Thursday in a telephone interview with the Colombian media “W Radio” that the arsenal seized last Monday in Colombia was his property and that he was going to use it in an attempted coup against the Venezuelan head of state. He noted that he was coordinating the delivery of the seized weapons – including 26 AR-15 rifles, chargers, night sights and telescopic sights – to “alias Pantera,” described by him as “an officer under his command.”

Robert Colina Ibarra, alias Pantera, was Andrés Izarra’s security chief when he was Minister of Communication and Information in 2012, and is now a deserter, according to Jorge Rodríguez , Venezuelan vice president of communication, at a press conference last Wednesday.

In the interview to W Radio, Alcalá reported that these weapons were bought as part of an agreement between him and Venezuelan deputy Juan Guaidó, with US advisers, which were intended to be used in an operation against Nicolás Maduro. According to Alcala, the signature of JJ Rendón, a Venezuelan psyop advisor, also appears in the contract. He confirmed that he has lived in Barranquilla for two years. According to him, “no Colombian authority knew about the operation that we had been preparing against Venezuela. Neither President Iván Duque nor the military Forces. They only found out 48 hours ago.”

The highly sophisticated military equipment was seized on the highway between the Colombian cities of Barranquilla and Riohacha.

The vehicle was driven by Jorge Alberto Morales Duque , who when questioned by the Colombian authorities about the origin and destination of the weapons, replied that he had received them in Barranquilla and had to transport them to Riohacha, where he would meet a subject identified with the alias of ‘Pantera’.

On Wednesday, Venezuela’s vice president of communication, Jorge Rodríguez, announced at a press conference that the arsenal was intended for one of three terrorist groups that plan to carry out destabilization actions in Venezuela, including the placement of explosives, attacks on military bases and murder of political and military leaders. Alias Pantera is the head of one of the three terrorist groups.

The complaint was reiterated that same night by President Nicolás Maduro, who reported that the original plan was to activate these groups in the march called by Juan Guaidó on March 10, but that the plans were deactivated due to poor attendance, and they decided to postpone the plans to carry them out until between March 23 and 25. He called on Venezuelan armed forces to be very alert.

RELATED CONTENT: Colombia and the US to Carry Out Military Exercises on the Border with Venezuela

Alcalá Cordones is one of the 14 people who appear on a list published this Thursday morning by the Department of Justice and the United States Department of State, in which they accuse the legitimate Venezuelan President, Nicolás Maduro, of drug trafficking; the president of the Constituent Assembly of Venezuela, Diosdado Cabello, and 12 other people. Alcalá assures that he appears on the list – in which 10 million dollars are requested for his head – because “a Venezuelan citizen was captured with the arms shipment that he had coordinated”, and said that he was going to request his removal.

Questions
The journalist and president of Telesur, Patrica Villegas, posted via Twitter that the interview leaves many questions that must be resolved:

The journalist reported that, according to Alcalá, the plan is the work of Guaidó and of American advisers, and the money is used to “liberate Venezuela”, which implies that “the money from Venezuela that Juan Guaidó manages is used to buy weapons.”