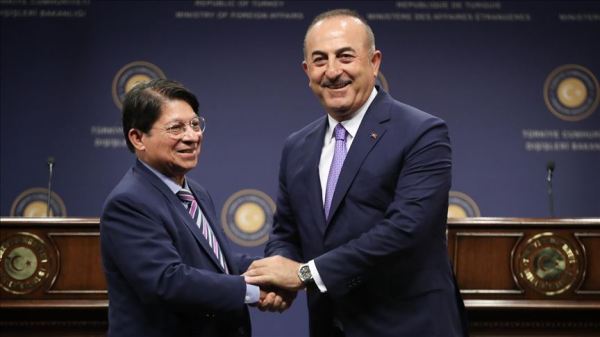 Turkey rejected the sanctions of the US and its allies against the government of Daniel Ortega, and signed agreements with Nicaragua to increase cooperation between the two nations.

In a joint press conference held in Turkey’s capital Ankara, alongside his Nicaraguan counterpart, Denis Moncada, the Turkish Foreign Affairs Minister Mevlüt Çavuşoğlu expressed his opposition to illegal economic coercive measures that hegemonic governments unilaterally and illegally apply against countries such as Nicaragua.

Çavuşoğlu highlighted that these types of measures obstruct the resolution of any internal issues within nations.

“We are against sanctions, whether they are against Iran, Venezuela, Cuba, or Nicaragua. Problems cannot be solved with sanctions or exclusion,” the Turkish foreign minister told the press on Wednesday, October 13.

In recent years, the US government and the European Union (EU) have resorted to a variety of coercive measures, including unilateral “sanctions,” to pressure countries that are not submissive to their policies. In the case of Nicaragua, its president Daniel Ortega openly rejects imperialism.

Nicaragua and Turkey expand cooperation
According to a note issued by the Turkish foreign affairs ministry, both foreign ministers agreed to expand cooperation in the areas of agriculture and construction, and to inaugurate their embassies reciprocally.

“During the meeting, memorandums of understanding were signed for education, political consultations between the ministries for foreign affairs and protocols, and both ministers also signed an agreement to develop relations and the level of cooperation between the two nations,” stated the text.

Çavuşoğlu also referred to the next presidential elections that Nicaragua will hold and expressed his desire that the electoral process take place in a manner that contributes to the country’s stability.

Some 4.7 million Nicaraguans are summoned to the polls on November 7. Ortega and his wife, the current vice president Rosario Murillo, are running as candidates of the ruling party of Nicaragua, the Sandinista National Liberation Front (FSLN).

Nicaraguan authorities accuse the opposition of exercising “coup terrorism”  with the financial support of the United States, to incite instability in the country and remove Ortega from power.