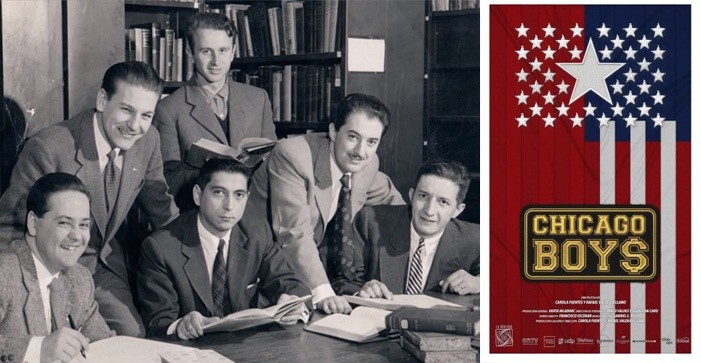 Yesterday, I got last minute notice of a talk on the Chilean protests at (of all places) the University of Chicago. I didn’t know exactly what to expect but what I encountered was far more sinister than I could have imagined. A room full of technocrats- and soon to be 21st century Chicago Boys- dissecting the protests in Chile. I almost got security called on me, the lady next to me complained about my manner of talking ‘gesticulating’ with my arms lol, and I was called a violent machista for interrupting a white Chilean lawyer who was saying some right wing bullshit but I stuck it out to get a full report on what the enemy is thinking right now. Some takeaways:

Thank you to my father, a survivor of Pinochet’s murderous concentration camps, who alerted me, invited me, and accompanied me to this event at the University of Chicago. Without him, I would have been the only voice in the room speaking to the realities of the demands of the people on the street in Chile. His presence gave me the courage to speak up as he also voiced support for protestors in Chile, speaking from a perspective of having recently been on the frontlines of some of the elders’ ‘cacerolazos’ on the streets of Santiago.

We must keep our eyes on Chile. It is the canary in the coal mine. Privatization and vicious neoliberalism have ruled in Chile since the late 1970s, an economic experiment that saw Chilean people subjected early on to some of the heartless austerity measures we see imposed worldwide today. How the Chilean people respond to this new crisis in capitalism, how those of us living in the belly of the beast support those Chileans on the streets demanding a life of dignity from Arica to Punta Arenas, will be crucial in determining whether this current crisis brings us one step closer to fascism or liberation.