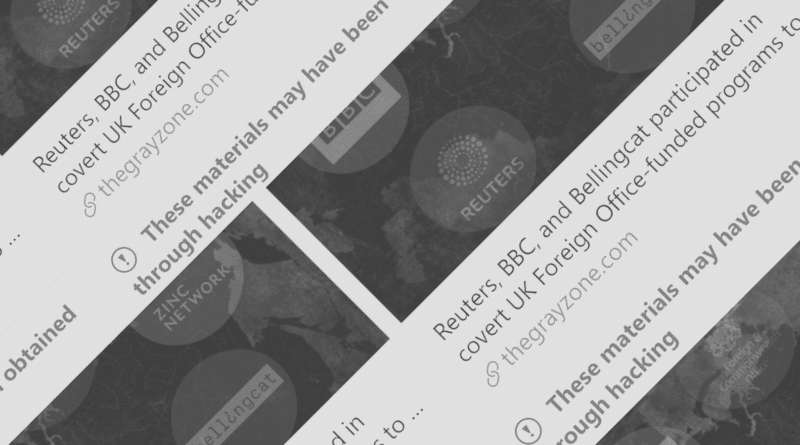 “The new Twitter scare label illustrates the threat our kind of factual reporting presents to a national security state that must employ social media censorship to conceal its agenda from the public.” — The Grayzone’s Max Blumenthal

San Francisco — “These materials may have been attained through hacking.” That is the warning message that any Twitter users coming across a recent Grayzone investigative report are met with, replete with a large exclamation point (!) signaling danger.

The report, penned by Grayzone’s editor Max Blumenthal, exposes how influential media outlets like Reuters, the BBC and Bellingcat have been secretly working hand in hand with the British government’s Foreign and Commonwealth Office (FCO) to promote regime change inside Russia and lead a campaign of demonization against it internationally.

However, Twitter, which itself was exposed as having intimate ties to the UK military and secret services, attempted to suppress the report’s spread. Those attempting to retweet posts containing a link to the Grayzone article were met with another alert about sharing hacked information. Many users also claimed that interacting with the post caused their Twitter apps to crash.

Blumenthal saw the decision as an attempt to stifle unwelcome revelations, telling MintPress this morning:

“By applying a scare label exclusively to my article, Twitter has contributed nothing to the public’s understanding of news or disinformation. Instead, it has confirmed the veracity of my reporting, which shows some of the most powerful and esteemed news organizations acting as UK Foreign Office-funded information warfare weapons. Further, the Twitter scare label illustrates the threat this kind of factual reporting presents to a national security state that must employ social media censorship to conceal its agenda from the public.”

The Grayzone maintains that the documents it used were leaked, not hacked. Yet the line between the two is not always clear. Anonymous leaks are the lifeblood of journalism. But without a name to go with a document, it is virtually impossible to prove good intentions on the part of the leaker. Governments and other powerful entities or individuals can consequently claim that any information portraying them in a bad light was hacked, shutting down any discussion or reporting of it online. This has already happened with YouTube, which announced in August that it would remove all content containing hacked information.

Twitter did not extend the same warning label to The Intercept’s recent article on the Chinese police force’s treatment of Uyghurs in Xinjiang province, nor to The New York Times’s report on Texas Senator Ted Cruz’s trip to Cancun amid a winter blackout in his home state. Both of these stories were based on confidential information that was either leaked or hacked. According to Twitter, the Grayzone report was the first time they used their powers to slap on the label.

“Twitter is ad hoc inventing new soft-censorship tools as leaked information reveals clandestine military intelligence disinformation networks operating across a variety of mainstream news outlets,” journalist Dan Cohen, who has published with the Grayzone (as has the author of this article), told MintPress. Others, such as the host of the “Chapo Trap House” podcast, Will Menaker, joked that the warning sign was actually a new feature that alerted users to “journalism that is especially important.” Meanwhile, Ian Goodrum, a journalist from China Daily, shared a doctored image of the warning message that read “These materials make the US State Department mad.”

What Twitter did not expect to happen was for its massive user base to turn the warning label into a meme, sharing pictures and joke information along with a link to the Grayzone report, ensuring that the phrase “These materials may have been attained through hacking” was prominently displayed on the tweet. At the time of writing, a new tweet featuring a link to the article was being sent around once every 25 seconds, turning the situation into the latest example of the Streisand Effect — a phenomenon whereby attempts to remove, suppress or censor information has the unintended effect of further publicizing it.

But it has backfired as gaming twitter turned their warning messages into a meme.

This tweet will come with a warning label too. https://t.co/OGSKQ01pJG pic.twitter.com/RisWmNqEZN

“It was thanks to the creativity and utterly hilarious intervention of thousands of Twitter users, who discovered that the scare label was prime meme material, that the censorship could not be swept under the rug. Now Bellingcat is trending, and not for the reasons its UK FCO-backed directors would like it to be,” Blumenthal told us.

The Grayzone has long been on the receiving end of strongarm tactics from internet giants. Like MintPress, it was fully censored from Wikipedia last year, meaning that it is no longer allowed to be used as a source. It has also felt the wrath of Google’s algorithmic changes, meaning that it will rarely appear as the top result for many searches, throttling traffic to the site.

Twitter also announced yesterday that it was deleting hundreds of accounts linked to Russia. Among the primary reasons it gave for the decision was that these users were “undermining faith in the NATO alliance.” It appears that, as big tech and big government become increasingly indistinguishable, there will be a diminishing ability to expose or challenge the actions of Western nation-states online.