“Our girls are spending the summer learning code and growing the sisterhood,” the feminist nonprofit, Girls Who Code, tweeted recently. “And it’s all thanks to partners like @raytheontech, who keep supporting our girls no matter what.”

Raytheon Technologies, one of the world’s largest arms companies and a major supplier to the British Ministry of Defence (MoD), recently teamed up with Girls Who Code to close the gender gap in science and technology.

Girl Scouts are passionate about making the world a safer, better place, and thanks to @Raytheon, we've now got some badges for that! Think Like a Programmer Journeys are kicking this #STEM thing up a few notches. Our girls are ready. 💪 pic.twitter.com/flaazUTidv

Together they hope to “inspire the next generation”.

Whenever Raytheon isn’t inspiring young girls, though, it keeps itself busy by manufacturing guided missiles. In 2014, Raytheon U.K. secured its first export contract for the Paveway IV missile to Saudi Arabia — a £150 million deal for the sale of 2,400 bombs.

Since then, Raytheon has been a reliable supplier to Riyadh’s military campaign in Yemen, where thousands of civilians have been killed in air attacks.

The company supports young girls “no matter what” — that is, apart from those who were obliterated at a funeral service in 2016 when bombs traced back to Raytheon killed over 140 people.

Or those who were burned alive and torn apart when Raytheon-made bombs hit a wedding party in 2018.

Apparently, though, none of this is at odds with the company’s feminism. In fact, just two days after the wedding airstrike, Raytheon was busy tweeting about its new program being “all the inspiration a girl scout needs.”

This partnership may seem ludicrous, but it is just one example of a growing trend.

In recent years, organizations like the Government Communications Headquarters, (GCHQ), the Ministry of Defence (MoD) and other arms companies like BAE Systems have allied themselves with progressive causes, championing social justice issues from feminism to LGBT rights.

Ironically, the rise of “woke” politics has been a blessing for these organizations: the perfect guise of progressivism to mask the dark underbelly of British “defence” policy.

The tweet commemorated Turing not just as the war hero who cracked the Enigma code, but as an “LGBT icon” and “inspiration to those who dare to think differently.”

But wasn’t this very same LGBT icon hounded by the secret services for his sexuality?

GCHQ excitedly invites new recruits to come and walk in Turing’s footsteps — forgetting, it seems, that such footsteps include being convicted by the Establishment for his sexuality, accused of “gross indecency,” being chemically castrated and later committing suicide.

Not only did GCHQ treat Turing horrifically, it banned LGBT individuals from joining the agency until the 1990s.

Yet apparently GCHQ is now a beacon for LGBT rights. In 2015, the spy agency’s building was lit up with rainbow colours to celebrate IDAHOBiT (International Day Against Homophobia, Transphobia and Biphobia) and to “show the U.K. that GCHQ is a place that values diversity.” 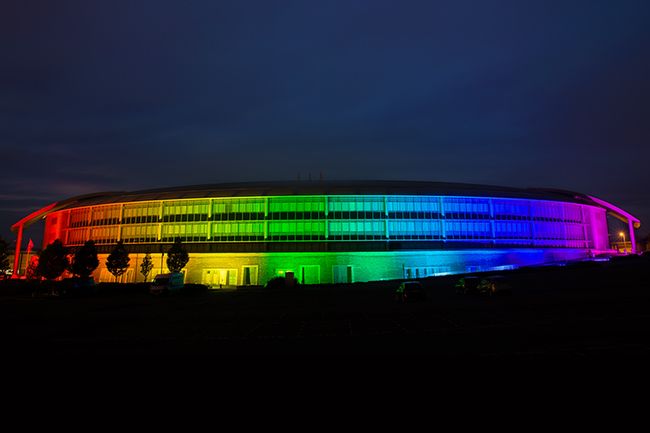 GCHQ illuminated its building with the colors of the rainbow for IDAHOBiT day in 2015. (GCHQ)

Last year it went even further, unveiling a mural of Turing — a huge, 3D, 10m-by-10m rainbow-colored art piece inspired by the LGBT flag — at the center of its headquarters.

The agency has also sponsored the LGBT awards, along with MI5 and MI6, delivered LGBT+ Awareness Courses and Trans and Non-Binary talks to hundreds of employees, introduced gender-neutral toilets and celebrated Asexual Awareness Week.

These might be laudable efforts in themselves, and perhaps GCHQ’s activism is honest atonement for past attitudes. That might just be believable if the agency wasn’t still closely aligned with countries in which “daring to think differently” could get you executed. 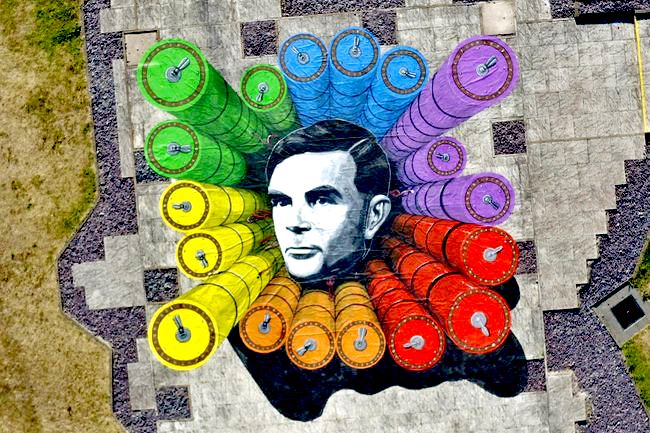 Artwork celebrating Alan Turing in the middle of GCHQ’s Cheltenham headquarters in 2021. (GCHQ)

GCHQ has three spy bases in Oman, for example, where homosexuality is illegal, and a security pact with Qatar, a country in which homosexual acts are punishable by imprisonment, public whippings, and even the death penalty under sharia law.

Just how big would a mural need to be in order to compensate for that?

“Defence is at its best when it is diverse,” declares the Ministry of Defence, which runs the British armed forces. The architect of unlawful wars in Libya and Iraq believes diversity is the “right thing to do from a moral perspective” and wants to be “recognised as a force for inclusion.”

Last year, for example, the MoD released a document setting out politically correct language for its personnel.

The paper reminded staff to announce their gender pronouns at meetings, and that “not all women are biologically female,” warning that referring to women as “females” reduced them to their “reproductive parts.”

Despite being deeply offended by sexist, old-fashioned terms, the MoD doesn’t seem to mind cozying up to Saudi Arabia, one of the most archaic and misogynistic regimes in the world.

The MoD is providing arms, training and advice to Riyadh’s military campaign in Yemen, which is so lethal it has left women to give birth in caves to hide from the bombs.

Tragically, women and children account for some 33 percent of the direct casualties in Yemen, despite not being combatants, and make up 76 percent of the millions of displaced persons. 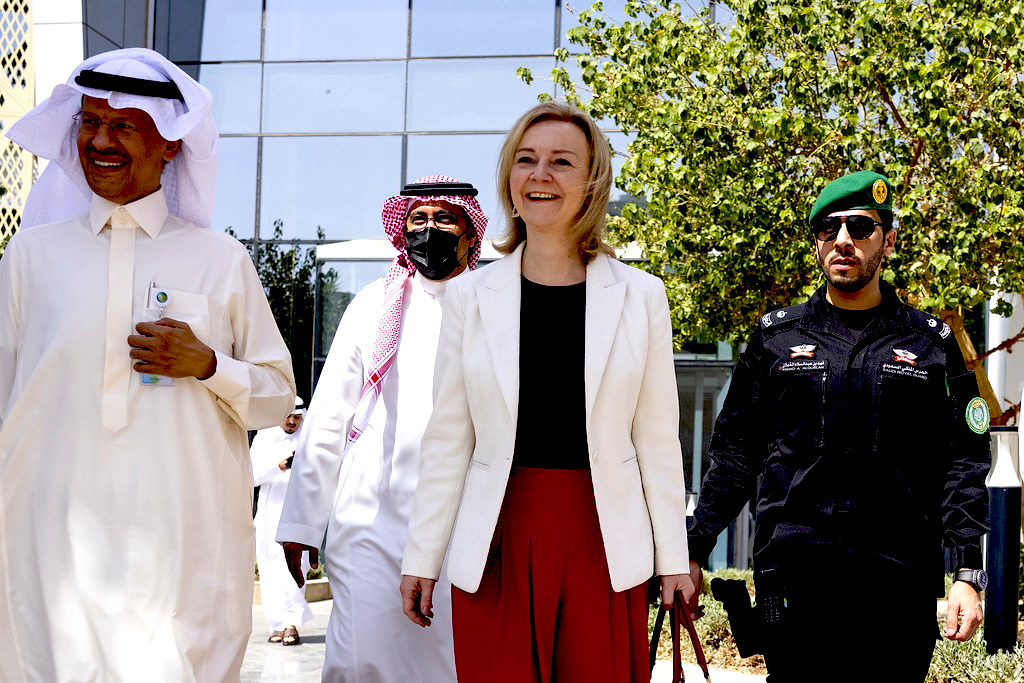 Its feminism may be a little flimsy, but the MoD still claims to be a moral voice for LGBT rights. To honor “#TransDayofRemembrance” last year, for example, it flew the trans flag on its building, tweeting: “To our Trans, Non-Binary and Intersex colleagues on #TransDayOfVisibility: We see you. We hear you. We celebrate you.”

But does it see, hear or celebrate the LGBT communities persecuted in the oppressive regimes it props up? Apparently not.

“A safe environment for all LGBT+ people is not only welcomed, it’s vital,” the MoD declared in July 2020, just over a week after resuming arms sales to a regime which has publicly beheaded gay people.

In fact, the MoD loans personnel to various militaries across the world including Oman, Kuwait and Brunei, which persecute homosexuality.

In Brunei, acts of homosexuality are punishable by public whippings and even stoning to death. Strangely, though, none of this stops the sultan of Brunei from being “a great friend” to our “gay-friendly” government. 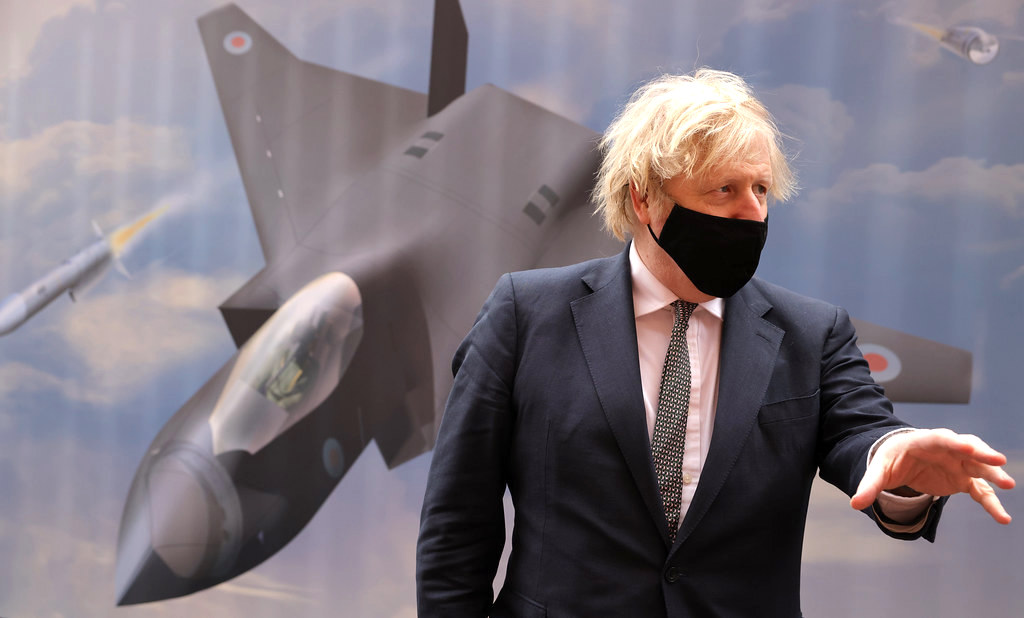 “Love Conquers Hate,” claims BAE Systems, Britain’s largest arms manufacturer. Who better to choose as a lead sponsor of Pride Month than BAE, a company whose biggest market is Saudi Arabia, one of the world’s most viscerally homophobic regimes?

Since Riyadh began bombing Yemen in 2015, BAE has sold weaponry worth £17.6 billion to the Saudi military.

Somehow, the company is both a “Stonewall Diversity Champion” and a major supplier to a regime in which homosexuality is punishable by public whippings, beatings, torture, chemical castrations, life imprisonment and vigilante executions.

But at least the team supplying the bombs is diverse. Feminists at heart, BAE aims to “inspire the next generation of female engineers,” pledging for women to make up more than 30 percent of its workforce by 2030.

Again, it is difficult to reconcile BAE’s celebration of women with its development of weapons that obliterate mothers, wives and daughters.

But the weapons giant doesn’t seem to see an issue. In fact, BAE sees itself not just as an inspiration for women, but for an entire “generation of young people.”

As well as other arms companies like Lockheed Martin — the supplier of a bomb that killed 40 children on a school bus in Yemen — BAE is touring U.K. schools, providing careers advice and workshops for kids as young as 9.

BAE’s top priority is the future of the next generation, we’re told, with the small exception of those 85,000 children under the age of 5 who have died from starvation and other diseases as a result of the Yemen conflict. 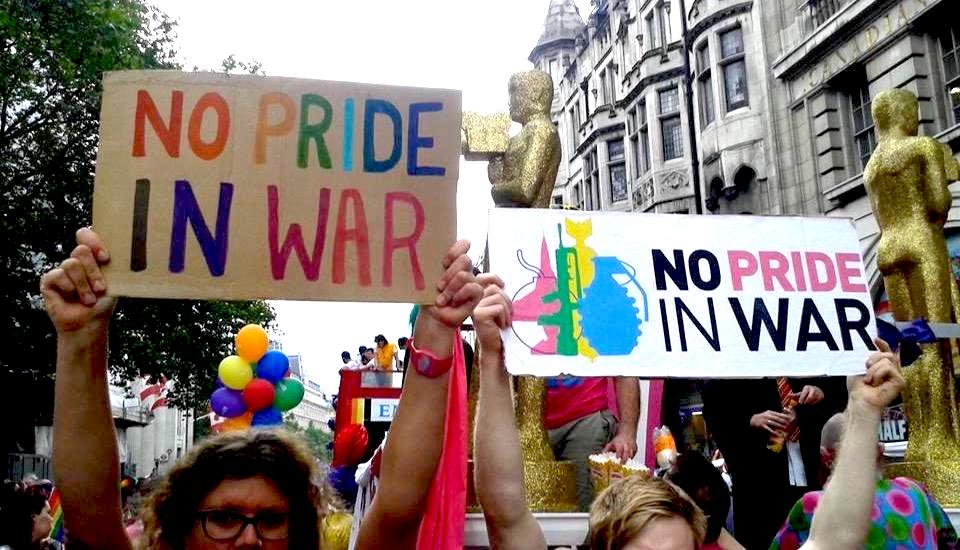 The U.K.’s Foreign Office has recently announced it is to host the “first global LGBT conference” in June.

The event, “Safe To Be Me,” “will be the largest event of its kind and will focus on making progress on legislative reform, tackling violence and discrimination, and ensuring equal access to public services for LGBT people”, the government says.

This is the same foreign office that is practically joined at the hip with the Saudis and which has close alliances with various other regimes attacking LGBT rights.

This superficial activism is nauseating enough from multinational corporations, but it is obscene from government agencies backing dictatorships, spy agencies and the armaments industry.

Forget about the deceit, dodgy deals and human rights violations, what counts is that GCHQ is “hiring spies on the autistic spectrum” and that the British military is making vegan pancakes.

These “defence” corporations may claim good intentions, but considering the flow of arms continues and war crimes rage on suggests this isn’t part of an authentic progressive shift.

Their ethics are hollow: while boasting values of “transparency” and “integrity,” these organizations continue to be intimately involved with sinister regimes and profit off of rising civilian deaths.

The reality is, the collision of social media and “woke” politics has been all too convenient for the military establishment. It is the perfect PR tool: mercenary motives can now be concealed beneath a veneer of rainbow flags, family-friendly sponsorships and social justice platitudes.

Military tycoons can now appear socially conscious without changing from within, effortlessly earn praise from the mainstream media and stifle public scrutiny, all without sacrificing profit or self-interest.

Not only are these organizations deceiving the public, they are exploiting the struggles of marginalized people to do so, while remaining complicit in savaging the same communities abroad and propping up some of the most repressive regimes in history.

For that there is simply no defence, no matter how large the murals or extravagant the flags.

Freya India is an independent writer based in England. She has written for various publications with a focus on politics, psychology and cultural issues.