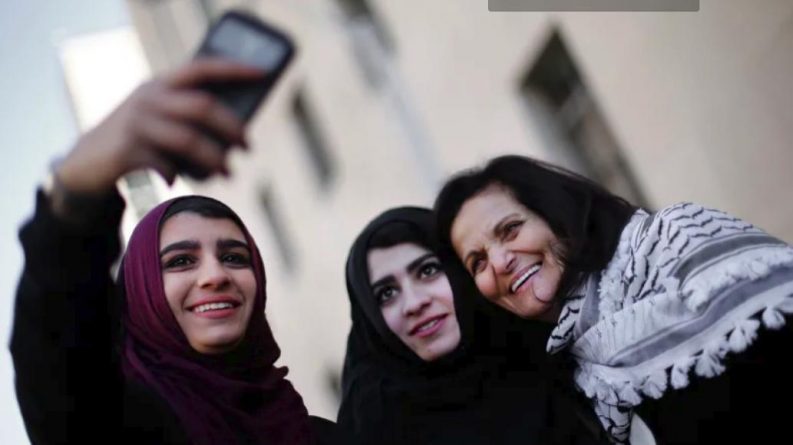 Palestinian activist Rasmea Odeh was banned from speaking at a public meeting marking International Women’s Day in Berlin on Friday after German officials revoked her visa.

The event was titled “Palestinian Women in the Liberation Struggle.”

The Israeli government claimed credit for the action.

According to the newspaper Haaretz, strategic affairs minister Gilad Erdan issued a statement saying the German decision came after pressure applied by him and “a slew of Jewish organizations in Germany, as well as protest by the Israeli ambassador in Germany.”

RELATED CONTENT: A ‘Private Mossad’ on Campus Yet No One is Alarmed

Officers surrounded the 72-year old as she arrived outside the venue and ushered her away from supporters protesting the decision. She was handed a document from the Berlin Senate and told to vacate the area.

The 26-page report claimed her appearance could endanger Germany’s relationship with Israel and threaten peaceful coexistence. It also referred to BDS Berlin, the event co-host, as an “anti-Semitic coalition.”

Odeh was scheduled to speak alongside Palestinian poet Dareen Tatour, who was imprisoned in Israel last year for posting a poem on social media, when Berlin city officials forced the Dersim Cultural Community Center to cancel the talk.

Odeh decided to speak outside the venue to an audience of over 100 but police cornered her on arrival, following her until she boarded a bus out of the area.

Last night in Berlin: The attack on Rasmea Odeh is an attack on Palestine https://t.co/MRnJCM4chB via SamidounPP pic.twitter.com/FSGXZ2qc6X

Torture
In 1969, Odeh was arrested, raped and tortured by Israeli soldiers. Twenty five days later she signed a confession for alleged involvement in two bomb attacks in Jerusalem, one of which killed two civilians.

She was released from Israeli prison a decade later in a prisoner exchange.

Odeh testified about the torture at a United Nations special committee and has been an outspoken proponent of Palestinian rights ever since.

In 2017, Odeh was deported from the United States to Jordan following a conviction for immigration fraud. The charges stemmed from her failure to disclose her 1969 conviction by an Israeli military court based on the confession that followed her torture.

From the time of her indictment in 2013, through her trial, Odeh, who had been a long-time community organizer in Chicago, became a focus of solidarity.

Smear campaign
Despite the evidence, media outlets continue to refer to Odeh as a “terrorist,” often failing to mention the torture conditions under which her confession was made, or the 1977 Sunday Times investigative piece which brought her story to light.

The smear campaign against Odeh began as soon as she arrived in the German capital.

The newspaper Der Tagesspiegel published a total of four articles where it accused Odeh of spreading hatred towards Jews, compared her to Islamist hate preachers, and referred to BDS – the boycott, divestment and sanctions movement for Palestinian rights – as anti-Semitic. The Berlin Senate’s report cites the newspaper’s article in its reasoning.

US ambassador Richard Grenell and Israeli ambassador Jeremy Issacharoff threw their political weight behind the campaign to ban Odeh, while Berlin mayor Michael Mueller, who was once threatened by the Simon Wiesenthal Center that he would be placed on its annual anti-Semitism list, condemned the planned talk as “extremist propaganda.”

Representatives across the political spectrum also weighed in. The Green Party’s Volker Beck, a long-time supporter of Israel, was among the pro-Israel protesters outside the community center on Friday whilst the center-right deputy leader in the Berlin Senate, Cornelia Seibeld, called Odeh an anti-Semite.

Berlin’s interior minister and center-left official Andreas Geisel conflated criticism of Israel with anti-Semitism in his remarks to the media.

The incident marks another moment in the growing hostility toward supporters of Palestinian rights in Germany.

Three activists were recently taken to court for disrupting an Israeli political representative at a 2016 pinkwashing event.

Pinkwashing is the public relations strategy that deploys Israel’s supposed enlightenment toward LGBTQ issues to deflect criticism from its human rights abuses and appeal particularly to Western liberal audiences.

The activists were charged with trespassing and assault.

Local and federal bodies across Germany continue to pass measures that equate BDS activism for Palestinian liberation with anti-Semitism.

Charlotte Kates, an organizer with political prisoner solidarity group Samidoun in Berlin, said the incident was “an attack on Rasmea’s right to speak and the right of people in Europe hear her.”

“What she has to say presents progressive ideas and political thought that challenges Israeli apartheid, racism, colonialism and occupation.”