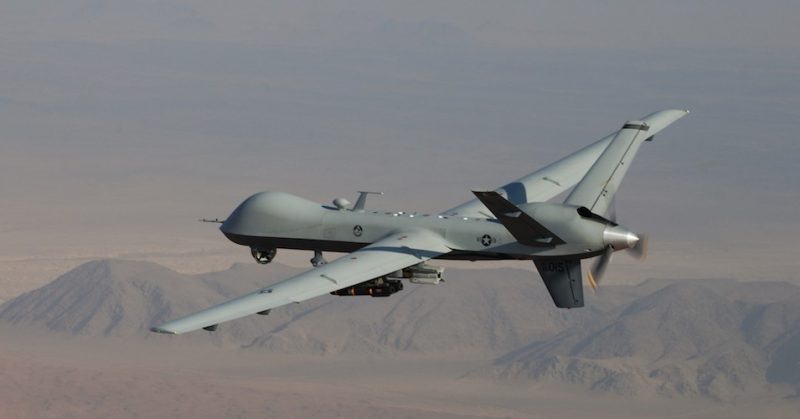 “The attacks appear to have violated international humanitarian law.”

19/Mar/2019.- A human rights group is accusing the United States of waging a shadow air war in Somalia that is killing civilians with abandon.

Amnesty International issued its findings on the African war Tuesday evening in a report titled The Hidden US War in Somalia (pdf).

The U.S. has been covertly engaging in conflicts in Somalia for decades, but in April 2017, the Donald Trump administration upped airstrikes and attacks targeted at the rebel group Al-Shabaab.

The human rights advocacy group studied five of more than 100 strikes on Somalia over the past two years and found that 14 civilians were killed in the attacks. Eight others were injured, the report says.

“These five incidents were carried out with Reaper drones and manned aircraft in Lower Shabelle,” Amnesty said in a press release, “a region largely under Al-Shabaab control outside the Somali capital Mogadishu.”

The U.S. military denied to Amnesty that any civilians have been killed as a result of American operations in Somalia.

However, Amnesty’s report claims its methodology is sound and that the evidence is overwhelming.

“The attacks appear to have violated international humanitarian law,” the organization said, “and some may amount to war crimes.”

In comments provided to the media, Brian Castner, the group’s senior crisis advisor on arms and military operations, claimed that the continued airstrikes are also a sign of the Trump administration’s aggressive use of military action across the world.

“The civilian death toll we’ve uncovered in just a handful of strikes suggests the shroud of secrecy surrounding the US role in Somalia’s war is actually a smokescreen for impunity,” Castner said.

Amnesty is calling for an official government investigation into the killings and airstrikes and urging people to add their name to a petition to Congress to force action. Ella Knight, an Amnesty researcher concentrating on military, security and police, said that pushing for oversight is key.

“The U.S. government must ensure investigations into all credible allegations of civilian casualties are carried out with accountability for those responsible for violations and reparation made to the victims and survivors,” said Knight.

The mission doesn’t end with U.S. and Somali accountability, Knight added. She argued it’s the responsibility of both governments to make it easier and safer for communities affected by the war to publicly acknowledge civilian casualties.

“Both the US and Somali governments need to put an end the lack of transparency and must do more to enable affected communities to self-report civilian casualties,” Knight said. “Without this, justice is likely to remain elusive.”