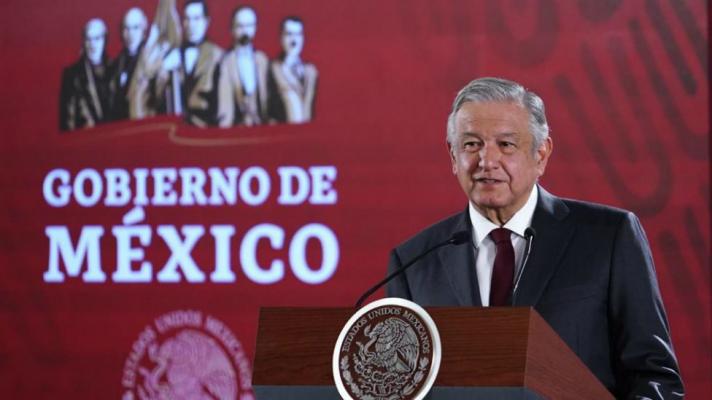 It has been already stated on many occasions that it is enough for a country to show autonomy or not fully bend to the designs of the United States for it to swell the ranks of its list of enemies and for its defects to begin to emerge in the eyes of the US. And once it is under the spotlight, imperialism uses all available resources to attack its new objective.

Such is now the case of Mexico and its president Andrés Manuel López Obrador (AMLO), who, in the context of the upcoming mega-elections that will take place on Sunday, June 6, has become the target of the powerful propaganda apparatus of the empire together with other organizations that have been used as Trojan horses.

That is why it is not by chance that AMLO has recently occupied a prominent place on the cover of the May 29-June 4 edition of the British weekly The Economist, which has called on Mexican voters to vote for anyone except for the political party of the current president.

On the other hand, the usual American method of financing the opposition through organizations such as the National Endowment for Democracy (NED) and the United States Agency for International Development (USAID), the Trojan horses that were mentioned earlier, has also returned. But let us address these two fronts separately.

The Economist as Propaganda Apparatus of the Empire
Anyone would wonder what a historic and prestigious media outlet in England has to do with a domestic process in Mexico, considering the way The Economist pretends to care about Mexican democracy. However, an article by Nick Corbishley entitled ”The Empire Strikes Back Mexican President AMLO” claims that The Economist is not just any British newspaper, but that it has a wide reach worldwide due to its more than one million subscribers in North America and Great Britain and several hundred thousand more in the rest of the world.

According to Corbishley, ”Its [The Economist’s] readership has always comprised the crème de le crème of the financial and business elite. Within a decade of its founding, in 1843, Karl Marx described it as the organ of ‘the aristocracy of finance.’ Not much has changed since then. As the New Yorker wrote in 2019, since the early nineties The Economist has served, alongside the Financial Times, as ‘the suavely British-accented voice of globalization.’”

The sudden interest in Mexican democracy is undoubtedly marked by the interests of this global financial elite that seeks to replace pieces of its geopolitical chessboard with other, more manageable ones.

The characterization of the ”false messiah of Mexico” and that of ”authoritarian populism” but ”with nuances” tries to associate AMLO with other presidents in order to tarnish his image, adducing that The Economist ”intends to advise Mexicans on how to vote in Sunday’s elections.” The attitude of the Mexican president can hardly be compared with that of Jair Bolsonaro, another of those leaders who have been described as authoritarian populists.

And, although The Economist says in favor of AMLO that he does not attack homosexuals, supports other just causes and raises his voice in favor of the dispossessed of his country, in addition to not being ”personally corrupt,” the British publication does point out that AMLO is a ”danger to Mexican democracy” and adopts an obviously interventionist stance when it urges that ”the voters of each locality should support the opposition party that is best placed to win.”

AMLO reflected on this and responded to The Economist’s article by stating that ”these foreign magazines and newspapers were dedicated to applauding the neoliberal policies [of past governments]; they are in favor of privatization, and they have always kept silent in the face of the corruption that reigned [in Mexico]… their attitude is like if I were to go to the Kingdom United and ask the British people to vote for my friend [Jeremy] Corbyn of Labor Party. I cannot do that because that is a decision of the British people. So, why don’t they respect us too?”

NED and USAID as Arms of Intervention
It has become an inexorable law that the presence of US agencies in any country is proportional to the degree of intervention they want to carry out. It is enough to know how this form of unarmed intervention operates to understand this logic.

The dynamic is more or less the following: the moment an autonomous government independent of imperial influence wins power in a country, the altruism of organizations such as USAID and NED, among others, is immediately awakened. These organizations begin to ”worry” about the situation of human rights and democracy of said country; NGOs begin to proliferate and then the flow of resources to the opposition begins so as to ”strengthen the democratic institutions.”

This form of interventionism is already becoming evident against López Obrador. Corbishley cites reports from investigative magazine Contralínea which prove that the United States government is financing political opposition groups in Mexico.

According to Contralínea, both USAID and NED have been financing the organization Mexicans against Corruption and Impunity (MCCI), founded by Claudio X. González Jr., son of the former president of the Kimberley Clark Mexico branch. MCCI claims that it investigates political corruption, but the Mexican government alleges that it is a political organization also, since it is not dedicated to the investigative field only.

Corbishley mentions that ”González Jr has publicly spearheaded the charge against MORENA in this year’s election by organizing the coalition of parties arrayed against it and funding candidates. He has also played a prominent role in efforts to block key pieces of AMLO’s legislative agenda in the courts.”

Such interference was described by President AMLO as an act of interventionism that violates Mexican sovereignty and therefore, he has sent a diplomatic note to the United States to clarify the matter, while reiterating that the Constitution of Mexico prohibits such activities. ”You cannot receive money from another country for political purposes,” AMLO declared.

The concern is not illogical if one takes into account the role that US agencies have played in organizing coups throughout Latin America. The most recent examples of financing opposition, NGOs and coup attempts that aim to rearrange the board in favor of the US are those that occurred in Nicaragua, Venezuela, and Brazil, but in reality this history is older and covers the entire hemisphere.

Considering these two sides of the same coin, it is worth noting that the media narrative coming from the outside, on the one hand, and the interventionist arm of the US agencies from the inside, on the other, together constitute an imperial maneuver with respect to next Sunday’s elections that AMLO has to face.

Why is AMLO the enemy to defeat?
Although Mexico does not have a radical position like Cuba, Venezuela or Nicaragua (according to imperial logic, to be radical is to stand up to interventionism and not be submissive), the fact that that the its president is trying to direct a more independent course for his country in the field economic policy, as well as foreign policy, already represents a threat to the economic and geopolitical interests of its neighbor the United States, which is also its largest trading partner which buys around 80% of its exports.

The commercial relations between these two northern giants have not been interrupted, but the fact that AMLO is taking independent decisions has made the neighbor uncomfortable, especially because he has not been the usual complacent ally who automatically raises his hand in support of any imperial decision that harms another country in the region.

That the United States wants to influence the Mexican elections is a way of rescuing a natural ally. But it is also a way to prevent an autonomous state from continuing to consolidate, with another logic, for it is important to remember that López Obrador is a kind of outsider who burst onto the scene of wasteland of the PRI-PAN bipartisanship, and because of the impossibility of massive fraud as was used in other occasions.

Assuming the figure of the outsider ever since he came to power, AMLO has tried to disrupt the deep structure of the Mexican State. Therefore, the elections of June 6 represent the continuity of that pulsation between what has not been fully installed and what has not completely left power.

According to the latest polls, MORENA, the umbrella movement led by AMLO, is likely to win both the congress and the senate with comfortable margins. However, it is unlikely to secure an absolute majority, which means it will still have to depend on other parties to pass new laws. And that is about the best result that the financial and business elite, both inside and outside Mexico, could hope for.

”If MORENA won an absolute majority in both legislative chambers,” opines Corbishley, ”AMLO would be able to sign into law just about any bill. The opposition parties are exceptionally weak right now, largely because they have done such a bad job of governing in the past.”

On the downside for AMLO administration, the disastrous handling of the pandemic at first, hesitation in the face of some privatizations, inactivity regarding indigenous rights, insensitivity to protests around the plague of feminicides, excessive cuts in some areas, continued incidents of violence despite the creation of the National Guard are some things that the government has done wrong, according to Kurt Hackbath’s report for Jacobin Magazine.

However, these critiques are not enough to overshadow López Obrador’s unprecedented achievements so far during his administration. The following are some of them:

AMLO has also approved a presidential decree that eliminates the use of the herbicide glyphosate, the active ingredient in Monsanto’s Round-up, and prohibits the cultivation and importation of genetically modified corn.

As for international policy, AMLO has remained respectful and has not intervened in internal matters of other countries, something that represents a leverage on imperial interests. An obvious case is not recognizing Juan Guaidó, as well as having called Evo Morales’ departure a coup and rescuing him on a plane from Bolivia that was engulfed in the violent coup of 2019. Both these instances have constituted a direct challenge to the servile Organization of American States (OAS).

Whatever has been described in this note serves to outline the reasons why the elections of next Sunday, June 6, has entered the imperial agenda. That is why The Economist not only calls for a vote in favor of the opposition, but it has also called on the US government to ”pay attention” to what is happening in [its backyard] Mexico.

If the United States were really interested in battling corruption in Mexico, it would have started with the governments that preceded AMLO, which have been historically recognized for their unscrupulous management of the Mexican state and economy. According to the US manual, an ideal government is one that is useful to its interests. For this reason, AMLO’s administration enters in its radar signal of enemy governments.