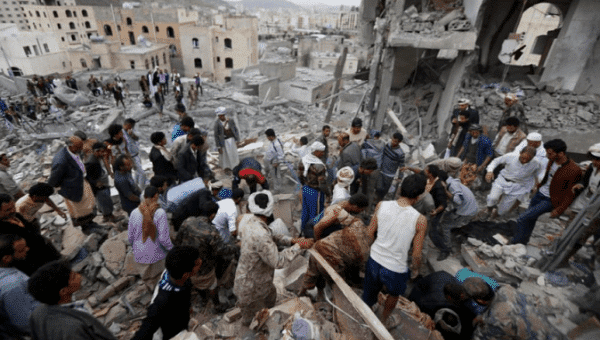 The UN agency has categorized the situation in Yemen as the world’s current worst humanitarian crisis.

At the four year anniversary of the Saudi war on Yemen as many as 56,000 Yemeni, mainly civilians, have been killed in the conflict fueled by arms from the United Kingdom, United States and France.

RELATED CONTENT: At Least 10 Children Die From US Bombing in Afghanistan

The United Nations has categorized the situation in Yemen as the world’s current worst humanitarian crisis.

In what factions thought would be a six month conflict has instead dragged on for four years that, according to the British-based Armed Conflict Location and Event Data Project (ACLED), has left some 56,000 dead, and another 60,000 injured.

Dubbed as the “Forgotten War,” the Yemeni civil war started on March 26, 2015, when Saudi Arabia and the United Arab Emirates led a coalition of countries in a military campaign against Ansar Allah (Houthi) rebels in Yemen in support of the Saudi-backed government of Abd-Rabu Mansour Hadi.

After 4 years of war, Yemen is the largest humanitarian crisis in the world. 80% of the population is in need of humanitarian assistance, including more than 11m children. Last year, I saw @UNICEF_Yemen‘s work on the ground to protect #ChildrenUnderAttack. pic.twitter.com/9zQEf2eYbM

Unicef Chief Henrietta Fore said in a tweet: “The reality in Yemen is very serious and makes it impossible for the population to access the most basic services to feed themselves, avoid diseases or protect the most vulnerable.” She added that “80 percent of the population is in need of humanitarian aid,” including more than 11 million children.

Another UN officials now say that there are 100,000 possible cases of cholera were recorded this year alone Some 2,500 people have died from cholera since 2017.

In addition, more than one million pregnant women suffer from malnutrition and 55 percent of people can not access water.

A British parliamentary committee concluded last month that the country has exported some US$6 billion in arms to Saudi Arabia which used the weapons on Yemeni civilians in the war, causing “significant civilian casualties.” The arrangement likely violates international humanitarian law, said the lawmakers.

Several non-governmental organizations (NGOs) have activated the “accountant of shame” in order to remember what is behind the war in Yemen and its consequences.

For its part, the UN warned that every ten minutes a child dies in the impoverished and now war-torn country from malnutrition, diarrhea or respiratory infections. About two million children don’t have access to regular education.