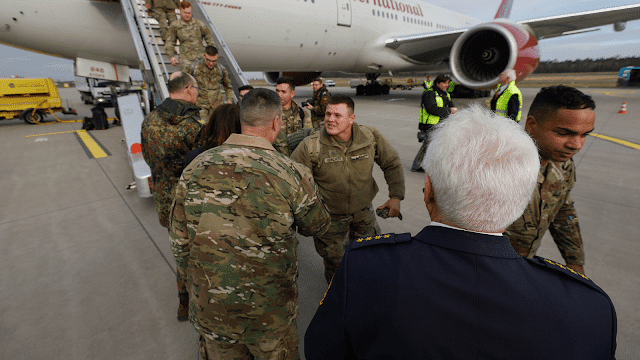 In the midst of a staggering virus epidemic that has shut much of Europe down, the insane and arrogant United States is presently sending 30,000 Army troops throughout Europe for war games.

As the soldiers emerged from their transport planes they shook the hands of US and European military officials welcoming them to the hotbed of corona-virus.

Exercise DEFENDER-Europe 20 is the deployment of a division-size combat-credible force from the United States to Europe, the drawing of equipment and the movement of personnel and equipment across the theater to various training areas. It is the largest deployment of U.S.-based forces to Europe for an exercise in the more than 25 years.

U.S.-based equipment will leave from ports in four states and arrive in six European countries. This will require the support of tens of thousands of service members and civilians in multiple nations.

U.S. service members will then spread out across the region to establish intermediate staging bases with multinational forces and participate in various annual exercises.

Ostensibly this massive war game is to ‘protect’ the people of Europe from the exaggerated ‘threat’ from an attack by Russia. Of course, that is total nonsense. The US-NATO are in fact threatening Russia and when these wars games are over much of the military hardware delivered there will be left in large new ‘storage depot’ bases located in Poland and other locations near Russian borders.

Of course, the US will likely be ‘leaving’ and ‘spreading’ something much more dangerous during these exercises. There is no way in hell that during this current pandemic many of these troops won’t become ‘carriers’ of the virus. What message is being sent to the people of Italy, Germany or France that they should lock themselves inside their homes while US troops play war throughout Europe?

Peace groups in Europe are now demanding that these provocative war games be canceled but so far the US military is ignoring these legitimate concerns.

And what happens when these likely ‘contaminated’ troops return to the US – to be fanned out across this nation – bringing home the contagion that they carry inside their bursting patriotic chests which now are loaded with the virus?

When will the world begin to realize that the USA is not here to help you?