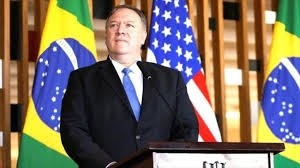 The US Secretary of State urged the Latin American countries to act against the Venezuelan Government and to stop the Chinese influence in the region.

“We want to be sure that not only the United States and Brazil, but the other countries of the region leave very, very clear (…) that democracy has to be restored” in Venezuela, said Mike Pompeo in a telephone interview granted to the Brazilian newspaper O Estado de Sao Paulo, made public this Sunday.

The US Secretary of State also asserted that “the regime of (President of Venezuela Nicolás) Maduro claims to occupy Venezuela during another term and we do not consider that the elections (May 2018) were fair, because they were a farce.”

In another part of his interview, Pompeo addressed the commercial presence of China in the Latin American region, stressing that “it is unquestionable that China can not be allow to develop a predatory economic activity.” Pompeo exhorted that Beijing “can not be given permission to appear in countries with practices that are not open, “so that it acquires” political benefits using commercial factors “.

The Venezuelan government has categorically rejected “the interventionist attitude” of Pompeo, who on his trip to Brazil and Colombia called for “the need to increase pressure” against Maduro.

In this regard, the Venezuelan Chancellor, Jorge Arreaza, denounced on Saturday the collusion between Pompeo and the so-called Group of Lima, which announced that it will not recognize as legitimate the new term of President Madura scheduled to start this January the 10th.

“Mike Pompeo, true boss of the Cartel (group) of Lima, has come out to congratulate his subordinates counterparts, for complying with submission and humiliating discipline the interventionist orders he dictated yesterday by videoconference, to encourage a coup d’etat in Venezuela.” Arreaza said.