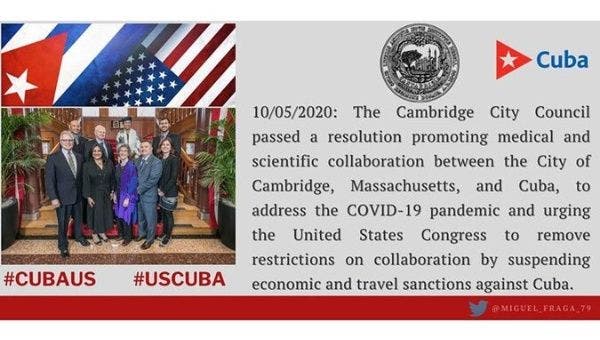 October 6, 2020.-  The U.S. city of Cambridge, Massachusetts, approved a policy order Monday night to explore medical exchange and collaboration with Cuba to jointly confront the COVID-19 pandemic that has impacted the entire world.

The order, sponsored by Councilmembers Dennis Carlone, Marc McGovern and Quinton Zondervan, as well as Cambridge Mayor Sumbul Siddiqui, highlights that the city of Cambridge is home to some of the most prestigious institutions in the United States, and highlights Cuba’s development of an internationally respected biopharmaceutical industry.

The island, the document adds, uses several successful treatment protocols to control COVID-19, among them medicines produced in Cuba such as Biomodulin T and Interferon Alpha 2B human recombinant, “which has given that country an extremely favorable mortality and recovery rate.” The text regrets that none of these drugs are available in the United States due to the continuous and growing restrictions on collaboration with and imports from the Caribbean nation.

The city of Cambridge and its institutions, including Harvard University, Massachusetts Institute of Technology and Cambridge Hospital, have a long history of direct medical and scientific exchanges of professors and students, as well as direct collaboration with Cuba, the policy order points out.

In addition, it highlights that there are other efforts in the United States that seek medical collaboration with the Antillean nation, as shown by resolutions recently passed in Cleveland, Ohio, and in Richmond and San Francisco, California, which also demand the lifting of the nearly 60-year-old blockade against the island.

#Cambridge City, MA, on its way to vote a Policy Order
calling on the Congress and President of the US to lift restrictions on access to Cuban medical and biopharmaceutical expertise and suspend relevant US economic and travel sanctions against #Cuba. https://t.co/PlFEWXqVvW

The people of Cambridge, the rest of the country and the world would benefit from biopharmaceutical, medical and public health collaboration and exchange between the United States and Cuba, the document states.

For this reason, it orders the city to actively explore collaboration to jointly face the current pandemic, which would include restarting the transfer of knowledge on public health prevention methods, ways to prevent infection of health personnel, and development of new treatments, vaccines and protocols.

It also states that the Council should actively encourage the Massachusetts State Legislature and Governor Charlie Baker to pursue such exchanges, knowledge transfers and collaboration.

Similarly, the city calls on Congress and the President of the United States to lift restrictions on access to Cuba’s medical services and biopharmaceutical expertise by suspending all economic and travel sanctions against the island.