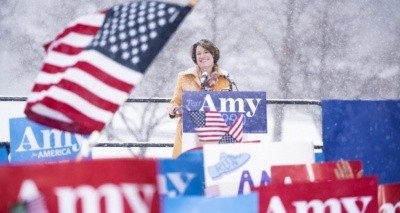 Senator and Democratic presidential hopeful Amy Klobuchar reiterated her support for the lifting of the economic, commercial and financial blockade of almost 60 years that the United States maintains against Cuba. In statements to Prensa Latina, the congresswoman from Minnesota recalled that she has spearheaded the introduction of bills in the US Congress to end that policy, which she described as unsuccessful.

RELATED CONTENT: Alba-TCP Expresses its Support to President Maduro and the People of Venezuela

I led the project to lift the embargo (blockade) and I still believe that this is what we must do, more than 50 years of failed policy do not have to mean another 50 years of that same policy, said one of the contenders of the Democratic camp composed of more than 20 presidential candidates. “We must put an end to the embargo while ensuring that we maintain our commitment to human rights”, added Klobuchar, who said she will never forget the trips she has made to the Caribbean island, where she said she had seen a people interested in working with the US.

Also, the senator said she disagreed with the measures adopted against the island by the administration of Republican President Donald Trump, which reversed the bilateral approach begun in late 2014 under the Government of Barack Obama (2009-2017). The current occupant of the White House adopted a path of open hostility towards the Caribbean nation, which has resulted in a resurgence of the blockade with moves such as the recent activation of Title III of the controversial Helms-Burton Act, and the announcement of further restrictions to travel and sending remittances.

Kobuchar, along with her colleagues Patrick Leahy (Democrat) and Mike Enzi (Republican), presented last February the project of Freedom of Exports to Cuba, aimed at lifting the aforementioned embargo. “Instead of looking to the future, politics of the United States and Cuba has been defined for too long by the conflicts of the past,” said the legislator at that time. Cuba is an island of 11 million inhabitants, just 90 miles from our border, the senator added, who considered that the end of the blockade will open the doors to a large export market, create jobs and support the US and Cuban economies.

Klobuchar, along with other legislators, businessmen and representatives of various sectors, participated on Tuesday in a summit organized in the Congress by the United States-Cuba Business Council of the Chamber of Commerce. This appointment was seen as a sign that in the North American nation there is still interest in expanding ties with the neighboring country.