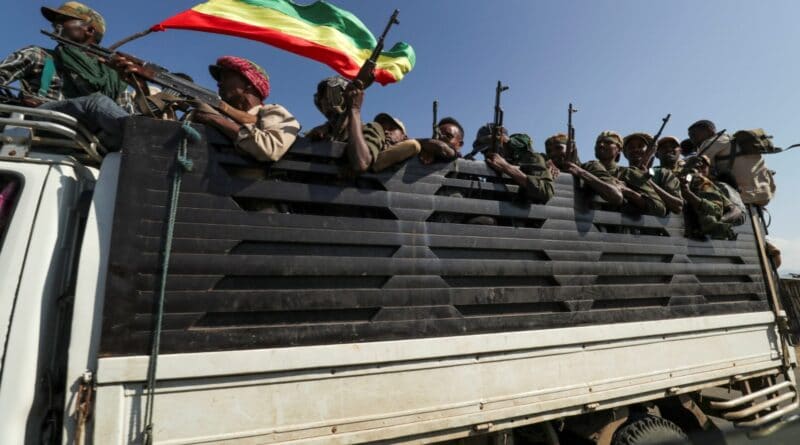 Video footage has emerged of several Western diplomats meeting with leaders of the Tigray People’s Liberation Front (TPLF), showing them frankly discussing plans to overthrow Ethiopia’s democratically-elected president, Abiy Ahmed. Abiy arrived at the front lines on Wednesday to take personal control over the effort to halt the TPLF’s offensive.

Top US, UK and European Union diplomats with longstanding connections to Ethiopia during its 27 years of TPLF rule met on Zoom on Sunday with a “chief representative” of the TPLF, trading ideas about the group’s potential to seize power and the Ethiopian National Defense Force’s (ENDF) ability to stop it.

The meeting comes as Western states continue to posture themselves as neutral in the conflict, and while the Biden administration puts heavy pressure on Abiy’s government, applying economic sanctions to Addis Ababa and its Eritrean allies for supposedly exacerbating it.

According to investigative journalist Jeff Pearce, the video was shot on a phone camera by an unnamed participant in the meeting and given to him. The source said the meeting was held under the auspices of the Peace and Development Center International, which they described as “TPLF and OLF-run masquerading as NGO,” referring to the TPLF-allied Oromo Liberation Front.

On the center’s website, it lists among its partners and donors the US Agency for International Development (USAID), which is part of the US State Department, and the National Endowment for Democracy (NED), a well-known and self-admitted CIA front, both of which have astroturfed opposition parties and funneled funds to pro-US groups from Hong Kong to Nicaragua and beyond.

Among those seen in the video are US Ambassador to Somalia Donald Yamamoto; Vicki Huddleston, former Chargé d’Affaires ad interim to Ethiopia; former US deputy assistant secretary of defense for African Affairs and US assistant secretary of state for Africa; and Berhane Gebre-christos, a longtime TPLF official who served as Ethiopia’s ambassador to the United States for 10 years after it came to power in 1992 until 2002 and was later Ethiopia’s ambassador to several European countries, the EU, and to China. Berhane was also foreign minister from 2010 until 2012. He was introduced in the meeting as a “chief representative of the TLF,” an older name for the TPLF.

Hope for TPLF ‘Military Success Fairly Soon’
During the two-hour meeting, Berhane sought to persuade the attending diplomats that there was wide support for the TPLF’s program and that Abiy’s intention from the very beginning of his 2018 election was to consolidate power around himself and use the Tigrayan people as a pariah with which to do it.

He also claimed that a number of foreign nations were selling Abiy’s government “sophisticated technologies, including Iran, Turkey and Azerbaijan,” along with “the traditional ones, Russia and China.”

“Abiy is not listening, he’s not listening at all right now,” Yamamoto, the US envoy to Mogadishu, asked Berkane. “And how are you going to reach him? A person who’s really in a corner. And [African Union envoy Olusegun] Obasanjo has not been extraordinarily helpful or very active, and so are there any other opportunities that you see?”

“I hope that you’ll have military success fairly soon, because it seems as if the situation is only becoming more drastic,” Huddleston told Berhane. “Abiy should step down, there should be an all-inclusive transition government.”

“Even if Abiy sticks to his guns, which unfortunately he seems to be doing, you either hope that people around him either in government or in the military realize that this is going nowhere and might force him to, well, accept the cessation of hostilities or force him to step down?” asked Gompertz, the retired French diplomat.

Two weeks ago, Berhane gave his answer to reporters during a trip to Washington, DC: “There is no limit for us … Definitely we will have a change in Ethiopia before Ethiopia implodes.”

“The next step will be to organize ourselves and totally dismantle the existing government, either by force or by negotiation … then insert a transitional government,” Mahamud Ugas Muhumed, of the Somali State Resistance, another TPLF-allied group from the eastern Somali region, said at the November 5 presser..

In other words, the diplomats’ Sunday discussions are in lock-step with the TPLF’s political program.

‘We’re Not Interested in Controlling Addis’
One particularly illuminating exchange happened between Berhane and Huddleston. The former Pentagon chief for Africa, while noting how well the TPLF has been fighting, said that it “probably would be a huge mistake” for the Tigrayans to seize control of the Ethiopian government outright.

“I assure you that we’re not interested in controlling Addis and so on,” Berhane replied.

Indeed, while the TPLF was the dominating force of the Ethiopian People’s Revolutionary Democratic Front (EPRDF), the government that replaced the Marxist Derg military government in 1992, its 27 years of rule saw a sizeable part of Ethiopian industry and military power moved from other parts of the country into the northern Tigray state. This was in accordance with the group’s manifesto drawn up in 1976, which rejected the notion that Tigrayans had any connection to other Ethiopians and called for creating a separate nation-state of “Greater Tigray.”

Simon Tesfamariam, executive director of the New Africa Institute, told Radio Sputnik’s By Any Means Necessary on Tuesday that in the manifesto, the TPLF said “their goal was to one day create this greater republic of Tigray, which would expand its territories to the sea, meaning compromising Eritrean sovereignty, and then also into the interior of Ethiopia, taking lands – ancestral lands – of other peoples.”

After the September 11, 2001, terrorist attacks against the World Trade Center in New York City and the Pentagon in Arlington, Virginia, by al-Qaeda*, the TPLF-led Ethiopian government became one of the US’ most important partners in the War on Terror. At its height, this included the 2006 invasion of Somalia to depose the Islamic Courts Union, the country’s first government in 15 years of civil war, which paved the way for the rise of al-Qaeda affiliate al-Shabaab.

Posturing for Peace?
Abiy was elected prime minister in 2018 after the TPLF chairman of the EPRDF, Hailemariam Desalegn, resigned amid massive nationwide protests. The coalition’s other member parties, each of which hailed from a different Ethiopian ethnic group, rejected further TPLF rule and chose Abiy, an Oromo, as their new candidate. He was reelected in July by a large majority.

Abiy took the country in a new direction, rejecting the federalized structure used by the TPLF to keep Ethiopia’s many ethnic groups separated and more easily controlled, and uniting their many parties into a single Prosperity Party. He also tried to withdraw ENDF forces from Tigray after signing a peace treaty with Eritrea. The TPLF rejected and resisted these moves, and in November 2020, tried to hold illegal elections in Tigray after Abiy’s government postponed the vote due to the COVID-19 pandemic. ENDF forces in Tigray came under attack on November 4, 2020, and the war was on, with Eritrea soon siding with Abiy’s government.

“On November 4 … they started to use the hashtag #TigrayGenocide. Before you could even tally up who was dead and where the bodies were, right off the bat they were using the #TigrayGenocide hashtag. And it became a campaign, the media started to say there was a genocide going on in Tigray,” Tesfemariam told Sputnik, noting that the UN Human Rights Office and Ethiopian Human Rights Commission found no evidence of such a genocide in Tigray, although it did document human rights abuses by all sides in the conflict.

During the first several months of the conflict, the US did not take particular note, but in May 2021, two weeks after the Ethiopian Council of Ministers declared the TPLF a terrorist organization, the US State Department imposed visa restrictions and restricted economic and security assistance to the country.

By September, after the TPLF launched a new offensive into the neighboring Afar and Amhara regions and Abiy declared a state of emergency, Biden issued an executive order authorizing more substantial measures, including sanctions on central Eritrean political and defense leaders for actions that “contributed to the crisis and conflict, which have undermined the stability and integrity of the Ethiopian state.”

The very deep irony is that Sunday’s secretive Zoom meeting planning the dissolution of Abiy’s government was just nine days after the US Treasury announced the sanctions against Asmara.

On Tuesday, Abiy said he was taking personal control over the fight from the front, as the TPLF was rumored to have captured the town of Debre Sina, 190 kilometers from Addis Ababa. Meanwhile, US special operations forces in Djibouti, which borders Ethiopia to the east, were put on standby in case they were needed to help Americans in the embassy in Addis Ababa, according to CNN.

*Al-Qaeda: a terrorist group banned in many nations