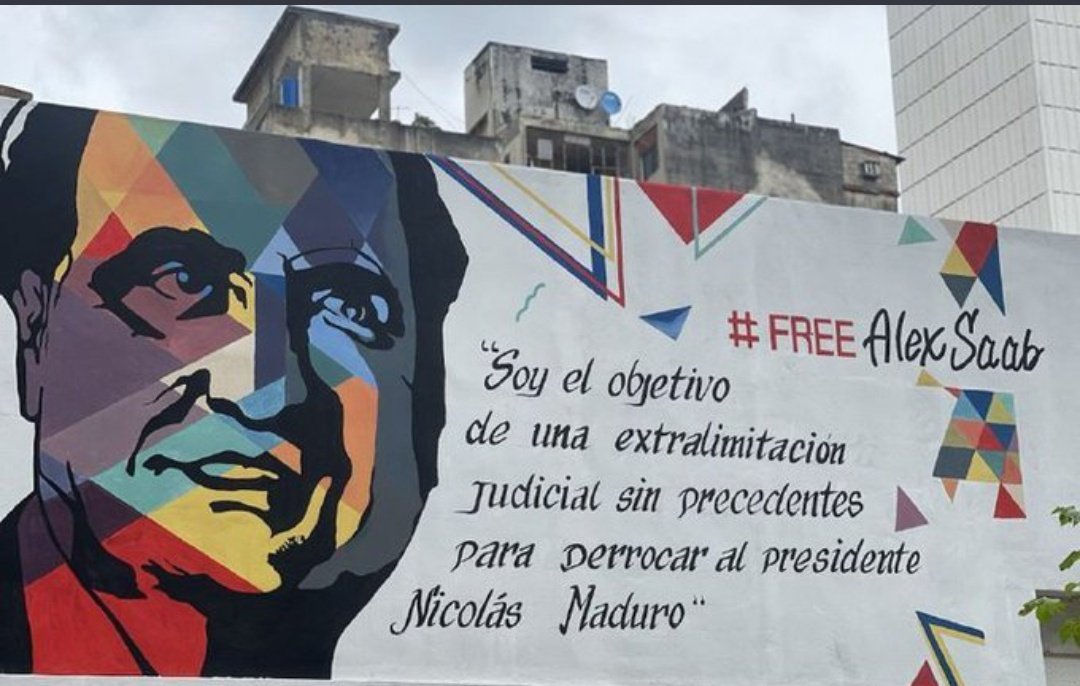 Featured image: Street mural in Caracas with the face of Alex Saab and the caption “I’m the object of an unprecedented legal persecution to oust President Nicolas Maduro.” File photo.

May 20 (Special for OrinocoTribune.com)—Venezuelan businessman and diplomatic envoy Alex Saab, held in Cape Verde and facing extradition to the US, is a victim of political persecution and his case is comparable to that of Julian Assange or Chelsea Manning. Saab, who had engaged in brokering deals that would evade the US economic blockade against Venezuela and bring fuel, food, and other needed materials to the South American country, was detained in the African island nation of Cape Verde last June.

Over the course of the past year, Saab’s case has made waves on the African continent and in Venezuela, where social media campaigns and demonstrations have demanded his release. The Economic Community of West African States, also known as ECOWAS, ruled against Cape Verde’s detention of Saab, and as recently as March 2021 asked for his immediate release. High-profile lawyer Baltasar Garzón, who also assisted in Assange’s defense, worked with Saab’s legal team. None of these efforts have been enough to sway the US extradition demand, or to prevent Cape Verde from buckling under US pressure.

Representatives and businesspeople from severely sanctioned countries are forced to find ways to conduct trade outside of SWIFT, the worldwide financial system that processes and tracks transactions and is dominated by the US dollar. If they dare to operate outside of this system, the US calls it money laundering and bank fraud. “This is the bogus charge against Alex Saab, as well as against [North Korea’s] Mun Chol Myong and [China’s] Meng Wanzhou,” said Stansfield Smith, writer and activist with the Chicago ALBA Solidarity Committee. “These cases open the doors for the US to charge and extradite anybody in the world for what the US calls organized crime, money laundering, or financing of terrorism, when they engaged in perfectly legal international trade which the US declares violates US law.” Smith compared the case of Alex Saab to the persecution of Chelsea Manning, Julian Assange, the Cuban Five, and Simón Trinidad.

The comments were made during a panel organized by the Alliance for Global Justice, “US Plans to Extradite Venezuelan Diplomat for Violating US Sanctions: The Case of Alex Saab,” which also featured two of Saab’s lawyers, Cape Verde’s Geraldo da Cruz Almeida and Nigeria’s Femi Falana, in addition to Canadian lawyer John Philpot, and US writer and activist Sara Flounders.

Alex Saab case: background and context of economic warfare on Venezuela
Smith elaborated on the background of the case. For over five years, Venezuela has been suffering from a total economic and financial blockade imposed by the US, Europe, and other US allies. “We underestimate how deadly sanctions on a country can be,” said Smith, adding that there have been more civilian deaths in Venezuela during the last five years than the total number of Afghan civilian deaths reported in 20 years of US assault on the Asian country.

US sanctions, which the UN General Assembly calls “unilateral coercive measures” and labels as illegal, can have a tremendous impact by virtue of the US dollar being the hegemonic  international reserve currency. About 45% of all international transactions among countries and companies are carried out in the US dollar, and over 95% of international trade is processed in the US dollar or the currencies of “its subservient allies,” like the euro, British pound, Japanese yen, or Canadian and Australian dollars. As the SWIFT system, through which these transactions pass, is US-controlled, unilateral coercive measures can be enforced through it, by blocking Venezuelan trade and imports-exports, and by freezing or seizing Venezuelan assets held in international financial institutions.

Smith also mentioned the damaging effect of sanctions on “third parties,” that is to say, countries that have no sanctions against Venezuela, or companies/individuals from any country that tries to trade with Venezuelan state-owned or private companies, which end up facing huge fines levied by the US Securities and Exchange Commission (SEC) or by the Office of Foreign Assets Control (OFAC)—measures intended to scare away any potential investors. “Therefore, US control of the international financial system is key to the enforcement of unilateral coercive measures over the whole world, irrespective of whether other countries and companies want to cooperate or not,” explained Smith.

Political persecution
According to Geraldo da Cruz Almeida, a Cape Verdean lawyer who is part of Saab’s legal defense, “it is clear from the language of the US indictment that this is a politically motivated case. Any serious judge who analyzes the case properly would come to the conclusion that the evidence presented is not sound; that it is not a money laundering crime but the fabrication of a money laundering crime—a crime that Mr. Saab did not commit.”

Unfounded accusations
“The facts of the case do not support the allegation of money laundering,” stated Nigerian lawyer Femi Falana. “The United States instigated the Swiss general prosecutor to open a file and investigate the allegations of money laundering… The Swiss general prosecutor has issued a report in which it said that there was no material evidence to support the allegation of money laundering charges against Mr. Alex Saab… A country that subscribes to the rule of law, would have ceased, would have closed the chapter, the file, but the United States of America, which is politically motivated as far as this case is concerned, has continued to harass and intimidate Cape Verde.”

In September 2020, just three months after Saab’s detention, the US promised $1.5 million of additional investment in Cape Verde, allegedly to support the country’s economic crisis. The financial assistance “builds upon historic US foreign assistance provided to Cape Verde totaling more than $284 million over the past 20 years,” stated the US Embassy in Cape Verde.

Illegal extradition
“The extradition request is illegal because there is no extradition treaty between the United States and Cape Verde,” stated Falana unequivocally.

Almeida labelled Saab’s detention as irregular, and opined that the orders of the Cape Verde court regarding his arbitrary arrest, imprisonment, and extradition trial suffer from grave legal lapses. “It is interesting to note that the United States, which actively participated in the formation of the UN and drawing up of the UN Charter, evades the jurisdictions of all UN judicial structures,” Almeida commented. “Similarly, Cape Verde, which participated in the foundation of ECOWAS and its court, now refuses to recognize the jurisdiction of the same court, although all orders of the ECOWAS Court are binding on all the members of the body.” Recall that on March 15, 2021, the ECOWAS Court ordered Cape Verde to release Alex Saab, but the judiciary and the executive of the country refused to comply and went ahead with the extradition trial.

According to the legal expert, this also contradicts Cape Verde’s own law of territorial jurisdiction, which states that a person accused of a crime can only be judged under the law of the country in whose jurisdiction said crime was committed. “Cape Verde considers itself competent to judge the Saab case as a money-laundering crime, when it actually does not have the competence to do so,” analyzed Almeida. “Whether Saab committed a crime at all or not is outside of US jurisdiction also, for Saab never worked in the US, and never lived in the US. He is a Venezuelan citizen, and his work was in Venezuela, so he can be judged under Venezuelan law only. It is for the relevant authorities in Venezuela to decide if he committed any crime related to his work.”

“In addition,” continued Almeida, “US law cannot be used at all because it considers Saab guilty even prior to judgement, because the US government declares ‘illegal’ the funds that Saab was provided by the Venezuelan government. In my opinion as a professor of law, if Saab gets extradited to the US, it would signify that we have condemned an innocent man for a crime he did not commit.”

According to Almeida, a constitutional tribunal should decide the case, “and it will not permit extradition.”

Rogue nation: US violates its own laws
In response to a question by Sara Flounders of International Action Center, regarding what may happen if the US government manages to get Saab extradited, Almeida insisted that, even if he gets extradited, according to US law Saab can never face  conviction. “The indictment submitted by the US is not legally sound, for it contains structural problems—no serious court would ever consider it,” added Almeida. As an example of this, he cited the phone call mentioned in the indictment, a call that Saab allegedly placed from Miami, Florida. “It was the only thing that Mr. Saab may have done from US soil, and even then its date and time are not mentioned.” In Almeida’s opinion, several similar lapses make the indictment incomplete.

However, Flounders also pointed out that US authorities tend not to follow their own laws, and Saab may therefore be unjustly incarcerated in a maximum security prison for years without trial, similar to victims of extraordinary rendition held at the infamous Guantánamo Bay prison.

International campaign
During the webinar, William Camacaro from the Alberto Lovera Bolivarian Circle of New York raised the proposal of organizing a broad international solidarity campaign for the Alex Saab case with the help of chapters in different cities. In addition, Flounders and Philpot advanced the idea of sending an international delegation of legal experts to Cape Verde to raise awareness and study the case in depth.

Featured image: Street mural in Caracas with the face of Alex Saab and the caption “I’m the object of an unprecedented legal persecution to oust President Nicolas Maduro.” File photo.

Special for Orinoco Tribune by Saheli Chowdhury and Steve Lalla