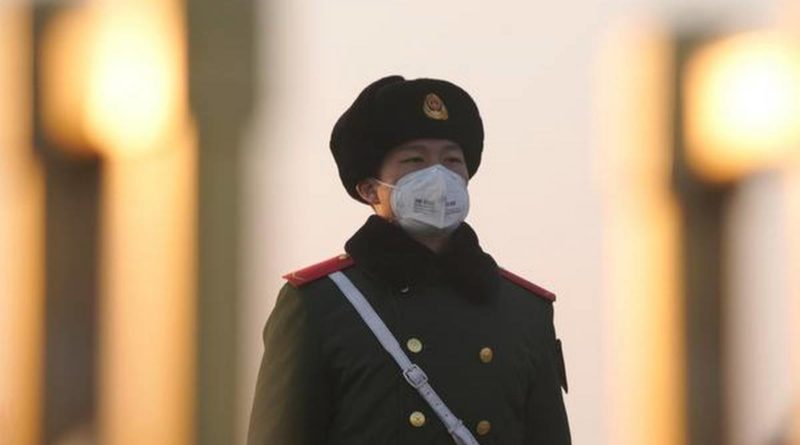 An underlying theme behind the Western political and media focus on the coronavirus, is to damage and undermine China’s international standing, the country where this disease is commonly purported to have spread forth from. Prominent American politicians like Mike Pompeo, the US Secretary of State, have publicly labelled this disease as “the Wuhan coronavirus”, in an attempt to harm China’s reputation and lay the blame at Beijing’s door.

Throughout this century, China has represented the main threat to American global hegemony, and this threat to US power has gradually been growing as elites in the West are only too aware. The coronavirus, whose spectre is being exaggerated by the establishment, provides an excuse to tighten the choke-hold on China.

This is happening in the shadows, away from the public glare. Indeed, China is already surrounded by hundreds of US military bases in the east Asian and Pacific regions, and for well over a year Beijing has been embroiled in a bitter trade war with Washington.

Although it may sound cynical, we can recognise another central factor behind the coronavirus hyperbole: that it is being exploited by the powers-that-be, in order to frighten and keep under control a world populace which has increasingly been rebelling against the assaults of neoliberal globalisation (1). A supposedly all-consuming virus is an ideal opportunity to warn the public not to gather outside in large groups, to remain isolated from each other and stay indoors. Simply put, be obedient and passive.

A serious infectious ailment like the coronavirus does, up to a point, merit attention and concern. It would be disingenuous to suggest otherwise, particularly when the cases are notably increasing in number. The coronavirus is far more dangerous in comparison to influenza (flu) – on up to date statistics, it has a death rate which is more than 20 times greater than the flu (2). Yet these figures are evolving, and will change over the course of time, becoming more or less severe; quite often the latter case.

It is important to put the coronavirus into context and provide some perspective. Since late December 2019 until the present, just over 4,600 deaths have officially been attributed to the illness, out of a global human population of 7.8 billion. This makes a world death toll of a tiny fraction of 1%. Among those who have died, just over 3,000 of them were Chinese citizens, comprising more than 60% of the combined fatality count.

As things stand, one is far more likely to suffer death in an automobile accident, than either contracting the coronavirus or succumbing to it. Each year there are around 1.3 million deaths worldwide from traffic accidents. Almost 40,000 people were killed on the roads in America during 2019; in China, there are on average 250,000 road fatalities each year. The number of cars worldwide are responsible for 20% of global carbon emissions.

Nevertheless there are no large-scale media campaigns directed against the hazards of vehicles. Quite the opposite, car manufacturers are regularly advertised in the corporate press; who, at the same, claim to have sincere concerns about the worsening climate crisis.

Since the first coronavirus case was said to have occurred in eastern China over two months ago, there are at the time of writing a reported 130,000 coronavirus infections globally – with it thought to have spread to 113 nations and counting, more than half of the world’s countries (3). However, this does not constitute a pandemic, as the World Health Organisation (WHO) mistakenly insists, who themselves have a somewhat dubious history in these affairs, as will be discussed below further.

A pandemic is an outbreak of disease that is occurring over both a wide geographic area “and affecting an exceptionally high proportion of the population” (4). This stark description, which can be found in separate dictionaries, seems to have escaped the attention of the WHO. It cannot be claimed that over 100,000 infections out of a world population of almost eight billion is an exceptionally high proportion of the population. This ratio accounts once more to a small fraction of 1% of all humans. In reality this is not remotely a pandemic as of yet.

Panic-inducing media headlines fail to mention that the majority of all coronavirus cases have still occurred in mainland China, where more than 80,000 people are reported to have been infected.

Even in this instance, there are firm indications that the disease has successfully been contained by Beijing’s authorities (5). Over three weeks ago and more, around 2,000 new coronavirus cases were recorded in China daily; but this worrying figure has dropped dramatically, with a mere 40 new cases in China occurring on Monday this week, the lowest number since tracking began. If the virus can be smothered in the world’s most populace country, surely the same can be achieved elsewhere.

States such as Italy and Iran, with much smaller populations than China, are well advised in seeking Beijing’s counsel on how to suppress this disease.

Much of the reporting on the coronavirus has been misleading and sensationalist. It is receiving an extent of media coverage that is not afforded to much more serious issues, like nuclear weapons and climate change – in particular the nuclear threat, which is barely focused on or even understood, despite the fact it remains the single greatest threat facing mankind.

The American author and military analyst Daniel Ellsberg said last year that, “It is true that climate change may totally disrupt civilisation as we know it, but how many lives would it cost? Whatever the number, some form of civilisation would probably survive. By contrast, a nuclear winter, which has a non-zero possibility of occurring, would occasion near extinction”. (6)

Ellsberg estimates that two years after a nuclear winter – which would spread globally in the weeks following a nuclear war between America and Russia or China – that about 100,000 people would be left alive out out of 7.8 billion. Hence his accurate description of “near extinction” for humanity, in the event of a nuclear war between the major powers. One will do well to find mention of this in mass media journals, however.

An interested scholar will also have to search hard in newspaper archives to learn anything about the near-deadly accidents, involving nuclear bombs through the decades, of which there have been many. (7)

One should be cautious whenever the mainstream press and first world politicians strongly push a certain agenda. This was most obvious in recent years with the ludicrous claims that Moscow decided the 2016 US presidential election in Donald Trump’s favour, which the American public paid scant attention to.

The WHO, who have a history of unnecessarily overestimating threat of infectious diseases under suspect circumstances, have done little to dampen the hysteria regarding the coronavirus. According to the experienced German physician Wolfgang Wodarg, who is also an expert in analysing the spread of contagious diseases, the WHO is “unduly influenced by pharmaceutical companies”, as came to light with the swine flu pandemic of a decade ago.

The swine flu of 2009 to 2010 can be classed as a pandemic, with 700 million to 1.4 billion people infected with what was an overall mild ailment (8). This may have consisted of up to 21% of the planet’s then human population.

RELATED CONTENT: Chinese Government Spokesman: “It Could Have Been the US Army that Brought Covid-19 to Wuhan”

The chief goal of the pharmaceutical industry, which is held dominion over by giant corporate entities, is to the requirements of short-term profit-making, like all corporations. Dr Wodarg further remarked of the swine flu in relation to pharmaceutical companies that, “the declaration of a pandemic hugely enriched the industry at the expense of taxpayers and governments”. (9)

The business of big pharma is accumulation of wealth for their elite base, and not in serving the public interest. An infamous virus represents a financial opening and bonanza for pharmaceutical corporations. The coronavirus is being capitalised upon with the assistance of politicians and media, whose actions are often dictated by large businesses in the neoliberal era. The media are reliant on revenue from corporate advertising, including big pharma adverts. Most media companies even have pharmaceutical representatives sitting in their boardrooms. (10)

During the panic regarding the swine flu, pharmaceuticals enjoyed billions of dollars worth of profits, as governments were compelled to stockpile huge levels of drugs and vaccines, most of which were never used. The WHO guidelines were written up by scientists on the payroll of big pharma. Paul Flynn, a veteran former British Labour MP, said that “The tentacles of drug company influence are in all levels in the decision-making process” (11). This very likely remains the case pertaining to the coronavirus.

There is another significant reason behind the campaigns of virus scaremongering. A critical one is to try to weaken China as a state, by impacting negatively upon Beijing’s ability to spread its financial clout and influence across continents. As a result of the coronavirus frenzy, the Chinese government is “losing leverage in dealings with the US and other developed countries” while “the US economy and markets could actually benefit from the coronavirus”. (12)

China is the only nation that can even attempt to challenge American dominance in the global arena. Over these past 20 years China’s neighbour, Russia, has re-emerged as a major power under Vladimir Putin, with Moscow’s presence on the international scene having grown considerably. Regardless, Russia remains a much weaker country when compared to the US. In military terms alone, the Kremlin’s annual arms expenditure amounts to less than 10% of the US, and this chasm is widening.

China’s military budget, the second largest in the world, is about a third that of America’s. The vast economic projects of Beijing, like the Belt and Road Initiative (BRI), are being constructed on an unprecedented scale in modern history. This has drawn considerable international and economic influence to China, not to mention prestige.

It would have been unimaginable at the end of World War II – when American strength was at its peak – that the western superpower would have no involvement in a landmark industrial program such as the Belt and Road, which is headquartered in Beijing. Unfortunately for Washington this has proven the case.

The Americans are also excluded from Beijing’s other milestone associations, like the Shanghai Cooperation Organisation (SCO) and the Asian Infrastructure Investment Bank (AIIB). The AIIB, centred in the Chinese capital and established in 2015, can count among its members crucial US allies like Britain, Israel, Saudi Arabia, Australia and South Korea; along with dozens of other countries, some of them NATO states. This is a major development in international affairs, as many traditional American-friendly nations defy Washington’s wishes in entering organisations controlled by Beijing.

Britain’s decision to join the AIIB four years ago drew a particularly withering response from the White House. A top US official under president Barack Obama lamented that, “We are wary about a trend toward constant accommodation of China, which is not the best way to engage a rising power” (13). Instead one can presume that the best way to engage a rising power, is to surround it with military forces on an enormous scale – which is precisely what the Obama administration had accomplished by late 2016 in its encirclement of China.