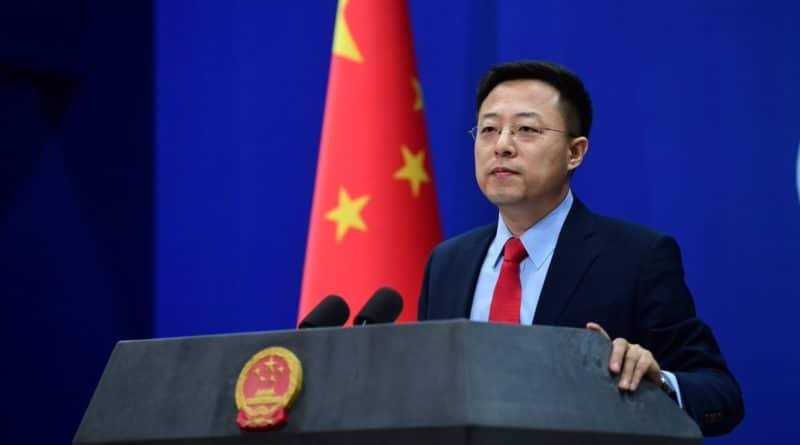 The spokesman for the Ministry of Internal Affairs of the People’s Republic of China, Zhao Lijian, raised the possibility that the United States Army was the one that brought the Covid-19 coronavirus epidemic to Wuhan, the Chinese city where it was first reported the disease, in response to the US government’s accusation of “lack of transparency” against its Beijing counterparts.
In two tweets written in English, Lijian noted that director of the U.S. Center for Disease Control, Robert Redfield, admitted to the U.S. Congressional Oversight Committee that some Americans believed to have died of the common flu or influenza, tested positive on postmortem coronavirus examinations.
The Center for Disease Control was caught on the spot. Who was the first patient with the virus in the United States? How many people are infected? In which hospitals were they treated? It could be the United States Army that brought the epidemic to Wuhan. Be transparent! Make your data public! The United States owes us an explanation!

“The United States reported 34 million cases of influenza and 20 thousand deaths. Please tell us: how many are related to Covid-19?” Lijian later tweeted, mentioning the official account of the Center for Disease Control.
The comments of the Chinese Foreign Ministry spokesman come after the President of the United States, Donald Trump, and other US officials accused the Beijing government of alleged “slowness” in reacting to the virus, detected for the first time in the city of Wuhan at the end of last year, and of not being “transparent enough”.
Hours earlier, another Foreign spokesman, Geng Shuang, had criticized US officials for “immoral and irresponsible” comments blaming Beijing’s response to the coronavirus for worsening the global impact of the pandemic.

1/2 CDC Director Robert Redfield admitted some Americans who seemingly died from influenza were tested positive for novel #coronavirus in the posthumous diagnosis, during the House Oversight Committee Wednesday. #COVID19 pic.twitter.com/vYNZRFPWo3

RELATED CONTENT: COVID-19 Coronavirus “Fake” Pandemic: Timeline and Analysis
Although the new coronavirus started in the Chinese city of Wuhan in late December, the origin of the virus outbreak remains an enigma.

2/2 CDC was caught on the spot. When did patient zero begin in US? How many people are infected? What are the names of the hospitals? It might be US army who brought the epidemic to Wuhan. Be transparent! Make public your data! US owe us an explanation! pic.twitter.com/vYNZRFPWo3

Philip Giraldi, a former official with the US Central Intelligence Agency (CIA) opined in an article published by Hispantv that his country could have “created” the dreaded virus, in collaboration with Israel, as a biological warfare weapon to harm China and Iran. His statements are in addition to several analyzes that do not rule out the role of the United States in this epidemic that has already been classified as a pandemic by the World Health Organization (WHO).

Some #influenza deaths were actually infected with #COVID-19, Robert Redfield from US #CDC admitted at the House of Representatives. US reported 34 million cases of influenza and 20,000 deaths. Please tell us how many are related to COVID-19? @CDCDirector pic.twitter.com/vYNZRFPWo3

Featured image: Zhao Lijian, spokesperson for the Foreign Ministry of the People’s Republic of China (File).