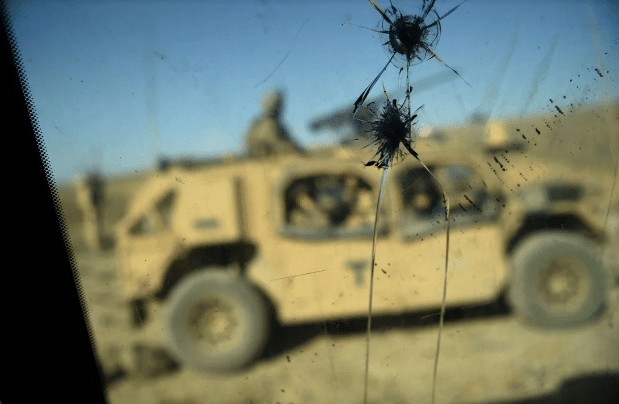 The ex-Soviet states of the Caucasus and Central Asia have, following the early 1990s, been “all about America’s energy security” according to Bill Richardson, the Clinton era diplomat and former American ambassador to the United Nations.

For seven decades, the Soviet Union’s existence blocked the way to the vast fossil fuel sources of the Caucasus, Central Asia and also the Caspian Sea. This reality had been of ongoing frustration to Western strategic planners, but the Soviet collapse 30 years ago provoked jubilant scenes in Washington and London.

An oil rush ensued for mastery over Eurasia. Among those competing for its riches were America and its junior partner Britain, along with France, Germany and China. The US, still comfortably the earth’s most powerful country, led the charge. Political scientist Zbigniew Brzezinski, an influential former US National Security Advisor, wrote how “Ever since the continents started interacting politically, some 500 years ago, Eurasia has been the center of world power”. (1)

Brzezinski, whose advice was sought by consecutive US presidents, defined Eurasia as the entirety of the landmass east of Germany and Poland, spanning the thousands of miles of Russian and Chinese terrain to the Pacific Ocean; including the coveted Middle East and south Asia (2). Brzezinski revealed that after the USSR’s disintegration the US looted around $300 billion in Russian assets, severely undermining the rouble, while ensuring the Kremlin would be reliant on the West economically and politically.

The Americans are often concerned with simply having control over oil and gas reserves, rather than extracting it; and so denying the raw materials to their principal rivals, Russia and China, while increasing their own power. On other occasions it is apt to build the necessary infrastructure, such as pipelines and refineries, which are used to dispatch the mineral resources westwards and that are guarded by US and NATO troops.

The Caspian Sea, which is larger in size than Germany, has long been desired by colonial planners and oil men, the Australian-born author John Pilger noted (3). In the late 19th century for example Tsarist Russia, which claimed the Caspian Sea for its own, fought efforts to buy it up by the US Standard Oil Company, owned by John D. Rockefeller, America’s richest man.

Undeniably, the Caspian Sea is a magnificent body of water, stretching across the horizon for hundreds of miles. It is home to endangered animals such as the Caspian seal, and rare sturgeon species like the beluga; this is the largest freshwater fish in the world, reaching a maximum of over 23 feet in length, and the beluga sturgeon may just surpass the great white shark in size, though not in weight. Impressive mammals can occasionally be seen roaming along the Caspian Sea’s shorelines, like the Eurasian lynx, Caspian wolf, wild boar and Caspian red deer. (4)

The Caspian Sea contains the planet’s second largest oil and gas reserves (5). These raw materials would have a pivotal part in fulfilling humanity’s future energy demands including, most of all, that of the US. Per capita, America is currently the biggest consumer of fossil fuels on earth by far and also historically. In 1960, there were 61 million vehicles in the US for a population of 181 million, equating to 1 car for every 3 Americans – remarkable figures; whereas in Britain in 1960, there were under 5 million vehicles for a population of 52 million, amounting to less than 1 car for every 10 Britons (6) (7). This is an example of America’s unrivalled industrial power, and it must be said of its contribution to global warming.

The Caspian Sea was important to America for other reasons. President George W. Bush, and his successor Barack Obama, made extensive efforts to shift the east European state of the Ukraine under NATO’s umbrella; in part, so the Ukraine would act as a springboard to assist America in penetrating much of Eurasia, enabling them to reach the Caspian Sea. Obama’s government had a central role in instituting a pro-Western regime in Kiev, during February 2014. Obama made further steps to expand US influence across eastern Europe, under the pretexts of the Ukraine crisis and humanitarian concerns.

Russia’s incorporation of the Crimean peninsula in March 2014, which was a response to the putsch in Kiev, was a blow to Western power. The Crimea acts as an oil and gas corridor, in which the Caspian Sea natural resources are sent through, thereafter criss-crossing Ukrainian land.

For the Americans, to safeguard their control over crucial areas while protecting the oil and gas pipelines, they started to militarise their transport routes – from the eastern Mediterranean to the edge of China’s western borders. Along these regions, about 100,000 US soldiers were stationed in order “to deter aggression and secure our own interests”. (8)

As planned, it would allow America to win the great game in the heart of Eurasia’s landmass, and consequently to secure their global hegemony. Washington stated that they wanted, “A stable and prosperous Caucasus and Central Asia” which would “facilitate rapid development and transport to international markets of large Caspian oil and gas resources, with substantial US commercial participations”.

Afghanistan in south-central Asia became highly significant to US ambitions. There have been three potential routes that the pipelines can be laid through: across Russian, Iranian or Afghan territory (9). Reliance on Russia is out of the question, while the White House has spent decades trying to isolate the Islamic Republic of Iran.

Afghanistan, therefore, ranks as a core pipeline hub. The US-NATO invasion of Afghanistan sanctioned on 7 October 2001, and clearly planned months before the 9/11 attacks, was concerned supposedly with capturing Al Qaeda boss Osama bin Laden, defeating the Taliban, and defending human rights. These were smokescreens to obscure their real goals, like securing the pipeline routes. Two months after the invasion began, a small group of US special forces conducted a half-hearted search for Bin Laden in the Tora Bora caves and mountains of eastern Afghanistan. It was a spectacle put on for the cameras.

By early December 2001, Bin Laden was not in Afghanistan at all but was present in north-western Pakistan. American General Tommy Franks, commanding US military operations in Afghanistan, had already confirmed on 8 November 2001, “We have not said that Osama bin Laden is a target of this effort”. (10)

Regarding the now much lamented Taliban, in the mid-1990s they were welcomed and supported by the US government and sections of the media. One of the largest circulating American newspapers, the Wall Street Journal, announced in May 1997, “The Taliban are the players most capable of achieving peace. Moreover, they are crucial to secure the country as a prime trans-shipment route for the export of Central Asia’s vast oil, gas, and other natural resources”. (11)

No concern was voiced about the Taliban’s extremism and human rights violations, while they were courted too by the US oil industry. In December 1997, the Taliban leadership was flown over to America and the oil state of Texas, whose governor was the future president Bush (12). Senior Taliban members were invited to the city of Houston, and there they were entertained by top executives of the energy multinational UNOCAL (Union Oil Company of California).

UNOCAL offered to pay the Taliban 15 cents for every 1,000 cubic feet of gas they allowed to be pumped across Afghan land (13). In agreement with the Taliban, UNOCAL signed a “memorandum of understanding” to construct a pipeline from Turkmenistan to Pakistan via Afghanistan. This was in conjunction with other Western fossil fuel corporations like ExxonMobil, Chevron, British Petroleum (BP), Enron and Amoco; the latter firm was formerly the Standard Oil Company of Indiana, established by Rockefeller.

The importance of Afghanistan to Washington and its NATO allies has related to further large-scale initiatives, as the American historian Noam Chomsky writes, “the projected $7.6 billion TAPI pipeline that would deliver natural gas from Turkmenistan to Pakistan and India, running through Afghanistan’s Kandahar province, where Canadian troops are deployed”. (14)

Enron, mentioned above, was an American energy company founded by disgraced US businessman Kenneth Lay in 1985. Lay had been an old friend of the Bush family, and he was among the largest financial donors to Bush’s 2000 presidential campaign (15). As Enron’s boss, Lay was in the late 1990s one of America’s highest paid chief executives. Enron filed for bankruptcy in December 2001, and in July 2004 Lay was indicted by a Grand Jury in Texas on criminal charges. In May 2006 he was found guilty on 6 counts of conspiracy and fraud, facing up to 45 years in jail. He died of a heart attack in July 2006.

Meanwhile, UNOCAL’s vice-president John J. Maresca had said in February 1998 “we have made it clear that construction of the pipeline we have proposed across Afghanistan could not begin until a recognised government is in place, that has the confidence of governments, leaders and our company [UNOCAL]”. Maresca later became the first US Special Ambassador to Afghanistan. Central in pushing the pipeline deals were prominent US politicians like Dick Cheney, James Baker and Brent Scowcroft. They had all served in the cabinet of president George H. W. Bush (Bush Senior); Cheney and Baker have long-held ties to the oil business.

Bush Senior was a key adviser to the Carlyle Group, and he met the Bin Laden family on two occasions (17). According to journalist Cindy Rodriguez in the Denver Post, on the very day of the 9/11 attacks “members of the Carlyle Group – including Bush Senior and his former Secretary of State, James Baker – were meeting at the Ritz Carlton Hotel in Washington, D.C., along with Shafiq bin Laden, another one of Osama bin Laden’s brothers” (18). This conference was hosted by the Carlyle Group.

Bush Senior quit his role with Carlyle in October 2003, after five and a half years advising them. The former president resigned from his position at Carlyle because he was “under pressure due to the company’s massive Iraqi war profits”, the American author Deanna Spingola writes, referring to the March 2003 US-led invasion of that country launched by Bush Junior.

The relationship between Carlyle and Bush Senior did not end there, however. Spingola wrote that after the elder Bush’s resignation, “He retained his Carlyle stock, and gave speeches in Carlyle’s behalf, for a $500,000 fee. Carlyle is notorious for buying defense companies and ‘doubling or tripling their value’ due to abundant, frequently no-bid, defense contracts”. (19)

Associated too with the Carlyle Group was Baker, the Secretary of State under Bush Senior from 1989 to 1992. Baker was an adviser to Carlyle for 12 years until 2005, and he had a staff member role in Bush Junior’s administration. John Major, the former Conservative Party leader and British prime minister for over 6 years, was also employed by Carlyle. Major was paid hefty sums by that US investment firm.

Major previously labelled bloated incomes as “distasteful”, and yet he accepted hundreds of thousands of pounds from Carlyle (20). It provides another insight into the world of political elites. Bush Junior had founded an oil company in Texas during the late 1970s, called Arbusto Energy. Bin Laden’s eldest brother, Salem bin Laden, was an investor in the company. (21)

14 Noam Chomsky, Making the Future: Occupations, Interventions, Empire and Resistance (Hamish Hamilton, 23 February 2012) All Options Are On The Table

Featured image: US soldiers who are part of the Nato deployment are seen through the cracked window of an armoured vehicle in Afghanistan’s Nangarhar province in July 2018. US retrenchment in Afghanistan was a campaign promise by President Donald Trump. Photo: AFP