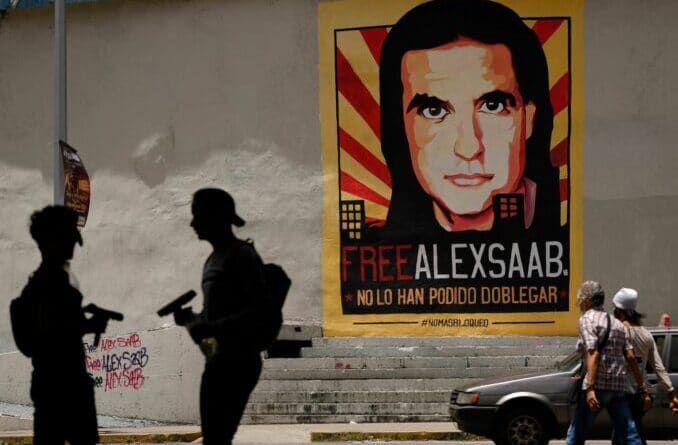 The Venezuelan diplomat Alex Saab was renditioned and kidnapped to the U.S. on October 16 without waiting for a final extradition decision. The action was taken in secret, without notifying his defense team and without relevant documentation. Saab had been imprisoned in Cabo Verde since June 12, 2020, for trying to buy humanitarian supplies for Venezuela in legal international trade but in violation of illegal U.S. sanctions.  His case raises dangerous precedents in terms of extraterritorial judicial abuse by the US in enforcing its sanctions – unilateral coercive measures on Venezuela and other countries comprising a third of humanity.

The reason the U.S. is persecuting Alex Saab, revealed by Forbes Oct. 6, is because he is “the key that unlocks the Venezuelan monetary mystery—that is, how a country facing sanctions from the U.S., the UK and the European Union—is still able to export things like gold and oil…and really the only man who can actually explain how the country [Venezuela] survives today.”

As the Oct. 17 New York Times admits: “If Mr. Saab were to cooperate with American officials, he could help untangle Mr. Maduro’s economic web.” The U.S. has been attempting to extradite Saab to use whatever means necessary to extract sensitive information from him. Saab already reports that his surrogate captors in Cabo Verde had unsuccessfully employed torture to try to break his will and induce him to betray Venezuela.

After an exhaustive investigation by Swiss prosecutors of the U.S. charge that Saab had used Swiss banks for “money laundering,” the case was dropped. Still the US accuses Saab of “loot[ing] hundreds of millions of dollars from starving Venezuelans,” when this is precisely, admittedly, and purposely what the US blockade is doing. (Forbes Oct. 6)

Over 100,000 Venezuelans have perished due to lack of food and medicine. Apologists for the U.S. blame the government of Nicolás Maduro. But if Venezuela’s Bolivarian Revolution was so corrupt and inefficient, the US would have no need to violate international law by imposing unilateral coercive measures to achieve its policy of regime change.

U.N. Special Rapporteur on unilateral coercive measures and human rights, Alena Douhan, urged the U.S. and its allies to drop sanctions imposed against Venezuela. Yet Biden, seamlessly following Trump and Obama before him, justifies the illegal sanctions on the incredulous grounds that Venezuela poses an “extraordinary threat” to U.S. national security.

A clear violation of international law
The United Nations has repeatedly condemned the use of unilateral coercive measures as a violation of international law. The U.N. Human Rights Committee has explicitly demanded the release of Alex Saab. The regional Economic Community of West Africa (ECOWAS) Court, which has legal jurisdiction over Cabo Verde, where Saab was imprisoned under U.S. orders, demanded the diplomat’s release and payment to him of compensation.

Under the Vienna Convention, a credentialed diplomat such as Saab has absolute immunity from arrest, even in the time of war. Saab has also appealed to the U.S. 11th Circuit Court of Appeals on the basis of his diplomatic status. In response, Washington filed an application for an extension to reply in a legal delaying tactic to allow Saab’s extradition without recognizing his diplomatic immunity.