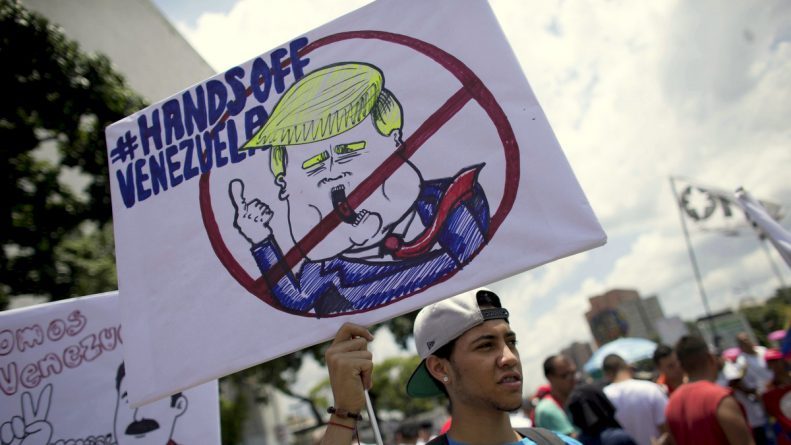 America has a history of interfering in Venezuelan affairs.

09/Feb/2019.- Root causes of the ongoing crises in Venezuela may be increasingly apparent, as the situation in the country reaches a perilous state. Venezuela contains one fifth (20%) of the planet’s known oil reserves, equal to the combined quantities of Iran and Iraq, while leaving Saudi Arabia trailing in second place.

The United States’ fixation on Venezuela is mostly due to the South American nation’s near-bottomless resources. Should a figure sympathetic to American desires oust the 56-year-old president Nicolás Maduro, control over Venezuela’s earthly materials would provide US hegemony with a tremendous boost.

A Venezuela entirely amenable to American business interests would stem the superpower’s ongoing decline, which can be traced to the “loss” of China in October 1949 – with further erosion occurring over the ensuing decades, and quickening this century following calamitous interventions in Afghanistan, Iraq and Syria.

Particularly when examining highly influential nations like America, one can recognize that this is indeed an imperial power. The US has displayed expansionist ambitions for the past 196 years, dating to the Monroe Doctrine of 1823, named after then president and Founding Father James Monroe. The Monroe Doctrine outlined the need to dislodge centuries-long European colonialism from the Americas, vast areas that successive US leaders regarded as within their sphere.

Across the generations America has pursued countless foreign interventions, some on the far side of the world. As the US became increasingly powerful, their military attacks inflicted deepening misery and bloodshed, killing millions in Korea, Vietnam and Iraq.

Such historical actualities appear to escape the attention of some mainstream analysts, who instead espouse America’s “traditional global leadership role” as that of “a paradigm worthy of emulation”. Rather, “Russians have been seeking to undermine US democracy since 1945”.

The US has hardly stood alone in wishing to spread its mastery to other continents, as many imperialist nations pursued a similar path before her. The seldom mentioned occurrence is that, for those governing great powers, among the most important policies is gaining access to pivotal world regions and natural riches. Distinctly low on their wish list is improving the living conditions of the masses.

The first instance of major US imperialism was borne out under president James K. Polk in February 1848 – when America completed its capture of half of Mexico’s territory during a huge invasion, known most commonly as “the Mexican-American War”. This annexation of Mexican soil consisted of an area over five times the size of modern day Germany. The conflict lasted for almost two years and its outcome stands to present times.

Prior to the mid-1840s Mexico was a larger country than India, but following the US invasion she was stripped of territories long familiar called California, Texas, Nevada, Utah, etc.

General and US president, Ulysses S. Grant, described the attack on Mexico as “the most wicked war in history” and admitted that “We had no claim on Mexico”. The American victory allowed them predominance over areas abundant in cotton, a commodity as prized in the 19th century as oil is today.

Maduro to Americans: You Are Bigger than Trump, Don’t Let Him Start A ‘Vietnam’ War Against Venezuela.

RELATED CONTENT: Overthrow at All Costs: They Threaten Maduro With a Bullet in the Forehead
The preceding US president, John Tyler (in office 1841-1845), had a significant role in the attack on Mexico, and said that mastery over cotton would enable America to have “a greater influence over the affairs of the world than would be found in armies however strong… I doubt whether Great Britain could avoid convulsions”.

Thousands of miles away in the western Pacific, by the year 1902 America had concluded its conquest of the Philippines, which was a bloody invasion executed on opportunistic grounds. Attaining a presence on the Filipino islands ensured America a prized base of operations in the planet’s largest ocean. It thereby enhanced US power and prestige while dealing another blow to colonial Spain, whose subjugation of the Philippines dated to over 300 years before.

Moving into the post-1945 era, America has intervened in numerous states to varying degrees, overthrowing governments and erecting military dictatorships if required, from Brazil and Argentina to Guatemala and Chile. The preferred strategy has been to back a dependable dictator that will (hopefully) do as told, rather than an unreliable democratically elected leader that may seek to serve the people.

Yet an experienced Harvard lecturer, writing in a New York Times opinion editorial, outlined quite recently that America “has been one of the leading actors promoting democracy and human rights worldwide” – and “a shift in United States foreign policy would be a historic mistake”. It is only under president Donald Trump that America’s “priorities have shifted”.

Currently in Venezuela, the colossus to the north is once more tightening its grip. Trump has spoken of his admiration for the “courageous” Venezuelan populace who have “demanded freedom and the rule of law”.

Trump, along with some Latin American and European states, has thrown his weight behind opposition leader Juan Guaidó; he is a 35-year-old newcomer clearly under the sway of American persuasion having visited the US just a few weeks ago, and who enjoys “regular contact” with the White House. During his youth, Guaidó received part of his third level education in Washington D.C., at the privately-run George Washington University.

One can cast aside Trump’s aspirations for “freedom and the rule of law” when witnessing his undimmed support for nations like Saudi Arabia, an autocratic, medieval-style monarchy. Saudi Arabia has for decades been overseen by a string of ruthless authoritarians, yet enjoyed Western backing throughout.

In the meantime, while Venezuela herself is awash with oil, the country also contains the eighth largest gas reserves in the world. She is further laden with non-conventional oil deposits like tar sands (second only to Canada), bitumen and extra-heavy crude oil, while also holding other substances like iron ore and coal.

American involvement in Venezuela traces generations into the past, and began rising shortly after World War I, when gigantic oil deposits were discovered about 300 miles west of its capital Caracas. General Juan Vincente Gómez, a brutal and corrupt Venezuelan dictator – who held dominion for almost three decades until 1935 – permitted US companies like Standard Oil (today ExxonMobil) to write parts of Venezuela’s petroleum law.

By 1940, Venezuela was the third largest oil producer on earth, churning out slightly less of the substance than the USSR. During World War II, Venezuela was a key supplier of oil to both American and British war industries, thwarting Hitler’s attempts to gain a bridgehead in Venezuelan territory, where almost 4,000 German-born citizens resided.

For a decade from the late 1940s, Washington supported another Venezuelan strongman, General Marcos Pérez Jiménez (image on the right). His was one of the most murderous dictatorships in Latin America, indiscriminately eliminating and torturing its opponents.

Unperturbed by Jimenez’ shocking human rights abuses, US president Dwight D. Eisenhower awarded him the prestigious Legion of Merit decoration in February 1955 for “outstanding services to the Government of the United States”. Jimenez fled to America in early 1958 when overthrown by forces seeking something resembling democracy.

Over the past 20 years with assumption to power of left-leaning figures, Hugo Chávez in 1999 and Maduro in 2013, US influence over the mineral-rich state has been seriously hampered. Chávez and then Maduro have undoubtedly committed errors, like failing to shift the country away from its unfeasible reliance upon oil manufacturing.

At this late date oil should surely be left where it belongs, in the ground, and its long exploitation has played a key part in driving up global carbon emissions. Ongoing widespread usage of fossil fuels is unsustainable entering the years ahead, as climate change rapidly accelerates while threatening human civilization.

Much of the Venezuelan people’s hardships are, in fact, as a result of American pressures, such as an embargo to sanctions and outright threats of invasion, not a great deal of which has received broad coverage.