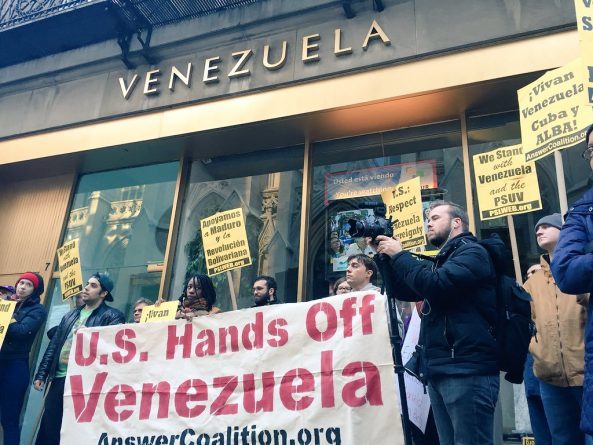 19/Mar/2019 – An emergency action was held at the Venezuelan Consulate in New York City, March 18, after news broke that supporters of the Venezuelan coup were let into Consulate by the State Department. One of the participants was live-tweeting the takeover, claiming that they “assumed control” of the Consulate.

A crowd of 30 people gathered in front of the Consulate, waving a Venezuelan flag and leading chants against the coup. Attendees attempted to go into the Consulate six times, and some hecklers trolled the action, but were quickly shouted down by the protesters.

Protest in front of the Venezuelan consulate in NYC. Today, that diplomatic mission, and two others were invaded by right wing gangsters. This is a very dangerous precedent sponsored by the US government #Venezuela #HandsOffVenezuela pic.twitter.com/A9VN87WIUO

“We found out that the Venezuelan opposition had occupied the consulate and we decided to do a picket out front. We went first with a group of 10-12 people and later we brought together a bigger group from different social organizations and movements in the city. We realized that the opposition had gotten inside of the consulate, they had already taken down the poster of Chávez, they had moved the figure of Bolívar and they had put a sign out front that said, “the Consulate will re-open to attend all of the Venezuelans that want to return” [to Venezuela from the US],” explained Manolo de los Santos from Popular Education Project and People’s Forum, two of the organisations participating in the picket.

“They were organizing some type of celebration inside of the consulate with champagne and who knows what else. It was there that we intervened and we blocked the entrance to the Consulate. Many upper-class Venezuelans who are part of the opposition began to arrive to celebrate that the opposition had occupied the consulate. However, we were there for around three hours blocking the entrance and they were unable to enter. They had to move or cancel the party that they had organized,” de los Santos described.

The call was spread by No War on Venezuela, a broad coalition of organizations against U.S. intervention in Venezuela.