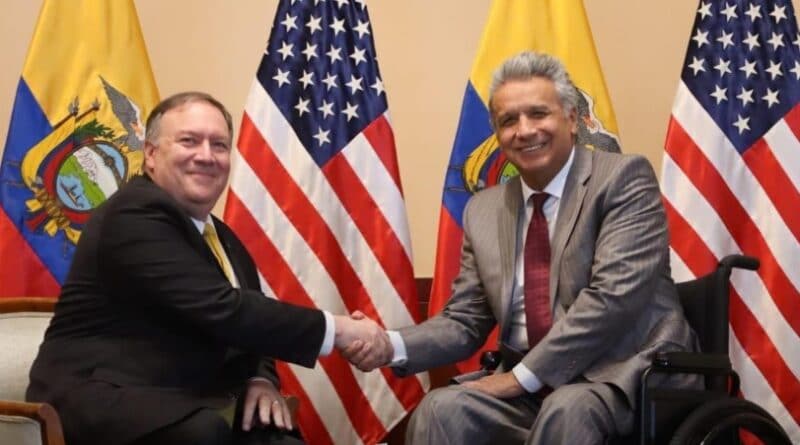 The US role in the defeat of leftist Andrés Arauz in Ecuador’s presidential contest on April 11 was not overt because it did not need to be, according to a high-ranking Latin American diplomat. We met with the diplomat and others on an official election observation delegation with CODEPINK. Names of some sources remain anonymous due to a hostile political environment towards progressives.

This setback for the Citizens Revolution movement, founded by Rafael Correa, will have profound implications for Ecuador and beyond, fortifying the US-allied reactionary bloc in Latin America.

Former President Correa left office with a 60% approval rating. He had been twice elected president on the first round; unprecedented for Ecuador, which had a turnover of seven presidents in the previous decade. His Alianza País party had won fourteen elections, reflecting the popularity of their wealth redistributive programs, including reducing extreme poverty in half.

His chosen successor, Lenín Moreno, will exit on May 24 with a single-digit approval rating. Much happened in the ensuing four years. Correa went from being the most popular democratically elected president in the country’s history to having his  political allies  rejected by an electoral majority.

¿Qué pasó? – What happened?
In 2017, Correa had campaigned for his former vice president to carry on their Citizens Revolution. However once in office, sitting President Moreno turned sharply right against his former colleagues, employing lawfare to decapitate the leadership of the Citizens Revolution. His own vice-president, Jorge Glas, is now in prison and other top officials have been forced to flee Ecuador. Correa, accused of using “psychic influence,” was convicted in absentia in an evidence-weak corruption trial that prevented him from returning to Ecuador.

According to Correa’s attorney, Fausto Jarrín, Moreno was assisted by the US in this legal dismantling of his own party. Casting pretenses aside, Moreno was in Washington on the day of the first round of the Ecuadorian presidential elections. Just before the second round, Moreno and his top officials flew to the Galapagos to meet with the US ambassador.

Moreno handed the shop over to the US.  He revoked Julian Assange’s Ecuadorian citizenship, allowing Assange to be arrested in the UK. He recognized Juan Guaidó’s bogus claim to the presidency of Venezuela. After US Vice President Pence visited Ecuador, the FBI was welcomed back. Even a US military base in the Galapagos archipelago (part of Ecuador) was gifted to Washington.

Moreno expelled the Cuban doctors and withdrew from key regional alliances: UNASUR, CELAC, and ALBA. At a time of COVID, these actions had lethal consequences. Had Ecuador instead maintained its membership in the regional organizations, their collective power could have been used to obtain vaccines and other resources to fight the pandemic.

Moreno imposed an IMF austerity package on Ecuador, only to be partly withdrawn in the face of a massive indigenous-led protest in October 2019. Then under the cover of the presidential election campaign and pandemic, Moreno reinstated the unpopular measures.

The turncoat Moreno adopted a full-throated neoliberal program and is scrambling to enact additional “economic reforms” before his term is over to prevent the next administration from “putting the toothpaste back in the tube.” But he needn’t worry. Incoming President Guillermo Lasso not only shares the same neoliberal program, but members of Lasso’s rightwing political party collaborated with Moreno in the National Assembly.

This has been a brilliant strategy for the right. Ecuador is in an economic crisis with the impacts of austerity measures exacerbated by the pandemic. By putting in place a full neoliberal program before leaving office, Moreno spares Lasso the onus of the unpopular measures while serving international finance represented by Lasso and the US.

Lawfare used to rig the electoral playing field
Ecuador’s electoral authority, the CNE, did not recognize the Arauz campaign until December for a February 7 first-round election. Arauz, who was sick with COVID in December, had spent the last four months battling for party certification while the other campaigns were gaining momentum.

Unlike their rich banker opponent, the Arauz campaign was strapped for funds to build an on-the-ground campaign infrastructure. More importantly, lawfare measures prevented them from even using their party’s name, forcing them to cobble together UNES as their new party.

Further, Correa with his considerable name recognition and popularity was banned from running as Arauz’s vice president. Worse, the party was prohibited from using Correa’s image, name, or voice in their campaign materials. Yet other parties could invoke Correa to smear the Arauz campaign by falsely accusing Correa of corruption and associating Arauz with Correa as also corrupt.

Despite all these hurdles, Arauz won the first-round election with a 32% vote, giving him a 13-point lead over second-place Lasso, but short of the 40% or more needed to avoid a second-round contest. Arauz also was leading in the polls, but that was to change with a massive disinformation campaign.

Rightwing propaganda campaign
The rightwing mobilized its near monopoly of mass media to spin sworn enemies Moreno and the Citizens Revolution as allied, in what an Arauz campaign leader characterized as the “TikTok and meme-ification” of political discourse.

Arauz, an energetic 36-year-old economic wiz, was portrayed as stupid and lethargic. In contrast, the 65-year-old conservative Lasso put on a pair of red shoes and was marketed as hip.

A four-year rightist media campaign portrayed Correa and associates as corrupt.  A Citizens Revolution militant explained, “if you repeat a lie ten times, it becomes a truth.” The “NGO left,” funded by the US and its European allies, contributed to this inversion of reality.

Struggle ahead in Ecuador
Guillermo Lasso, owner of the second largest bank in Ecuador, won with a 5-point lead. Arauz said in his concession speech: “This is an electoral setback but by no means a political or moral defeat.”

With 49 out of 137 seats in the National Assembly, his party remains the single largest bloc. The task of the Citizens Revolution politicians, according to party leaders, will be to maintain unity within their own ranks while forging coalitions with potential allies.

Meanwhile, they will have to fend off continued lawfare attacks and repression from the right. Some militants have already left the country.

The second largest bloc in the assembly with 27 seats is the ideologically diverse and indigenous Pachakutik. The Citizens Revolution’s relationships with the leadership of some indigenous organizations and, for that matter, certain labor unions have at times been contentious.

Correa opposed the clientelism of the past and shunned “selling” ministries and other positions to politically influential leaders in return for their support. Correa concentrated instead on serving the interests of their constituents with infrastructure projects for underserved indigenous regions, granting water rights, and promoting multi-cultural education and health policies. Likewise, workers got wage gains.

In retrospect, the Citizens Revolution is now openly self-critical about running roughshod over some indigenous and labor leaders. Amends will have to be made, according to a former Correa minister.

“Promoting democracy” in service of the US empire
Ruling elites hold elections to legitimize their rule, not because they believe in democracy. By the time of the 2021 presidential election in Ecuador, the playing field had been rendered so precipitously unlevel that the US had little need to overtly intervene as it did in Bolivia in 2019.

But that did not mean that the US was not actively intervening. The websites of USAID, NED, NDI, and IRI make no secret of the imperial hubris of pretending to “promote democracy” in Ecuador. The US laid the groundwork, according to a high-level diplomat, to unify the right and rig the contest against the left.

As William Blum revealed, US intelligence had prior to Correa and likely since, “infiltrated, often at the highest levels, almost all political organizations of significance, from the far left to the far right…In virtually every department of the Ecuadorian government could be found men occupying positions high and low who collaborated with the CIA for money.”

Commenting on the new Biden administration, Correa’s former Ambassador Ricardo Ulcuango observed that US foreign policy is the same with Democrats and Republicans. The Democrats, he added, are more dangerous because they are better at speaking about cooperation when they are in fact intervening.

Roger D. Harris is with the human rights organization Task Force on the Americas.

Featured image: Mike Pompeo (left), US secretary of state, and the president of Ecuador, Lenín Moreno (right), hold a meeting at the Hilton Colón hotel in Guayaquil. File photo.