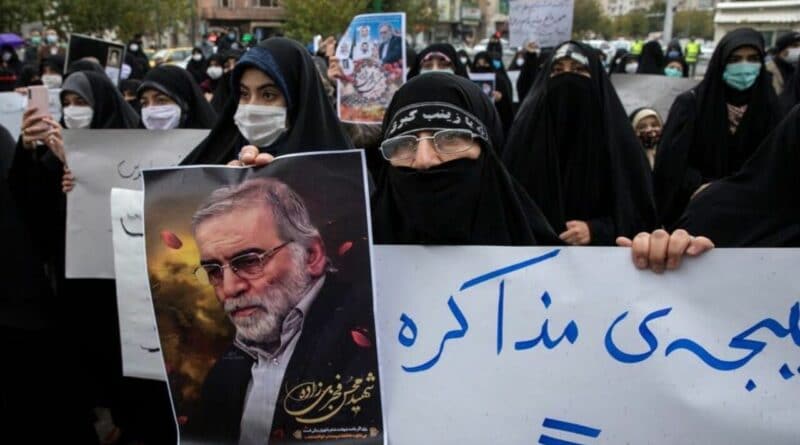 The targeted assassination of top Iranian physicist and nuclear scientist Mohsen Fakhrizadeh on Nov. 27, and Donald Trump’s immediate approving Tweet, confirm the determination of U.S. and Israeli rulers to sabotage every possible effort for peace or normalization of relations with Iran or the region.

The multi-pronged attack involved at least one explosion and small-arms fire by a number of assailants.

Regardless of who the media blame, whether Israel or the Washington-supported Iranian terrorist group People’s Mujahedin Organization, this latest act of state-sponsored terrorism follows decades of U.S. sanctions, sabotage, and assassinations against Iran, plus invasions and occupations of surrounding countries.

Almost a year ago, on Jan. 3, a U.S. drone assassinated a highly respected Iranian general, Qasem Suleimani, as he was traveling to Iraq with a peace proposal involving countries throughout the region. U.S. intelligence agencies were well aware of the peaceful purpose of his trip.

Suleimani’s assassination confirmed that U.S. leaders felt threatened by the possibility that the countries of the region might arrive at peace or reconciliation among themselves. This new assassination of a top Iranian scientist is a criminal provocation and a desperate attempt to lure Iran into a response leading to a wider war.

Iran has long maintained that its nuclear program is strictly for peaceful purposes, not weapons. Nuclear technology today is a crucial part of industrial development and even medical progress.

Never mentioned in the U.S. media is that Fakhrizadeh was a pioneer in Iran’s effort to combat the novel coronavirus. Foreign Minister Mohammad Javad Zarif described this crucial role: “One of the latest services of Martyr Fakhrizadeh was his outstanding role in the development of the first indigenous COVID-19 test kit, which is a great contribution to our national efforts in curbing the COVID-19 pandemic at a time when Iran is under inhumane sanctions of the United States, strictly preventing our access to humanitarian goods including medicines and medical equipment.” (https://tinyurl.com/y259rl9f)

Fakhrizadeh headed the Iranian Defense Ministry’s Organization of Defensive Innovation and Research. He trained many researchers to find ways to scientifically advance Iran, especially for defense. He helped apply lasers to the detection of invading aircraft.

RELATED CONTENT: When an Official Enemy is Assassinated, Corporate Media Roll Out the Pretexts

Four other senior Iranian scientists have been assassinated over the past decade. Others were injured in assassination attempts. Targeted assassinations and economic sanctions are meant to deprive countries of scientific capabilities and development.

Iran’s High Council for Human Rights denounced the atrocity as an outright violation of the country’s right to have access to science and technology in order to progress.

Iran demonstrated the peaceful nature of its nuclear program in 2015 by signing the Joint Comprehensive Plan of Action with six world powers — the U.S., Germany, France, Britain, Russia and China.

The International Atomic Energy Agency has acknowledged Iran’s compliance with this onerous agreement, after subjecting its nuclear work to extensive and recurrent examinations.

After Iran kept its part of the agreement, the Trump administration violated it in May 2018 and re-imposed unilateral sanctions on Iran. Washington then demanded that every other country also violate the agreement and impose sanctions on Iran. This illegal unilateral action outraged even other imperialists who conduct profitable business with Iran.

The incoming Biden administration wants to revive the agreement – but not to end attempts to strangle Iran. Rather, it aims to restore relations with imperialist allies who have been snubbed and insulted by Trump.

U.S. imperialists are also concerned that Iran’s expanding trade with China and Russia is undermining U.S. dominance in the region and limiting the impact of sanctions.

The latest attack is understood internationally.

Even former CIA Director John O. Brennan said the assassination of the Iranian scientist was “an act of state-sponsored terrorism” that could ignite a new round of conflict in the region.

The Israeli chair of the Institute for National Security Studies, former Maj.-Gen. Amos Yadlin, said that whoever operated in Tehran “has one eye, or maybe two, on Washington. If the Iranians respond it will enable President Trump to order his generals to act against them. And if they don’t, it could still possibly block the Biden administration from opening negotiations.”

Powerful forces in the vast military and intelligence infrastructure are committed to the strictest form of U.S. sanctions, hoping to unleash a wider war which would enormously profit the military-industrial complex.

The U.S. corporate media is crediting Israel with this latest criminal attack.

The Zionists have always been more than willing to play the role of U.S. imperialism’s attack dog in the region. Their genocidal repression of the Palestinian people and alliances with the brutal Saudi regime and corrupt Gulf State monarchies are two sides of the same coin.

In fact, Israel could not survive without the endless stream of U.S. military, economic and diplomatic support.

The U.S. has used its veto power against UN resolutions on Israel at least 43 times in recent decades. Total U.S. aid to Israel from 1946 to 2018 amounted to $236 billion. Almost all current U.S. aid to Israel is in the form of military assistance. (“U.S. Foreign Aid to Israel,” Nov. 16, Federation of American Scientists, Congressional Research Service)

An article in Haaretz on Nov. 29 reminds their generals of who ultimately pulls the strings: “With all due respect to the intelligence and military cooperation between the two countries, which has become much more extensive in recent years due to the excellent relations Netanyahu had with Trump, Israel does not have equal standing with the United States. It is America that is transferring $3.8 billion in defense assistance to Israel every year, not the other way around.”

U.S. agencies may claim little advance knowledge of the assassination of Fakhrizadeh, but the Israeli and U.S. governments are the closest of allies and have long shared intelligence regarding Iran.

Israel is not a signatory to the Nuclear Non-Proliferation Treaty and has refused to either confirm or deny the existence of nuclear weapons in its arsenal. But according to the Center for Arms Control and Non-Proliferation, “Israel is widely believed to possess 90 plutonium-based nuclear warheads and to have produced enough plutonium for 100-200 weapons.”

Thus it is sheer hypocrisy to lambaste Iran for its peaceful development of nuclear energy.

Will Biden Be Different?

Michèle Flournoy, apparently President-elect Biden’s top choice for Secretary of Defense, is a well-known war hawk. As a Defense Department official in both the Clinton and Obama administrations, Flournoy had a key role in the criminal U.S. wars in Libya and Syria and the continuing war in Afghanistan.

Both the outgoing Trump administration and the incoming Biden administration are determined to continue the sanctions and war against Iran. The only differences revolve around how best to proceed.

It is up to anti-imperialist forces in the U.S. and around the world to challenge this continuing assault against Iran. The sanctions, assassinations and military encirclement are a threat to both Iran and the people of the world.