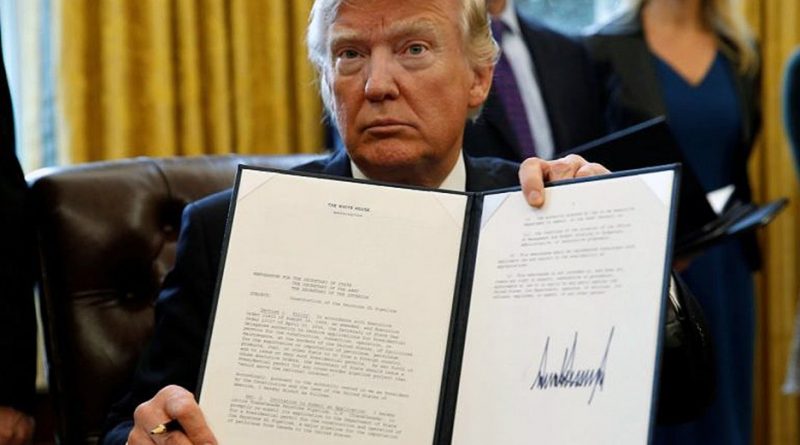 Monday, the Trump Administration reached a new zenith in its destructive acts against the Venezuelan economy and society by extending to the category of embargo the coercive and unilateral measures against the Bolivarian Republic. According to The Wall Street Journal, this measure consists of a “total economic embargo”.

Once again through his often used Executive Order the U.S. president is strengthening all actions prohibiting any relationship with the Venezuelan state by any company on U.S. soil or related to that country. The measure imposes an embargo on Venezuelan assets on U.S. soil, including PDVSA’s subsidiary CITGO.

According to the Miami based El Nuevo Herald, Trump “substantially expanded the sanctions” against Venezuela by “taking the economic blockade imposed on Venezuela to extremes similar to those applied to North Korea, Iran and Cuba.

The new measure, according to the Herald, would essentially “allow the application of sanctions against any individual or company that sustains operations or provides any type of support to the Caracas regime,” which puts into place a deepening of the asphyxiation against Venezuela.

The complexity of the measure and the derivations that it would have, means that any oil company, financial entity or any economic activity of trade in goods and services that has any link with the United States will be subject to punitive actions, applying the methodology of “sanctions” that Washington unilaterally executes against countries behind the back of international law. This would include extraterritoriality jurisdiction of  any subsidiary of a US company operating in another country.

According to international jurisprudence, the only entity empowered to issue sanctions is the UN Security Council, and for that express reason, the measures taken by the U.S. government against Venezuela are illegal.

For Venezuela, the broadening and deepening of these type of acts consists in the disqualification of the Venezuelan State and any company related to it, whether in Venezuela or abroad, from doing business with the Republic.

To explain it in detail, Venezuelan State policies such as the Local Supply and Production Committees (CLAP), which consists of importing food, or the international purchase of medicines for the public health system, will undoubtedly be seriously affected. The CLAP program provides basic food supplies to 6 million Venezuelan families that are distributed by communal councils.

The provision of essential public services, such as electricity and water, which depend largely on U.S. technologies and which are supplied by companies linked to that country, could be further compromised by the impossibility for these suppliers to enter into direct or indirect agreements with the Venezuelan state.

According to the BBC chain, Trump’s new embargo measure bears similarities to the Helms Burton Act that strengthened the US blockade of Cuba in 1996 and continues to this day. The measure prohibits – unless expressly exempted – any operation or asset belonging to any Venezuelan government entity, including state agencies such as the Central Bank of Venezuela or the oil company PDVSA, as well as any individual or group controlled directly or indirectly by them.

In a letter to Congress reported by Reuters, Trump alluded, “I have determined that it is necessary to block the properties of the Venezuelan government in light of the continued usurpation of power by the illegitimate regime of Nicolas Maduro.” The measure will be applied to “all assets and interests owned by the Venezuelan government that are in the United States, or that are under the power or control of any person in the United States. These assets are blocked and cannot be transferred, paid for, exported, withdrawn or otherwise treated,” the Executive Order states.

According to The Wall Street Journal, this is “the first time Washington has applied measures of this kind against a government in the Western Hemisphere in more than 30 years.

The measure calls into question any act of alienation, transfer and confiscation by orders of U.S. courts of CITGO, as was recently raised by a U.S. Court of Appeals ruling in favor of Crystallex, a company claiming $1.8 billion of CITGO property.

But the embargo measure grants the U.S. government’s total control of those assets in an exercise of clear discretion, which indicates no compensation of the losses of the assets of the Republic. In other words outright theft of everything Venezuela owns.

The Trump Administration’s timing is to launch a message to the framework of talks between Venezuelans that took place in Oslo and now continue in Barbados under the auspices of Norway. The intention seems clear; to torpedo any probable agreements that could be foreseen between the Bolivarian government and the opposition, since the economic asphyxiation against Venezuela is one of the essential points in those discussions.

In theory, Washington would be dissatisfied since the advances and probable agreements that would be consummated among Venezuelans would not correspond to the demands imposed by the Trump Administration and the imperial designs on the resources of Venezuela.

For his part, Secretary of State Mike Pompeo stressed that in the formula of the talks in Barbados “it would be inconceivable to have elections that really represent the Venezuelan people if Maduro continues to be present in the country.”

What Washington would be imposing is a clear intrusion into the affairs and sovereignty of another country, by giving an ultimatum that the popular reelected government of President Maduro must be removed from power and the presidency transferred to the self-proclaimed “president” Juan Guaidó, imposed by instructions from the White House. In other words, Washington is suggesting to holding “free elections” in the midst of a consummated coup plot.

The measure is announced on the eve of another meeting of the Lima Group, this time with the presence of Trump’s Security Advisor, John Bolton.  The US is not a member country of the Lima Group but is there to give them their orientation and marching orders.

Bolton said on Monday that he expected “a productive day in Lima,” boasting about the new conditions that the United States was imposing on Venezuela and infusing increased pressure against the country in a clear exercise of lobbying  and arm twisting by the U.S. government.