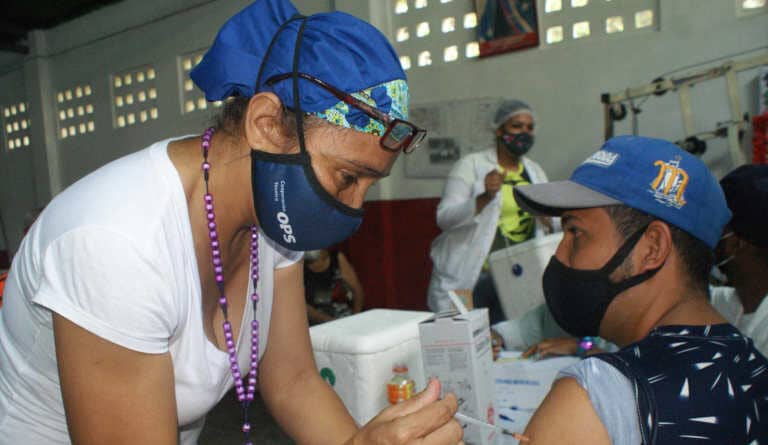 The president of Venezuela, Nicolás Maduro, reported this Sunday, November 14, that 74% of the population has been immunized against COVID-19, despite US and European maneuvers to block the purchase of vaccines.

He also stated that Venezuela aims to reach the 80% mark by November 30. This achievement in the mass vaccination plan is due to the fact that Venezuela obtained the resources to acquire them through the COVAX system, as well as through the support of allied nations such as China, Cuba, and Russia.

President Maduro reported that the states of Táchira, Cojedes, Guárico, La Guaira, and the capital, Caracas, have met the immunization goal, while the states that have not achieved the goal yet, and have the lowest vaccination rates are Barinas, Delta Amacuro, Sucre, Monagas, Apure, and Bolívar.

The president assured that Venezuela has enough vaccines for 95% of the population. “In January, Venezuela will begin booster shots against COVID-19,” he said. President Maduro urged parents and legal guardians to comply with the vaccination plan for children two years of age and older.

He stressed that this Saturday a new batch of vaccines arrived in the country, purchased by the authorities through the COVAX mechanism, despite the actions taken by the US government to impede the purchase. “They wanted to block us, and we got the funds for COVAX,” President Maduro said. “We surprised imperialism.”

In this regard, Venezuela received a third batch of vaccines consisting of 2.5 million doses from the COVAX mechanism, coordinated by the World Health Organization (WHO), reported the country’s Minister of Health, Carlos Alvarado, and the United Nations Children’s Fund (UNICEF).

“Today we received the third shipment of 2.5 million COVID-19 vaccines, through the COVAX mechanism, to continue advancing in the mass vaccination of the people,” Alvarado wrote on his Twitter account. “Thanks to the efforts made by President Nicolás Maduro, we continue to protect the health and life of everyone.”