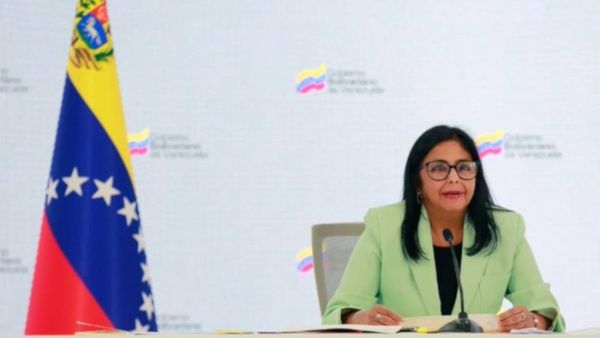 Executive Vice President Delcy Rodríguez stressed that Venezuela had completed the necesseary payment to COVAX but is yet to receive a single dose.

Venezuela has denounced the fact that it has not received any COVID-19 vaccines from COVAX, the international mechanism created by the World Health Organization (WHO) for the purpose of equitable distribution of vaccines to countries with less resources. Venezuela has not received a single vaccine dose despite having completed the necessary payment months ago.

“COVAX has distributed more than 236 million doses to countries all over the world,” stressed Executive Vice President Delcy Rodríguez, “and although Venezuela has paid $120 million, it has not received a single dose to date.”

On Friday, September 3, in a speech at the teaching staff training event Latin America at the Crossroads, Rodríguez recalled all the damages that have been inflicted upon Venezuela through the illegal unilateral coercive measures imposed by the United States.

“The worst tightening of the blockade against Venezuela occurred precisely during the pandemic,” decried the executive vice president.

Rodríguez also indicated that the Venezuelan government had paid COVAX for the doses with state resources through the international banking system.

“This is what is known as second-level sanctions,” explained Vice President Rodríguez. “We managed to recover our resources in the world banking system through great sacrifice and paid $120 million to COVAX, which was supposed to be a solidarity mechanism.”

RELATED CONTENT: Venezuelan Children Will be Vaccinated in October (Back to School)

At the beginning of August, the Pan American Health Organization (PAHO) announced that starting from August 4, Venezuela would start receiving 3.2 million vaccine doses from COVAX, of which 2.6 million doses would be of Sinopharm and 600,000 of Sinovac.

Venezuela paid COVAX the complete amount required for the acquisition of 11,374 400 doses, which were to immunize 20% of the Venezuelan population.

The COVAX platform is jointly directed by the Gavi Vaccine Alliance, the Coalition for Epidemic Preparedness Innovations (CEPI), and the WHO, in order to guarantee the equitable distribution of COVID-19 vaccines in the world.

Featured image: Vice President Delcy Rodríguez said that the Venezuelan government had fully paid COVAX for vaccine doses with state resources in the world banking system, but is yet to receive a single dose. Photo: Twitter / @ViceVenezuela