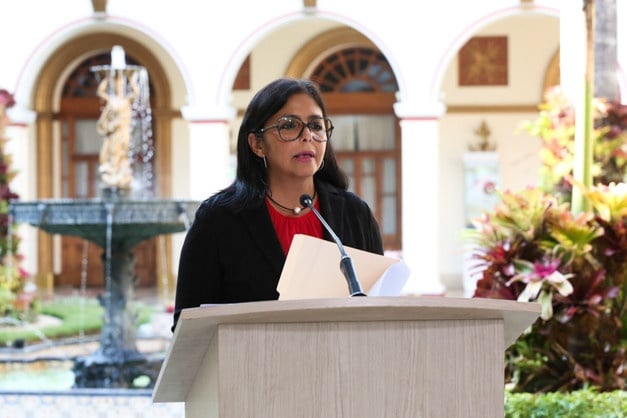 Venezuelan vice president, Delcy Rodríguez, reported this Monday, April 13 from the Miraflores Palace, that 8 new cases of Covid-19 coronavirus were registered in the country, to reach a total of 189 cases. Of these, 110 are already recovered (53 percent). Today’s new cases: 5 come from Miranda state, 1 from the Capital District, 1 from Aragua and 1 from Trujillo. Six of them were contaminated at the food processing company where they worked.

RELATED CONTENT: Why US Politicians and Media Support Lifting Sanctions on Iran due to COVID-19 but Not Venezuela
She reported that, in Venezuela, 203,108 tests of the Covid-19 coronavirus have been carried out, equivalent to 6,873 tests per million inhabitant, placing the country as the first in Latin America and the Caribbean in the number of tests carried out.
The Venezuelan vice president indicated that 18,161,036 people have completed the Survey of the Homeland System on the Covid-19. Of these, 151,801 people have been marked for house-to-house visits, 143,717 have been visited and 21,794 are undergoing more extensive testing. She recalled that when house-to-house visits are made, the entire family is taken cared of, which means that more than 12 million people have been taken cared of so far.
She also explained that President Maduro had a conversation this morning with the President of Iran, Hassan Rouhaní, both countries being affected by the illegal US sanctions, even despite the pandemic of the Covid-19 coronavirus. Both presidents expressed the need for the unlawful sanctions against both countries to be lifted.