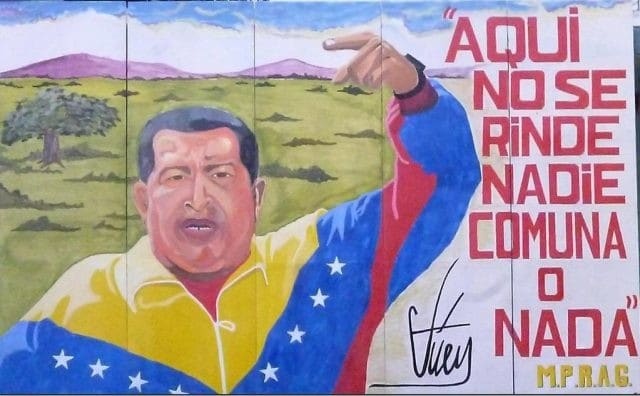 By Geraldina Colotti and Veronica Diaz

On October 20, 2012 after his historic victory over a right-wing candidate in Venezuela’s presidential elections, Hugo Chavez used a meeting with his Cabinet of Ministers to propose his strategic view, the conceptual and practical step that the Bolivarian Socialism should take from then on: a State of municipalities. He summarized it in his slogan Commune or Nothing!

The pillar of this directional change, he said back then, should be: creating a municipal State with the rule of law and justice; strengthening the power of municipalities; utmost efficiency; consolidating the national public media system; and a strong calling to criticism and self-criticism. “Through the new cycle that is beginning —he stated—, we must be more efficient in transitioning into, building the new political, economic, social, and cultural model: the Revolution.” And he delegated this task to Nicolas Maduro, his Foreign Affairs minister back then, who is now following in his footsteps.

In this connection, the National Congress of Communes has been organizing since October 16 at a national training center in the central state of Miranda, nearby Caracas. Communes Minister Blanca Eeckout met with journalists to present the topics and goals of the national and international Congress, held amidst the difficult situation currently be lived in Venezuela. Recalling the words said by Chavez to Maduro about the radical change of direction for the society, “Nicolas, I entrust you with the Communes” . Blanca repeated the phrase used by Commander Chavez to call on a municipal offensive: Commune or nothing!

“This is more than just a slogan for us, this is a command, an order, a path, an example of strength and spirit of love and solidarity. This is about Chavez’s revolution, which is continued by our worker President Nicolas Maduro and which we will ratify in this open and permanent Congress, which began after the great electoral victory in 2018,” the Minister stated.

This is an important path of innovation and resistance that U.S. imperialism has tried to block through all means, multiplying its attacks domestically as well as internationally. Minister Eeckout summarized the phases of this difficult situation marked by the U.S. Empire’s asymmetrical war, aimed at preventing the Venezuelan people from fully exerting their sovereignty through participatory and leading democracy. “Following the guarimbas (violent street barricades), Trump and white supremacists decided that we did not have the right to decide about our future. They started to develop their strategy to create some sort of virtual government, completely controlled by the U.S. oligarchy, to justify a foreign invasion, looting our people’s riches, stealing our assets, our gold in England, CITGO in the United States and Monomeros in Colombia, two companies that belong to all Venezuelans. Theirs is a strategy to prevent Venezuela from developing a life, to achieve its goals with complete normality. On February 23, they wanted to Balkanize the country, separating its fruitful half-moon, launching attacks in (western state of) Tachira, and a criminal action in (southeastern state of) Bolivar to disguise the invasion and start the occupation of our country, under the shameful false flag of humanitarian aid.”

This strategy has been defeated by the power of an organized and aware population, that defended their borders and sovereignty with their Bolivarian National Armed Forces through civic-military unity. “But they did not give up,” Blanca added. “They organized an electrical strike on March 7, trying to sabotage all production processes, trying to subjugate us, to push us into a civil war and thus justify foreign interference. They have been defeated once again through the organization, awareness, and unity of people, government and party: a unity taught us by Chavez and which has been strengthened by Nicolas Maduro during these years and which is prevailing even today. The unity through which our working people, our commune people, together with the revolutionary government, defeated the military coup organized last April 30 by a puppet of the empire, backed by a servile administration in the United States.”

And then, Blanca said, it was the turn for international attacks, “They turned to false positives like those spread by (Colombian President Ivan) Duque at the U.N., accusing our homeland with false documents. But they were unmasked once again by people’s intelligence. I explain this to give you the context in which despite the economic war, with attacks to our currency and the terrible speculative mechanism aimed at pushing us to despair, our President is defending the achievements of the Revolution and Chavez’s legacy. Nicolas Maduro, who works miracles and also turns stones into bread, asked us to radicalize the municipal offensive, people’s productive battle: only the people will save the people.”

The Minister went on to explain the merit of the Congress of the Communes, “Municipal offensive is an exercise of full democracy, participation, a process of permanent training for people’s power, aimed at transforming the entire financial system, creating a financial municipal circuit, the municipal city, a cycle that should finish by 2021 when we will be celebrating the bicentennial anniversary of the Battle of Carabobo, which sealed Venezuela’s independence.”

Resuming and raising again the spirit of the directional change, the Minister explained, means fighting bureaucracy and inefficiency, taking the counteroffensive to a world stage to defeat the economic war instead of standing still before the local context. To date, Blanca detailed, there are 3,200 rural and urban communes in the country. They shall unite in a permanent and planned productive effort, building a new architecture and a new economic system to obligate bureaucratic structures to change. And this challenge is going to be successful, Blanca concluded, because “we are not governed by a traitor such as Lenin Moreno (in Ecuador) or a businessman like Mauricio Macri (in Argentina) but by a President of the People, Nicolas Maduro.”