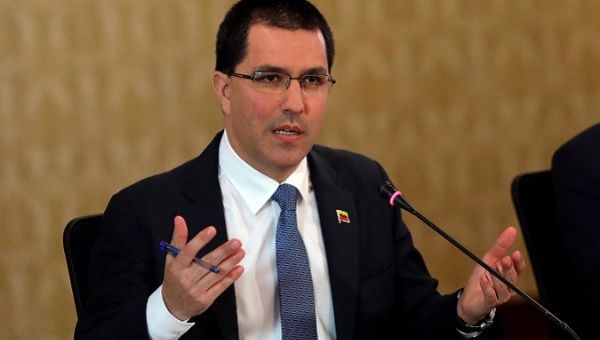 “Today the Trump administration responds with desperation against us. The TRUTH hurts!” Jorge Arreaza tweeted regarding the U.S. sanctions against him.

The United States Treasury sanctioned Venezuelan Minister of Foreign Affairs Jorge Arreaza Friday, who then condemned the move and denounced what he described as “criminal” acts by the U.S. against the Latin American country.

The Office of Foreign Assets Control, a financial intelligence and enforcement agency within the Treasury Department, have sanctioned the Venezuelan foreign minister and Judge Carol Bealexis Padilla de Arretureta.

RELATED CONTENT: In What Countries do the Suspects of the Electrical Sabotage Hide?

“There are reactions that confirm that we are on the right path and give us more STRENGTH to fight. Yesterday at the UN, we irrefutably denounced the US criminal blockade against Venezuela. Today the Trump administration responds with desperation against us. The TRUTH hurts!” Arreaza tweeted in reponse to the treasury’s move.

At a United Nations meeting Thursday, Arreaza said that the unilateral sanctions imposed by the United States are not against officials, but against the Venezuelan general public.

“The sanctions are not against officials — they are against the people, against our economy,” reiterated the minister.

Arreaza reported that in the coming days President Nicolas Maduro will announce the creation of a registry to “keep track of the effects our people are suffering as a result of the blockade” imposed by the U.S. President Donald Trump’s administration.

Some reactions confirm that we walk the right path. It gives us more STRENGTH for the struggle. Yesterday, we denounced the US criminal blockade against Venezuela at the UN. Today, the Trump administration responds with desperation against us. TRUTH hurts! https://t.co/MuTdjfwPIb

In a statement released Friday, Treasury Secretary Steven T. Mnuchin made the claim that, “the United States will not stand by and watch as the illegitimate Maduro regime starves the Venezuelan people of their wealth, humanity, and right to democracy.”

Despite his statement, a joint study released Thursday by world-renowned Columbia University economist, Jeffrey Sachs, and Mark Weisbrot from the Center for Economic and Policy Research (CEPR), revealed that, in fact, it’s the U.S. sanctions on Venezuela that are depriving the nation’s population of food and medicine.

The report, ‘Economic Sanctions as Collective Punishment: The Case of Venezuela’ shows that over US$15 billion in Venezuelan government assets are locked up due to the U.S.’s sanctions preventing the nation from exporting and importing, including food and medicine. Since 2017 alone, an estimated 80,000 people with HIV have not had access to their antiretroviral treatment and another 4 million with diabetes and hypertension cannot obtain their insulin or cardiovascular medicine.

“This Administration stands with the Venezuelan people, and alongside an international coalition committed to holding accountable those who are responsible for Venezuela’s tragic decline,” stated Mnuchin Friday.

Sachs and Weisbrot contest such U.S. claims in their study pointing out that “the sanctions are depriving Venezuelans of lifesaving … medical equipment, food and other essential imports,” warning: “Venezuela’s real GDP shows an astounding and unprecedented decline of 37.4 percent in 2019 (and) imports of goods are projected to fall by 39.4 percent.”

The experts project that this scenario caused by the sanctions, “illegal under international law,” will force “more than 1.9 million people are expected to leave the country, and the impacts on human life and health … are expected to be even more severe than what happened last year.”