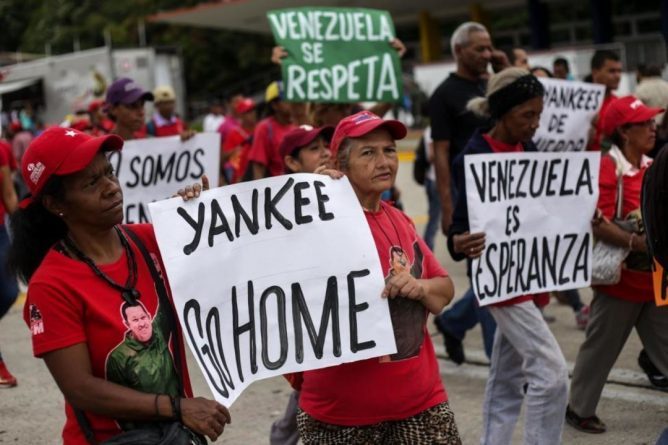 On Sunday morning March 10, electricity was largely restored in Venezuela after the sabotage of its power grid that began on March 7. Even in the midst of the crisis, Bolivarian Venezuelans with their elected president, Nicolás Maduro Moro, mobilized in a massive united anti-imperialist demonstration on March 9.

The U.S. government bears as much responsibility for these new hardships in Venezuela as was caused by its targeted bombing of Iraqi electric infrastructure in 1991.

Of course, no U.S. Air Force bombs rained down on Venezuela’s Guri hydroelectric complex. None were needed to inflict more economic suffering on the Bolivarian people. Equally devastating and lethal methods are now in imperialism’s toolbox, including cyber weapons and the cruel reality hidden behind the innocuous and nonthreatening term “sanctions.”

In a March 9 article posted during Venezuela’s power outage, Forbes contributor and Senior Fellow at the George Washington University Center for Cyber & Homeland Security Kalev Leetaru wrote: “In the case of Venezuela, the idea of a government like the United States remotely interfering with its power grid is actually quite realistic. Remote cyber operations rarely require a significant ground presence, making them the ideal deniable influence operation. Given the U.S. government’s longstanding concern with Venezuela’s government, it is likely that the U.S. already maintains a deep presence within the country’s national infrastructure grid, making it relatively straightforward to interfere with grid operations.”

On March 7, U.S. Sen. Marco Rubio’s tweets seemed to know a lot about the power outage, before some events could have even occurred. In a TeleSUR video, Venezuelan Minister of Communication and Information Jorge Rodríguez said that the automated control system at the Guri hydroelectric plant had been cyber attacked. Rubio couldn’t have known that the backup generators didn’t work unless he also knew the target. Guri generates 70 percent of Venezuela’s electricity.

However, the Venezuelan grid is an ongoing target in the U.S.’s war for oil. For example, on Sept. 1, 2018, EFE.com reported 12 arrests for damaging electric substations in the Zulia province.

In the article, the minister of electric energy, Luis Motta Domínguez, said: “It grabs my attention that a well-known opposition leader was here yesterday, calling on Venezuelans to insurrect and saying that the insurrection will begin in Zulia, and that the substations exploded that same night.”

Sanctions and terrorism of the dollar

The U.S. economic war on Bolivarian Venezuela began with the election of President Hugo Chávez in 1998. Chávez brought the most oppressed and marginalized out of the shadow of the oil oligarchs, registered everyone to vote and began a constitutional transformation recognizing the rights of the majority working class, women, Indigenous and African-descendent peoples. The U.S.-engineered coup attempt in 2002 was defeated and an oil lockout followed, because Chávez was using the income from the natural wealth of Venezuela for the majority instead of the wealthy few.

When U.S. political figures say President Maduro uses Venezuela’s oil income and other wealth for his “friends,” the friends are the majority of Venezuelans, as it was with Chávez.

The decline in oil prices combined with U.S. restrictions that block purchase or sales on the international markets and threaten to fine any bank or corporation in any other country for granting credit to Venezuela for purchase of food or medicine or equipment parts has created the economic crisis. Thus, the creators of the crisis are really hoping to take control of and profit from Venezuela’s vast oil, gold and coltan resources.

A PressTV correspondent in Caracas reported on March 9 that a woman at an opposition rally called out for Trump’s intervention. He characterized it as “calling the arsonist to put out the fire.” U.S. intervention does not bring prosperity or peace, but the same kind of devastation seen in Iraq, Afghanistan, Libya and Syria.

Who are Guaidó’s friends?

As Greyzone.com analyzed: “In other words, Guaidó plans to implement the neoliberal capitalist shock therapy that Washington has imposed on the region for decades.

“Using funding from U.S.-dominated international financial institutions like the International Monetary Fund (IMF), the Venezuelan coup leader seeks to adopt an aggressive ‘structural adjustment’ program, enacting the kinds of economic policies that have led to the preventable deaths of millions of people and an explosion of poverty and inequality in the years following capitalist restoration in the former Soviet Union.”