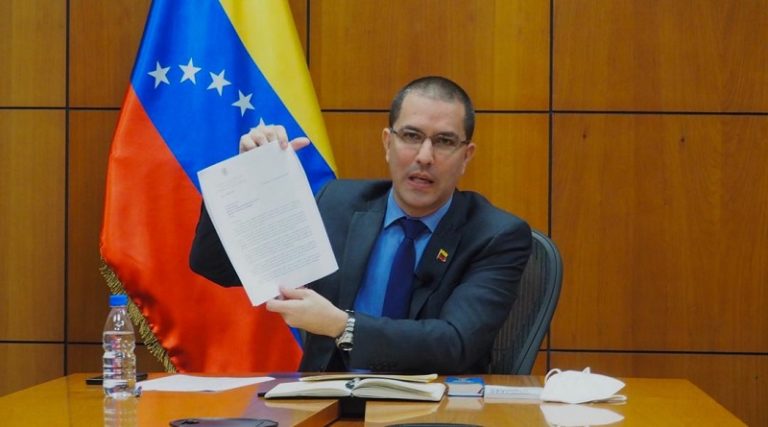 This Tuesday, the Foreign Affairs Minister of Venezuela, Jorge Arreaza, denounced the mistreatment and torture that the Special Envoy of Venezuela, Alex Saab suffers during his arbitrary detention in Cape Verde.

“Everything has been verified by his lawyers. It is a clear violation of his human rights,” he said before the African Union and the government of Cape Verde.

RELATED CONTENT: Alex Saab: “I was Tortured to Testify Against President Maduro and Sign my Voluntary Extradition to the US”

“We demand that Special Envoy Alex Saab be allowed an immediate visit by a forensic doctor, as well as an attorney from the Public Ministry and our ambassador to Cape Verde. So far these visits have not been authorized. It is a fair and appropriate request,” said Arreaza through his twitter account.

In this sense, Arreaza urged the Cape Verdean authorities “to grant a humanitarian measure (to Saab), which allows him to be in house arrest due to the notorious deterioration of his health.”

On June 14, Venezuela, through a statement, denounced the arbitrary and illegal detention of the Venezuelan citizen Alex Nain Saab by the International Police (Interpol) when he was in transit in the Republic of Cape Verde, an action directed as part of the aggression, blockade and siege of the United States (USA) government against Venezuela.

Alex Saab has been key for the Venezuelan government to procure — during the US blockade — international supplies for the massive state funded food program known as CLAP. The CLAP program delivers one box of almost free food to more that 6 million Venezuelan households every month.

Meanwhile, his lawyers stressed that he is the victim of an US strategy to attack Venezuela politically. “It is the obligation of a country that captures someone, to take care of the health of that person,” said Saab’s defense assisted by the famous Spanish lawyer and former judge, Baltazar Garzon.

One of Saab’s defense lawyers, Rutsel Martha, stressed that his client is the victim of a political dispute between two countries. “The charges are fabricated, they are not genuine and that is why we believe this is a political issue.”

In addition, he appealed for his state of health, adding that the government of Cape Verde should provide house arrest in a residence on the island. In any case, he affirms, “it would not be a house arrest in Venezuela, it would be a measure that would be taken here in Cape Verde.”

“It is the obligation of a country that captures someone to provide care for the health of that person and that is why we must take into account the health situation of Alex Saab at this time,” he stressed.