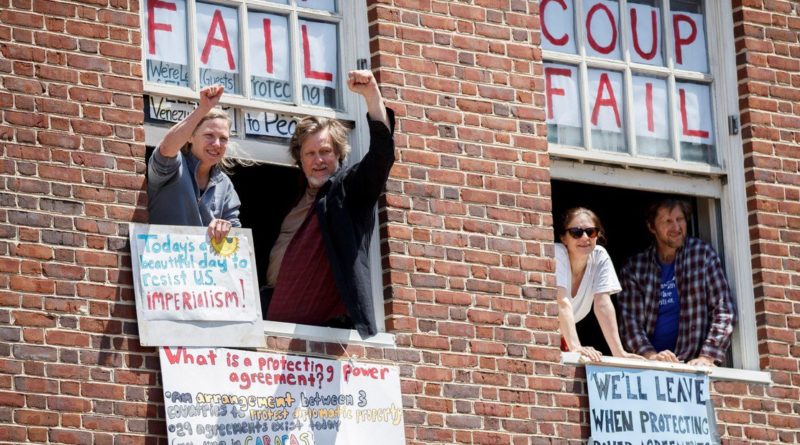 Judicial proceedings are taking place in DC federal court where the judge has ruled inadmissible the question whether the democratically elected Nicolás Maduro or the Trump-chosen Juan Guaidó is the legitimate president of Venezuela.

Like an emperor of yore appointing regents of vassal states, US President Trump tapped then recently seated head of the suspended Venezuelan National Assembly Juan Guaidó as president of Venezuela on January 22, 2019. The US has viewed the dominions south of the Rio Grande as the empire’s “backyard” since the 1823 Monroe Doctrine.

The 35-year-old Guaidó thus became one of the world’s youngest chiefs-of-state in the eyes the US government and its allies. The United Nations and the vast majority of sovereign states continued to recognize the democratically elected Nicolás Maduro as president of Venezuela.

Guaidó had never run for the presidency of Venezuela and had never served as president. He was not a member of a major Venezuelan political party nor even in the top leadership of his own far-right party. At the time of his self-declaration as president and anointing by Trump, Guaidó was unknown to 81% of the Venezuelan population.

RELATED CONTENT: If Venezuelan Embassy Protectors Are Retried, Jury Should Hear About US Crimes

But Guaidó had one outstanding qualification for the position of puppet president: he had been groomed as a US security asset.

Last year Guaidó staged three unsuccessful coup attempts in Venezuela against the elected government. On January 5, instead of reelecting Guaidó president of the National Assembly, the opposition chose another opposition politician, Luis Parra, removing the last fig leaf of Guaidó’s legitimacy. Guaidó then scurried to an opposition newspaper’s office and was unanimously reelected by a phony assembly that had already been staged in anticipation of his defeat in the real assembly.

While Guaidó’s domestic support in Venezuela fizzled, the puppet president went on an international tour posing for photo ops with US-allied heads of state. On February 4, Guaidó made an appearance at Trump’s state of the union address, where he was given an enthusiastic standing ovation by Republicans and Democrats alike.

Guaidó, who has called for even more punishing US sanctions on his own people, did not get nearly as friendly a reception when he returned to Venezuela on February 11. Guaidó was called a traitor by angry workers from the state airline, Conviasa, that had just been sanctioned by Trump.

Back in April, North American solidarity activists formed a collective to prevent the Venezuelan embassy in Washington from being taken over by Guaidó’s collaborators. The Embassy Protectors, as they called themselves, defended the embassy with the permission of the Venezuelan government and pursuant to international law.

At first, the Embassy Protectors were able to come and go into the embassy and hold educational meetings. But soon the embassy was surrounded by antagonistic crowds who violently prevented food from being delivered to those inside. The DC police made no effort to curb the hostile opposition from assaulting supporters, while the police attacked supporters trying to deliver food.  Gerry Condon, then national president of Veterans for Peace, was among the supporters tackled by police while delivering food.  He was thrown to the ground, bloodied, and then charged with misconduct (later dropped).

The government further tightened the screws on the Embassy Protectors. Water and electricity were illegally cut off at the embassy, while the police allowed protectors to leave but not reenter. Eventually the collective of some 70 human rights activists at the embassy was reduced to the “final four”: Margaret Flowers, Kevin Zeese, David Paul, Adrienne Pine. They rationed what little food and water they had and held out for 37 days.

The Secret Service expelled the final four on May 16, charging them with “interfering with the protective functions” of the State Department. They went on trial on February 11, facing possible stiff penalties including fines and imprisonment.

While the Embassy Protectors were defending themselves in the DC court for upholding the Vienna Convention on Consular Relations – information the judge ruled the jury would not be allowed to hear – the Venezuelan government charged at the International Criminal Court in The Hague that US sanctions against Venezuela constitute crimes against humanity. Tens of thousands of Venezuelans have perished from lack of medicines and food due to the US-imposed unilateral coercive measures.

While the Embassy Protectors were in the embassy with the permission of the elected government of Venezuela and acting on legal advice that their actions were lawful, the US and Venezuela were negotiating a mutual protecting power agreement, which would have resulted in Switzerland protecting the US embassy in Caracas and Turkey protecting the Venezuelan embassy in DC. The Embassy Protectors told the police they would leave voluntarily once that agreement was reached. But the federal judge ruled that the jury could not be told any of this.

Despite the government’s attempt to railroad the Embassy Protectors, the jury did not convict. The 4-day trial ended in a hung jury and declaration of mistrial. Retrial hearings are currently being held, the lawyers from both sides are talking, and they anticipate an agreement by the next hearing set for March 6.

The mistrial indicates that the government’s case is severely compromised. This is a victory for the Embassy Protectors and international law, and a setback for the illegal US bipartisan drive for regime change in Venezuela.

Embassy Protector David Paul commented: “This charge on us is just another attack on dissent. Whichever way it turns out, we need to build from it to continue our voice against the policies of empire.”

Roger D. Harris is with the Task Force on the Americas, a human rights group working in solidarity with the social justice movements in Latin America and the Caribbean since 1985.