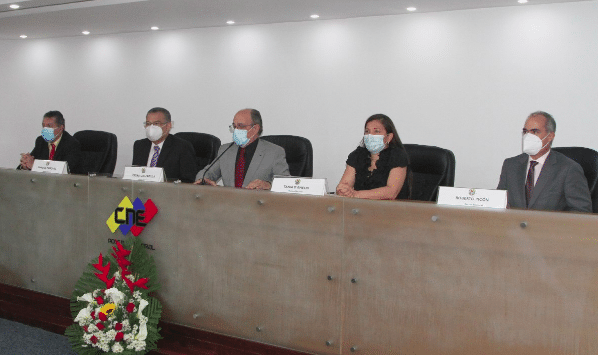 At noon on Wednesday, May 5, the new board of directors of Venezuela’s National Electoral Council (CNE) was installed, in a session in which they assigned the responsibilities that each rector will assume.

Rector Pedro Enrique Calzadilla Pérez reported that during the meeting held by the new electoral authorities, they decided who will be responsible for the various tasks within the CNE.

“We are the result of an agreement. This governing body is the result of a historic national agreement of the country’s political [and[ social forces, to redirect Venezuela to political stability in adherence with the dynamics demanded by participatory and protagonist democracy, that has the electoral route as one of its main tools,” said Calzadilla.

Who will make up the board of directors of the CNE?
During the inaugural meeting, it was decided which of the rectors appointed by the National Assembly this Tuesday would assume the presidency and vice-presidency of the electoral body and of its subordinate entities.

• Rector Pedro Calzadilla was appointed as the new president of the National Electoral Council.
• Enrique Márquez was elected as vice president of the electoral body.
• The National Electoral Board will have as president Tania D’Amelio, and will include Roberto Picón and Carlos Quintero.
• The Political and Financing Commission was chaired by CNE Vice President Enrique Márquez, and will include Tania D’Amelio and the appointed rector Conrado Pérez.

The new president of the CNE pointed out that this Thursday the installation and the first meeting of the subordinate committees will take place. This is so that in the coming days new information can be generated regarding the elections that are expected in the country.

Calzadilla stressed that this new CNE was chosen by an agreement of the National Assembly, which opened the doors to various democratic expressions of Venezuelan society.

RELATED CONTENT: US Affirms That With Its Allies, It Will Pressure Venezuela to ‘Return to Democracy’

“Many are the tasks that we will start from today. We are diverse and different here. We will consider all the proposals, we will confront our ideas, and we will make our decisions subject to our laws, while listening closely to the dynamics and political sentiment of the country,” said the rector.

Who are the new rectors?
• Pedro Calzadilla: Historian, graduated from the Central University of Venezuela (UCV), and received a master’s of science from the Sorbonne University (France). He was Minister of Culture from 2011 to 2013 and Minister of University Education from 2013 to 2014. In 2007 Calzadilla co-founded the National History Center, and he is also director of the Simón Bolívar Study Center.

• Tania D’Amelio: Deputy to the National Assembly for Vargas state between 2000 and 2005, and re-elected for the period 2006-2010, member of the Family, Women and Youth Commission, and presided over the permanent sub-commission on Youth Rights. In 2009 she was appointed rector of the CNE for the period 2010-2016, and her term was renewed for 2016-2023. Lawyer from Santa María University, specialized in tax law.

• Alexis Corredor: Professor of history and geography, graduated from the Pedagogical University Institute of Caracas (UPEL). In 2017 he was elected from the list of the public administration workers sector as a deputy for the National Constituent Assembly (ANC), and in that position he served as vice president of the ANC Human Rights Commission. He also served as director of technical support for the office of the Minister of Education.

• Enrique Márquez: Leader of the party A New Era, of the so-called G4 anti-Chavista coalition, until 2018. He is an electrical engineer, graduated from the University of Zulia. Deputy for the state of Zulia for the periods 2000-2005, 2011-2016 and 2016-2020. He assumed the vice-presidency of the Parliament from 2016 to 2017 as a result of the internal agreements by the former Democratic Unity Table (MUD).

• Roberto Picón: An electronic engineer, he was part of Súmate [join us], an organization founded by María Corina Machado, and of the NGO Ojo Electoral [electoral eye]. He was Coordinator of the MUD Technical Support Team and owns a company, Consein, with international visibility. He was detained by the Venezuelan authorities in 2017 for conspiracy against the elections of the National Constituent Assembly, and released a few months later under special conditions.