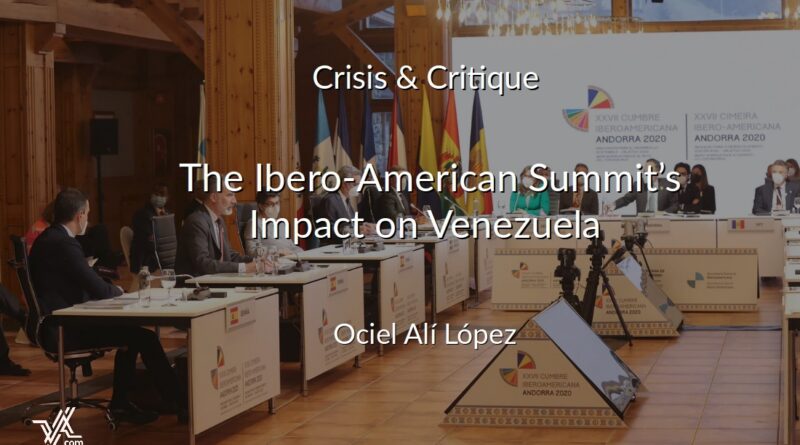 The Ibero-American Summit is an event that brings together the presidents or senior representatives of Latin America, Spain, Portugal and Andorra. On April 21, the XXVII meeting was held in Andorra, although most participants attended virtually.

The main theme was “innovation for sustainable development,” but for obvious reasons it was the Covid-19 pandemic that ended up taking center stage.

The event’s first important consequence as far as Venezuela is concerned was the fact that the country was not the main focus, as it had been until now in different international spaces where many of these countries meet.

This time, Venezuela was mentioned by only four presidents who complained, for a few seconds, about the participation of the Nicolás Maduro government through Vice President Delcy Rodríguez (except Colombian President Iván Duque, who went on for a while).

But the most important thing was not what happened at the summit, but what didn’t.

Post-Trump diplomacy
As we know, Trump’s last years were of open conflict against the Venezuelan government. In 2019 an “interim administration” was appointed, whose president, the then Deputy Juan Guaidó, was recognized by most of the countries of Europe, Latin America and North America.

Of the 22 countries that attended the recent summit, 18 had taken the bait with the “interim administration” and stopped recognizing Maduro’s presidency. It is therefore curious that at the summit only four protested the presence of an administration that many of them do not officially recognize.

It is logical to think that a de facto recognition of Maduro’s presidency, at least in most Ibero-American countries, took place on April 21. As a result, the break with the Guaidó “presidency” was formalized, something that had already happened with the European Union but not with Central and South American countries.

The most important thing was what didn’t happen
Upon finishing the summit, one would have expected the US government to question Venezuela’s invitation, but this did not occur either.

Just as Washington preferred to ignore the issue, a number of institutions, media outlets, and governments that could have attacked the summit, as well as the Ibero-American general secretariat that organizes it, preferred to remain silent and ignore the implicit recognition of the Maduro government.

Central actors such as King Felipe of Spain, United Nations Secretary-General António Guterres and the governments of some 17 European and American countries preferred to use their speeches to focus on the coronavirus and the current unequal distribution of vaccines.

Important media outlets such as Euronews, BBC or DW which led the charge against Maduro and insisted on the so-called Venezuelan humanitarian crisis during 2019 and 2020 paid no attention to the debate around Venezuela this time, or saw it as a minor controversy.

Even the presidents of Ecuador and Uruguay, who together with Chile and Colombia raised the Venezuela issue, were not as forceful as before. They also stopped calling Maduro a dictator and rather briefly concentrated on asking the government to open the “democratic floodgates,” before using the bulk of their time to talk about the pandemic. It should be remembered that in February 2019, [Chilean President] Sebastián Piñera went to the Colombian border with Venezuela to support the insurrectionary call of the Guaidó “interim presidency.” At this summit, despite his clear stance of wanting to exclude Venezuela, he assumed a much more balanced position by not asking for military coups or foreign invasions and not recognizing the “interim presidency.”

Basically, the most visible thing, compared to the diplomatic events of recent years such as those of the Organization of American States or the Lima Group, was that none of these countries explicitly expressed their recognition of Guaidó’s “interim administration.”

The Trump administration’s policy on Venezuela, which included threats of a military invasion and a direct and ferocious economic and diplomatic attack, has proven ineffective. Governments have preferred to be more pragmatic this year. They prefer to address the reality: that the country is ruled by Maduro and that the Guaidó “interim presidency” was nothing more than an externally motivated drill that in no way changed the correlation of internal forces and did not even crack the current government’s stability.

A stunned opposition
The summit has also stunned the opposition, which has not responded from the “interim government” but rather through individual politicians’ protests. Guaidó has been as silent about the Maduro government’s participation in the Ibero-American summit as Washington and the entire mainstream media.

Leopoldo López, the strategic leader of the radical opposition, and Julio Borges, Guaidó’s inert chancellor, have responded with personal protests. These protests, however, were very subtle as both are guests of countries that are silent on the issue or that led to this new international situation.

All this radical opposition counted on was international support and now that is in question. The strategy of trying to take the country by force such as the April 30, 2019 putsch attempt or military invasions like the one Guaidó, Duque and Piñera attempted in February 2019, and with which they constantly lobbied Trump, is frankly defeated.

The interim show is over. The way Venezuela is starting to be addressed in international forums, documents and meetings can be considered as post-Trumpist, which does not mean it is without friction, but it is less aggressive. This situation leaves Venezuela’s neighboring governments, which bet on an armed conflict, especially Colombia, the only one that maintained the Trump narrative during the event, badly positioned.

A new approach to Venezuela?
The most polished speech around Venezuela was from Spanish head of government Pedro Sánchez who said: “It is clear that there are different opinions (but) through dialogue and listening, agreements may be reached.”

It should be noted that Spain seeks to generate a leadership role in the region. Perhaps that is why the Spanish representative announced the donation of 7.5 million vaccines to Latin America. Spain also pledged to raise the summit’s main complaints (the unequal distribution of global vaccines, the relegation of Latin America as one of the regions worst hit by coronavirus, the weaknesses of the UN COVAX vaccine delivery mechanism, and other pandemic-related unrest and the unbalanced global response) to higher international organizations.

This desire for leadership has been consistent from Spain. For this reason, it has developed a policy of openness with the Cuban government and taken the opportunity to detach itself slightly from the EU’s position of not recognizing Guaidó, accelerating the steps required to stabilize its relationship with Venezuela and the region. Such measures have been pushed through from its own leadership and not from the US Republican mandate.

This geopolitical shift will also impact on the internal dynamics of Venezuela, both in the opposition and the government, an issue that we will discuss in an upcoming delivery of Crisis & Critique.