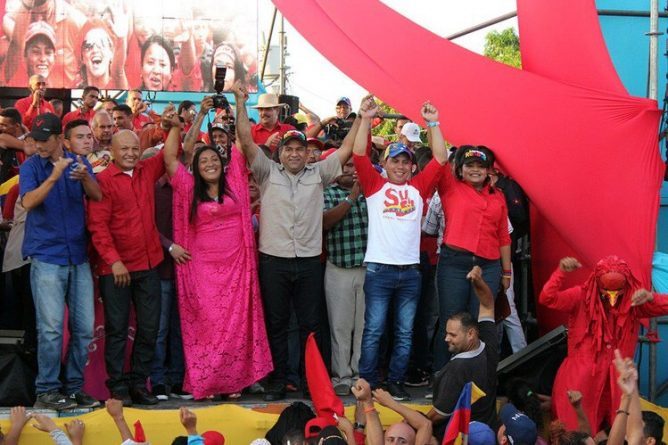 In its first official bulletin, Venezuela’s National Electoral Council (CNE) revealed that after tallying 92.3 percent of all votes the PSUV had won 591 of the 623 municipal council seats where results were deemed irreversible. Further declarations from the CNE indicated a similar trend in the remaining seats, which were announced during the course of Sunday night and Monday.

In response to the news, President Nicolas Maduro congratulated his team, urging them to get to work to solve widespread problems in transport and public services.

“I congratulate the elected councillors in this marvellous electoral session of December 9. I invite them to put themselves at the forefront of the difficulties which our people suffer from so as to advance towards the construction of a prosperous future for our homeland,” he declared, describing the results as a “popular victory.”

Maduro also highlighted that this was Venezuela’s fifth election in 18 months, the ninth since he became president, and the twenty-fifth since 1998.

In total, 4,900 councillors were due to be elected across the 335 municipalities of the country, 1,073 via first-past-the post nominal votes, 685 by list, and 69 indigenous representatives. Fifty-one political organisations participated and 20.49 million Venezuelans and resident foreigners were eligible to vote at the 14,382 polling stations.

According to initial CNE figures, participation for this low-key election was 27.4 percent, well below the levels the country is used to seeing in past years.

However, despite being below the 46 percent participation in this past May’s presidential election, the figure compares favourably with previous local council elections.

In 1995, 43 percent of the population voted for councillors in Venezuela, whilst in 2000, participation was 23.8 percent. The last comparable election of this type was in 2005, when 32 percent voted. In 2013, when, apart from local councillors, mayors and regional legislators were also chosen, participation was higher at 58.4 percent.

As with previous elections, the Venezuelan opposition was not unanimous in its response to the vote, with four of the principal opposition organisations – First Justice, Popular Will, Democratic Action, and A New Era – claiming that the elections were fraudulent and discouraging participation. These parties were unable to participate in the process, having opted not to undergo the legal procedures to revalidate their party status, following boycotts of last December’s mayoral elections and May’s presidential vote.

Pro-abstention parties began claiming fraud early in the day citing government social programs and PSUV organisational logistics points to back up their claims. “In Venezuela there were no elections, nor is there a president-elect. Nicolas Maduro is a dictator…” tweeted the hard-right Popular Will party.

Meanwhile, a plethora of other opposition parties did participate, including Progressive Advance, MAS and Social Christian COPEI, which battled to fill the vacuum created by the other parties’ absence.

Parties, including the Pentecostalist Hope for Change, urged voters to participate. “If we don’t vote, we can’t complain afterwards… We have to come out and vote massively and defend our rights,” tweeted Hope for Change leader and ex-presidential candidate Javier Bertucci.

Sunday’s election produced a number of surprising results, in part due to the partial boycott by certain sectors of the right-wing opposition, deep internal divisions between those that did participate, as well as a number of inter-Chavista contests across the country.

In the traditional opposition bastion of Baruta in Miranda State, the PSUV took control of the municipal chamber, winning nine of eleven seats and essentially tying the hands of the right-wing opposition mayor.

A similar picture was seen in the opposition strongholds of Libertador municipality in Merida State, San Cristobal in Tachira State, and Naguanagua in Valencia, Carabobo State. Nonetheless, right-wing parties managed to retain control of several important bases such as Chacao municipality in Miranda State and La Lecheria in Anzoategui State.

In other regions, however, the PSUV were greeted with shock defeats at the hand of their Chavista allies who threw their weight behind a number of candidates from the communal sector, often in protest at PSUV bureaucracy and top-down practices.

In Lara’s Simon Planas municipality, home to El Maizal commune, community leaders backed by the Homeland for All party (PPT) celebrated a 3-point victory over PSUV candidates. The victory comes exactly a year after El Maizal leader Angel Prado, running on the PPT ticket, won over 57 percent of vote in last December’s mayoral election only to have his votes handed to defeated PSUV rival Jean Ortiz on a technicality.

Similarly, in Libertador municipality in Monagas State, where Communist-backed Regulo Reina was equally denied victory in the 2017 mayoral contest, Communist candidates scored a remarkable victory over the ruling party, winning 45 percent of the vote, some five percent more than the rest of the pro-government coalition.

However, in other regions, the PSUV was able to consolidate its political position.

In Merida State, the three pro-government candidates followed by Venezuelanalysis were all victorious, and there was also a win for the PSUV in Tulio Febres Cordero municipality, site of the recent assassination of Communist leaders Luis Fajardo and Javier Aldana. The PCV had split from the alliance in this sector in protest of a perceived government failure to investigate the violence.

Elsewhere, communal candidates were also defeated by the PSUV electoral machine in the symbolic 23 de Enero sector of Caracas, as well as in Portuguesa and Apure states where communal and alternative Chavista sectors had presented independent candidates.

Members of the international electoral accompaniment mission, which included representatives of the Council of Latin American Electoral Experts (CEELA), held a press conference Monday, in which they highlighted the advanced technological nature of the electoral process, stressing that it took place in an environment of calm across the country.

“It is important to highlight that Venezuela and Brazil are the only countries with an electronic voting system, in some countries they have tried to change but it hasn’t been fully achieved (…) electorally, Venezuela has many virtues and we would like to pass these on to other regions,” stated the CEELA spokesperson.

The team also praised the numerous audits undertaken as part of the electoral process, claiming, “In no Latin American country does there exist so many audits.”

Finally, they recommended a longer campaigning period and “better levels of information regarding the relevance of the role of municipal councillors” in order to combat low turnout levels.

The only major incident recorded Sunday was in the Gran Sabana municipality of Bolivar State in the east of Venezuela, home to the picturesque Canaima village and Angel Falls.

Following the death of one of the indigenous community members the previous day in a reported police confrontation in connection to illegal mining in the national park, local indigenous leaders requested that the vote be suspended.

The CNE later announced that they will evaluate a new date for the elections to be rescheduled.