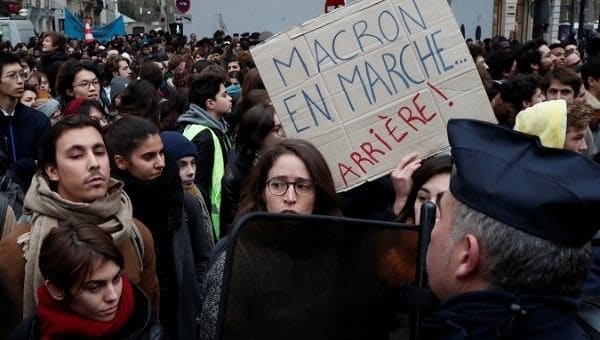 Their anger stems from Macron’s plan to change the end-of-school exams known as baccalaureate or ‘bac.’ Their grades, instead of being based purely on the results of the final exams, will incorporate marks and test results in a new bac obtained throughout the final two years of school.

“We will continue protesting until our demands are met,” Jules Spector, head of the Lyceen Independent and Democratic Federation (FIDL) union, told France 24. “The government has made no gestures towards us,” he added. “On the contrary, it is obvious they are waiting for the end of the term to slow down our movement.”

The administration also wants to replace broad subject areas of science, literature or social sciences with specific courses that students have to choose alongside standard curriculum.

The students are also demanding a repeal of a reform passed last year which introduced stricter criteria for universities, which they say means a broadening of inequality between rich schools and poorer schools.

“There are many reasons why we’re protesting but our anger comes from the same place as the yellow vests and the government has made some really destructive reforms. It’s in our interest to be on their side,” president of the UNL student union Louis Boyard told French media.

France’s President Emmanuel Macron Monday announced minimum wage raises for the poorest workers and tax cuts for pensioners in further concessions meant to defuse weeks of protests that have challenged his authority.

The leader of leftist La France Insoumise Jean-Luc Melenchon said that the president’s address was full of fallacies since he started by scolding people for protesting.

“Emmanuel Macron thought he could hand out some cash to calm the citizen’s insurrection that has erupted,” he said criticizing the speech.