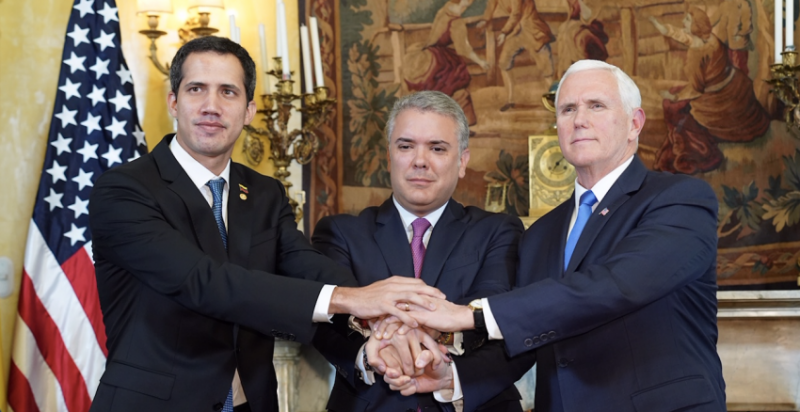 The recognition by some states of the self-proclaimed government of Juan Guaidó has generated an unprecedented political and legal controversy. This is a clear violation of international law that started with the contravention of the first chapter of the United Nations (UN) Charter that establishes the goals and principles for a peaceful coexistence between countries.

In the theory of international law, premature recognition may constitute an illicit interference in the internal affairs of the affected state. It can also be considered as a hostile act.

The 1933 Montevideo Convention on the Rights and Duties of States, established that the requirements for a state to be recognised are territory, government, population and the capacity to enter into relations with other states. These elements serve as the basis for the theory of contemporary international law.

It is clear that the self-proclaimed government of Guaidó does not meet the minimum requirements for recognition, moreover, this constitutes a political action outside existing legal and customary boundaries. The public institutional framework in Venezuela has not collapsed, there is a constitutional President, four branches of government, in addition to the subordination of the military and the police.

Taking these elements into account, there has been a premature recognition, which, in anticipation of uncertain political outcomes and in support of a government without any power to govern, has contravened fundamental principles of international law. This recognition is therefore an action that can be framed as an international crime.

The contravention of international law is mostly carried out through the interference in the internal affairs of Venezuela. Moreover, this interference becomes more serious due to the threats against the integrity of the state.

RELATED CONTENT: “US Sanctions on Venezuela Have Caused the Death of More Than 40 Thousand” – Study

The UN Charter defines in Article 2.4 that, “All members shall refrain in their international relations from the threat or use of force against the territorial integrity or political independence of any state, or in any other manner inconsistent with the purposes of the United Nations”.

The interference and unilateral coercion that has been exerted against Venezuela violates numerous treaties, including: the UN Charter; the Charter of the Organisation of American States (OAS); the Montevideo Convention on the Rights and Duties of States; the Convention on Duties and Rights of States in the Event of Civil Strife; the Rome Statute of the International Criminal Court; and UN General Assembly Resolutions 2625 (XXV) and 3314 (XXIX).

Recognition of Guaidó means supporting an attempted coup d’état in progress, which generates liabilities for the state that recognises him.

Guaidó proclaimed himself President, with US support, on January 23, fraudulently using article 233 of the Venezuelan constitution, which determines as causes of absence of the president: death, resignation, incapacities, abandonment and impeachment. It is clear that none of these causes has occurred. Moreover, if any of these took place, the article determines that a new election must be carried out within 30 days.

The 30 day period expired on February 5, and to maintain the status of self-proclaimed president, Venezuela’s opposition-controlled National Assembly approved a document entitled “Statute governing the transition to democracy to restore the validity of the Constitution of the Bolivarian Republic of Venezuela”.

By doing so the assembly is seeking to assume powers over the constitution and above the remaining four branches of government, without the prior approval of the Venezuelan people, as established by the constitution.

Given the fact that the National Assembly does not have sufficient support from the Venezuelan people nor the Armed Forces, the document allows it to request foreign military intervention, in order to maintain the de facto government indefinitely.

International law and legal doctrine establishes that one of the qualifications for a state to be recognised is its ability to enter into relations with other states. Today, this capacity is fully exercised by the Maduro government.

The actions of those states that conduct regular international relations with legitimate Venezuelan embassies, but on the other hand recognise the self-proclaimed government of Guaidó constitute a contradiction and an affront to international law.

In a recent interview, Spanish foreign minister Josep Borrell acknowledged that Spain coordinates with the Venezuelan delegation appointed by Maduro. He also admitted that given Guaidó has no control over the territory or the administration and given it is not possible to have two ambassadors for the same country, Guaidó’s ambassador is considered a personal envoy.

He added, “When the process was initiated by the United States, it was not considered that Mr Maduro was going to show such resilience”.

This political miscalculation by several states creates an unparalleled legal precedent that only generates chaos in international relations. As the German Bundestag indicated: “Premature recognition represents a repudiation of the legitimate state authority by the recognising state, whereby the latter incurs tortious liability under international law, and also encounters serious reservations from a peace-building perspective”.

Guaidó’s appointed representatives are nominal and have no power to exercise state functions. Those countries that recognised him — under pressure from the US and under the assumption that with this recognition the Venezuelan government would collapse in a few days — are faced today with the harsh reality of not being able to accept these so-called “ambassadors”.

They are also facing growing criticism from their own legal experts, who expose their error, in contravention of international law, of recognising someone that Venezuelans do not recognise.

As the Spanish foreign minister pointed out, this is “an atypical situation that is not found in any manual of international law”, which, in reality means that this violation cannot be justified.

We hope that these developments will generate a legal and political reflection on the need to respect the principles of international law, and leading Europe especially to join the efforts of the Montevideo Mechanism [The process initiated by the Mexican and Uruguyan governments in February, which brought together countries supporting dialogue as the way to resolve political differences between the Bolivarian government and the opposition].

This can build the basis for a peaceful and consensual solution to the Venezuelan situation, without foreign interference and in full respect of the sovereignty and self-determination of the country.

[Jesse Chacón Escamillo is Venezuela’s ambassador to Austria and permanent representative to the United Nations.]