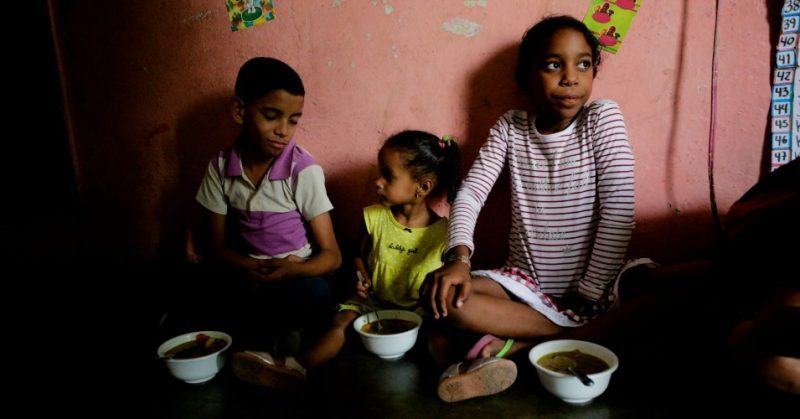 Two American economists warn that U.S. sanctions targeting Venezuela “are a death sentence for tens of thousands of people” and that the nation’s humanitarian crisis will worsen as long as the sanctions continue.

Since August of 2017, President Donald Trump has imposed sanctions that “have inflicted, and increasingly inflict, very serious harm to human life and health, including an estimated more than 40,000 deaths from 2017–2018,” write Mark Weisbrot and Jeffrey Sachs.

RELATED CONTENT: “US Sanctions on Venezuela Have Caused the Death of More Than 40 Thousand” – Study

Their paper—entitled Economic Sanctions as Collective Punishment: The Case of Venezuela (pdf)—was published Thursday by the Center for Economic and Policy Research (CEPR), and comes as Trump continues to back opposition leader Juan Guaidó’s effort to oust Venezuelan President Nicolás Maduro.

New Report: US #sanctions on #Venezuela are responsible for tens of thousands of deaths. “The sanctions are depriving Venezuelans of lifesaving medicines, medical equipment, food, and other essential imports,” said @MarkWeisbrot.https://t.co/uLpe6CJzqj pic.twitter.com/aIFN7RYQ6M

The broad sanctions Trump imposed in 2017 fueled a sharp decline in oil production that impeded the Maduro government’s ability to “import medicine, food, medical equipment, spare parts and equipment needed for electricity generation, water systems, or transportation,” and the U.S. president has ramped up economic pressure since offering his support to Guaidó earlier this year.

Overall, Trump’s sanctions have “exacerbated Venezuela’s economic crisis and made it nearly impossible to stabilize the economy, contributing further to excess deaths,” write Weisbrot and Sachs. “All of these impacts disproportionately harmed the poorest and most vulnerable Venezuelans.”

“These sanctions would fit the definition of collective punishment of the civilian population as described in both the Geneva and Hague international conventions, to which the U.S. is a signatory,” the economists say. “They are also illegal under international law and treaties which the U.S. has signed, and would appear to violate U.S. law as well.”

“The sanctions are depriving Venezuelans of lifesaving medicines, medical equipment, food, and other essential imports… Congress should move to stop it.”

Given the toll Trump’s economic policies are taking on Venezuela’s civilian population, Weisbrot, in a statement Thursday, called on federal lawmakers to take action.

“The sanctions are depriving Venezuelans of lifesaving medicines, medical equipment, food, and other essential imports,” he said. “This is illegal under U.S. and international law, and treaties that the U.S. has signed. Congress should move to stop it.”

As Sachs put it, “Venezuela’s economic crisis is routinely blamed all on Venezuela… But it is much more than that.”