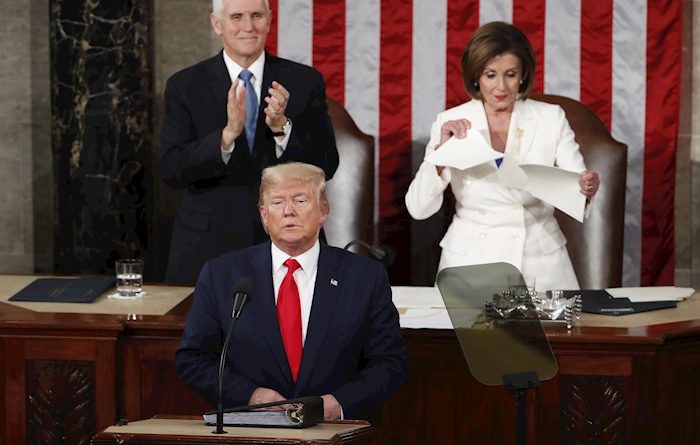 The Bolivarian Republic of Venezuela repudiates the new offensive and interfering statements issued on Tuesday by the President of the United States, Donald Trump, during his speech on the State of the Union (SOTU), in which he lashed out at the country and, by not recognizing the legitimacy of president, Nicolás Maduro, proclaiming as President the deputy Juan Guaidó.

The chancellor of the Republic, Jorge Arreaza, announced Venezuela’s response through a statement he read at the headquarters of the Ministry for Foreign Affairs, in Caracas. The text notes that Trump’s statements offend and disrespect the Venezuelan people, and states that Trump also reiterates contempt for peace and international law.

“The American ruler, in a delirious and arrogant speech, in which he seemed to resurrect the already expired “manifest destiny”, expressed and reiterated his disrespect for peace, for international law, for life and in particular, his disrespect for the sovereignty of Venezuela, counting on the complicity of those who are dedicated to selling the homeland in exchange for the humiliating crumbs that their boss throws at them,” the statement said.

In his annual State of the Union address, in which the president of the United States informs members of Congress about the state of the US, Donald Trump said he is “supporting the hopes of Cubans, Nicaraguans and Venezuelans to restore democracy”, and that “ the United States is leading a diplomatic coalition of 59 nations against the socialist dictator of Venezuela, Nicolás Maduro”.

He accused President Maduro of being “an illegitimate leader, a tyrant who treats his people brutally. But his tyranical mandate “will be crushed and broken”.

After this, Trump said: “With us in the gallery is the legitimate president of Venezuela, Juan Guaidó,”who proceeded to get up and receive the applause of congressmen and congresswomen in the -maybe- few bypartisan moments of the night. “Mr. President, please take this message with you to your homeland: All Americans are united with the Venezuelan people in their just struggle for freedom,” said the US president.

His speech was issued the night before the Senate would issue the verdict on his political trial, an issue he did not mention, and was considered primarily an election campaign speech, offered a few months before the US presidential elections.

Trump’s speech “was a manifest of falsehoods,” Nancy Pelosi, president of the House of Representatives, told reporters, who tore up the copy of Trump’s speech provided just after he finished, as a childish response to another childish gesture of Trump’s, minutes before by not shaking hands with her before beginning his speech. Analysts evaluate both gestures as an evidence of how politics are degraded in the US.

Then, the full statement of the Venezuelan Foreign Ministry:

Venezuela rejects Donald Trump’s interfering comments in speech to the the US Congress
The Bolivarian Republic of Venezuela strongly rejects and complies with denouncing before the international community, the intrusive expressions and the rude interferences in its internal affairs made by Donald Trump during his annual address before the US Congress. In an agonizing effort to revive the already unsuccessful strategy of government change by force, attached to a premeditated un-surprising script, amid a quasi-circus pre-election show and making use of a speech full of lies, chauvinism and supremacist statements, Trump offends and disrespects the Venezuelan people, by launching violent threats against its integrity and against the Constitutional, democratic and legitimate government of President Nicolás Maduro Moros.

The American head of state, in his delirious and arrogant speech, in which he seemed to resurrect the already obsolete manifest destiny, reiterated his contempt for peace, for international law, for life and in particular for the sovereignty of Venezuela, counting on the shameful complicity of those who are dedicated to betray the homeland, in exchange for the humiliating crumbs that he throws at them, depending on his mood, the Boss, Mr. Trump.

Quoting the Liberator Simón Bolívar, “The Venezuelan people will never allow the United States to plague our continent (Our America) with misery, in the name of a false freedom”. Venezuela has demonstrated this by far, not giving an inch of ground before blackmail, threat and interference, promoted, not by a head of state, but by a superb charlatan who fancies himself an emperor, who intends to dominate his country and the entire world through deception, extortion, ignorance and force. Venezuela is and will be irrevocably free and independent. Only the Venezuelan people determine and will determine its present and its victorious, sovereign and socialist future.

Featured image: Nancy Pelosi, Speaker of the House in the United States Congress, broke her copy of Donald Trump’s speech. “It is full of falsehoods,” she said when questioned by the press about the fact. Photo: Agencies.